This is the fourth post in a series looking at notable stories to be found within The Graphic Canon, volume 1.

The Tibetan Book of the Dead
By Sanya Glisic

I've never read The Tibetan Book of the Dead, but judging by this adaptation, which consists of a series of wordless images, I expect it must read something like this: "AAAAAAAGGGGHHHH!!! Oh shit, what is that?! It's a fucking monster! So many arms! Too many eyes! Oh fuck! Fuck! Fuck! Oh god, what's happening?! Where am I?! GHAAAGH!! NOOOOOO!!" And so on. Sanya Glisic's version of the book is a parade of freaky, horrific imagery, and I have no idea what it's supposed to mean (I guess the book describes the creatures one meets in the afterlife while being shepherded on to the next reincarnation?), but it's kind of cool as a collection of weirdness: 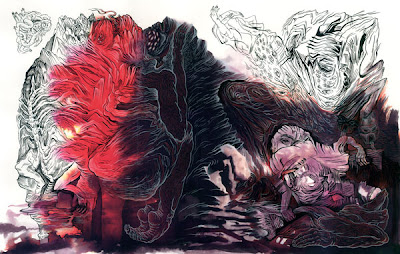 This is the Mayan story of creation, and it is so weird. The gods try to create people to worship them several times before getting it right, with the strangest attempt being making people out of wood that they end up destroying them by having their livestock, pets, and cooking implements rise up against them. The gods finally succeed by making people out of corn meal, but the people are too knowledgeable, making them too much like gods themselves, so the gods cloud their minds and make them normal humans. So strange, but I love the way Roberta Gregory illustrates it, with earthy colors, strange wooden people, and realistic, yet emotive animals. This is good stuff. 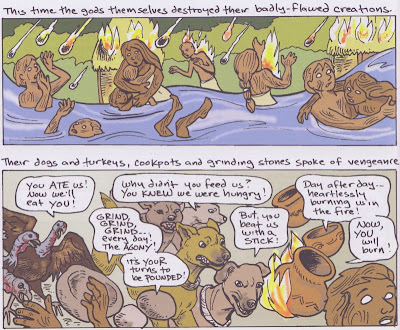 The Visions of St. Teresa of Avila
By Edie Fake

More religious silliness here, with a nun who was probably schizophrenic relating her visions of angels descending from heaven and spearing her through the heart. There's something kind of fascinating and glorious about the way she viewed the experience, but for those of us who aren't especially enamored of religion, it's weird and creepy. Edie Fake turns it into a scene out of a stained glass window, but with even more otherworldly colors and imagery that fits the descriptions but seems completely alien. Wow. 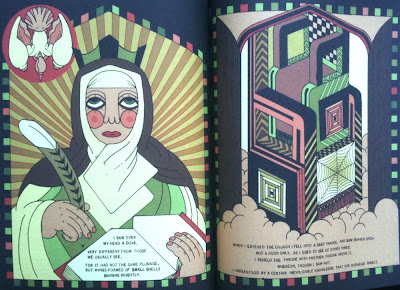