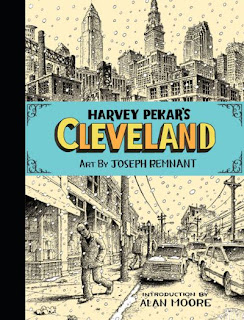 Now that Harvey Pekar is dead and we all miss him, we'll gladly accept any new comics written by him, even if they're not as good as they could be. That's the case with this book, which is pretty obviously completed from an unfinished manuscript. It's divided into two separate sections, the first being a history of Pekar's home city of Cleveland that is as dry as a school textbook and the second being more the sort of thing that Pekar was known for, a personal history of his life in the city. It's an awkward structure, and it seems like the script could have used at least one more revision, since the portions of his life that he recalls don't always have much to do with the city, and one anecdote, about the Twinkie filling that still runs in the pipes of a Hostess factory which was converted into a book warehouse owned by Pekar's friend John Zubal, is repeated in both sections.

There's still plenty of interest within, from Harvey's linking of the fortunes of the fortunes of his beloved Cleveland Indians to the spirit of the city itself to his revelation that the reason he became so well-read and adept at criticism was out of a desire to best his ex-wife in the area of literature. He describes the different Cleveland neighborhoods where he has lived, and goes into detail about his different romantic relationships. He spends a good portion of the end of the book describing his life as it was when he wrote it (he mentions being 70, and he was 75  which would have put this pretty soon before he died in 2010, so there was a gap of several years even when he was alive), and, heartbreakingly, he seems to look forward to the future, mentioning plans for several more books that he hopes to complete. It's obvious that he was taken from us too soon.

Artist Joseph Remnant does his best to liven things up in the early sections, and he ends up being a really good addition to the ranks of Pekar artists, bringing to life many, many scenes of Harvey walking the streets and talking directly to the reader. Remnant's style is somewhat similar to Robert Crumb's, with soft contours to his characters and densely textured shading. He keeps things pretty lifelike, without engaging in Crumb's often exaggerated cartooning, and there's a noticeable difference in the scenes when a newly-single Harvey is checking out women, in that they have reasonably-sized backsides.

All in all, it's not a perfect book (but what Pekar book ever was, anyway?), but it's a welcome one, a chance to spend just a little bit more time with that cranky old goat that we loved so much. Unless some lost masterpiece is discovered, it seems we'll have to take what we can get from the stuff still sitting in Harvey's file cabinets, and that's better than nothing.
Posted by Unknown at 6:00 PM