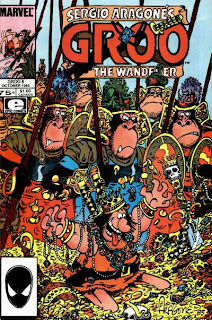 Looking through some issues, it turns out I had this one lying around somewhere and missed it; who knows what else lurks in my piles of comics? In this issue, Groo wanders into the ruins of an ancient city, thinking "I do not recall ever helping this town..." He soon ends up running into Taranto and his men, and even though Taranto tried to have Groo killed twenty times, he convinces Groo to help them find the lost treasure of the ancient city. Of course, this is really just so Groo can fight the army of ape-men who are defending it. And thus begins the regular series of hijinx, as Groo keeps screwing things up by wandering away from his guard post or deciding to dig for treasure instead of keeping watch, causing Taranto and his men to continually get mauled by ape-men. I especially like his response to being called "inept": 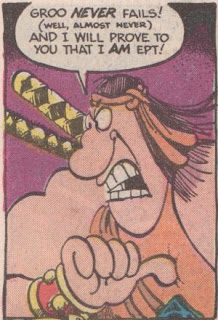 Eventually, Groo finds the treasure, but Taranto manages to trick him out of it, which leads to a crazy conflict between Groo, the ape-men, Taranto's gang, and the king who hired them to find the treasure, but unfortunately, we only get to see it play out in our imagination, since the final page sees them all about to run into each other. That's not a bad gag, but considering Sergio's talents for chaotic battles, I think the actual scene would have been better to see that whatever we could have imagined.

Still, Sergio did an excellent job filling the pages of this issue with detail. In every scene taking place in the ruins, the crumbling buildings are covered with carvings: 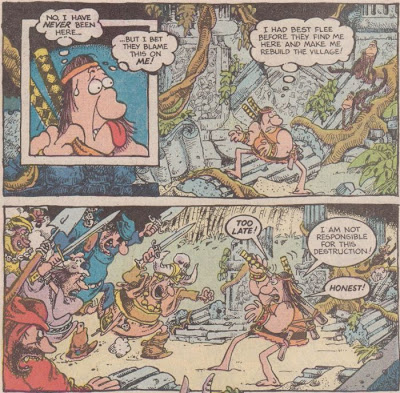 And the ape-men's armor has myriad ornamental flourishes as well:

And check out the reveal of the hidden treasure: I always look for little gags or jokes in these scenes, but they really seem more like bits of decoration and scenery that Sergio crammed into tiny spaces wherever he could. It's pretty amazing to see how much work he put into each and every page of the series, filling out and solidifying Groo's world such that his goofy antics stand out even more.

For some other, less interesting observations, I note that there is at least one anachronism in this issue, including Taranto and his men trying to get Groo's attention during a fight by shouting "Paging Groo!" There's also a phrase which isn't really anachronistic, but it makes me think of something quite different than it would have back in 1985: 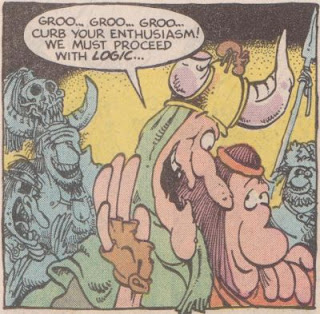 And finally, on the subject of violence, I think this scene depicts Groo beheading a guy, although the sanitized nature of the series at this point doesn't make it clear. It's still funny though:

Hidden message(s): An ape-man seems to speak in gibberish on this page, but if you unscramble his words, it says, "This is the hidden message for this issue! There is one in every issue since four, says Mark!" Moral: "When you double-cross a friend, you triple-cross yourself."
Spanish words: None
Running jokes: Cheese dip, "Did I err?"
Mark Evanier's job(s): Renderer
Letter column jokes: The jokes start with the image at the top of the page, in which Groo is reading a letter (upside down) that says: "Dear Groo, what does Mark Evanier do? Have Sergio send me a drawing. Why do you eat cheese dip?" In the actual letter column, Mark says that there is no Groo fan club and in response to what it would take to start one, "a modicum of taste and intelligence." Robin Bougie asks how fast Sergio can draw, and Mark says that Sergio is starting to resent the implication that he just knocks the comics out in no time. As Mark says, "The way I figure it, Sergio draws about three times as fast as anybody else and he puts about three times as much drawing on a page as anyone else so it comes out about the same." One writer asks what Groo's most-used expression is, "cheese dip" or "Did I err?", and Mark replies that his most-used expression is "Opps". I'm not sure if that's a typo or some sort of meta-joke. Finally, Mark gives his infamous answer to the question of what the blue thing is on Groo's chest, saying that it's a Walkman. Classic!
Posted by Unknown at 6:00 PM