The Neverending Fray: It can't be said enough: never bet on Groo 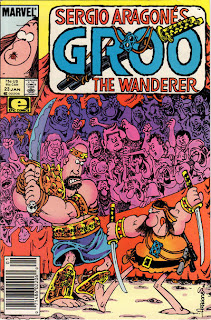 This is another in a string of good issues, setting up a funny situation and then milking it for jokes. Plus it introduces some excellent supporting cast members in Pal and Drumm, who fit into the classic comedy duo mold as a short, smart guy and a big, dumb guy. We meet Drumm as kind of a comparison to Groo, a strong fighter that makes people afraid, but he does it on purpose, bullying his way into free food and drinks and boasting that he can defeat anyone. Pal, who exposits to himself about being wanted for running crooked games of chance, sees Drumm as a money-making opportunity, planning to bet on him when he fights Groo and make money when he wins. But Groo makes short work of Drumm, and Pal loses a bunch of money. So he changes tactics and recruits Groo as part of the scheme, planning to travel to new towns, build Drumm up as an unbeatable fighter, then make money by betting on Groo. As we know, plans based around Groo are destined to fail, and they do so in several funny ways here, with the mendicant beating up Drumm before anybody got a chance to place a bet, beating up the people for mocking him, or beating up Pal for calling him a moron. When he finally manages to get it right, he decides to do a good deed, since Drumm is acting more and more depressed that he continually has to be humiliated in front of everyone, and takes a fall that not only ruins Pal, but also a king who bet his treasury against the possessions of his subjects, making for a satisfyingly layered ending that not only has everyone chasing Groo but also a popular revolution against tyranny: 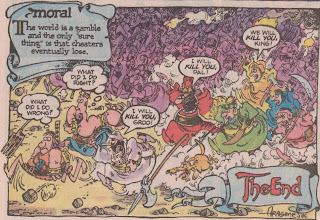 And as usual, the issue is crammed full of details, whether in the day-to-day lives of those who are unfortunate enough to have Groo wander into their villages, or in the sheer chaos that can happen at a moment's notice when he is around: 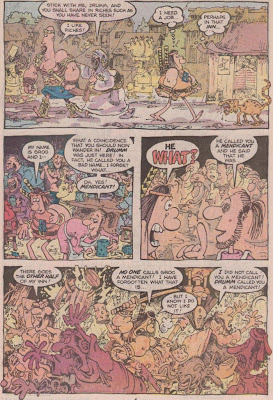 I like the way this hapless fellow is cleaning the edge of a panel before he gets sent to be thrashed by a sleepy barbarian: 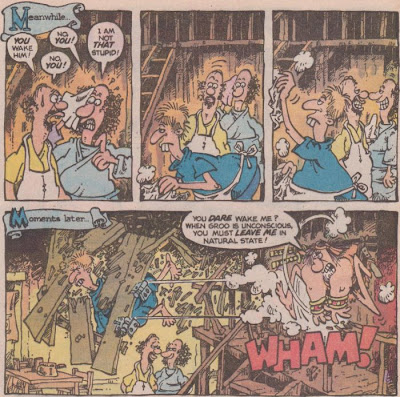 And here's a decent bit of wordplay: 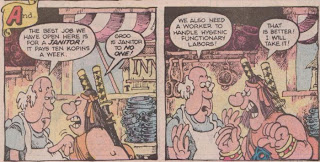 This issue's stats:
Recurring characters: This is the first appearance of Pal and Drumm, who would show up many more times. Also, at least three of the Groo Crew (Sergio, Mark, and Stan; I don't see Tom, unless he's way over on the left) are cheering on the Drumm/Groo fight on the cover.

Hidden message(s): A letter can be found in the artwork on each page, and putting them together spells:

Also, Pal mentions being banished by the queen of Onovid, which, spelled backwards, is a reference to Mark Evanier's friend and co-writer- Sharman DiVono.
Moral: "The world is a gamble and the only 'sure thing' is that cheaters eventually lose."
Spanish words: None
Running jokes: Drumm enrages Groo by calling him a mendicant, and Groo can plainly see some workers. I also like this variation on "Groo does what Groo does best!":

Mark Evanier's job(s): Prolocutor
Letter column jokes: Mark makes what I assume is a potty joke when he responds to a question about how much Groo #2 will be worth in the year 2001 by saying that it will still be #2. He also promises that Sage will return in a few issues, at which point we will learn his dog's name, and that a Groo graphic novel is in the works, but he doesn't know when it will be out. And he gives a decades-early sample of the script for Groo vs. Conan:


CONAN: By Crom! You are a mendicant!
GROO: Oh, I am, am I? Well now, Groo does what Groo does best!
SOUND EFFECTS: Hack! Slash! Slice! Spurt! Poke! Et cetera!