The Neverending Fray: Vapidity vs. stupidity 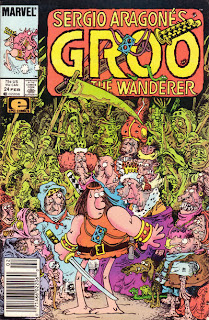 Groo gets more recurring characters to bounce off of in this issue, when the Minstrel seeks him out for help with Arcadio's current quest, in which he has to find a spell to free the people of his village (where we saw him last, in issue #11) from a curse. This might just be a contrivance of writing to get Groo involved in the story, but I think it adds an interesting wrinkle to the Minstrel's character. He spends all his time when he's with Arcadio praising the handsome warrior's abilities, but he seems to recognize that while Arcadio looks impressive, he doesn't have much in the way of skill, so he runs to get Groo's help at the earliest opportunity, since Groo was the one who did all the work in their previous quests. He might sing Arcadio's praises in order to share in his rewards, but he knows what's actually going on, making him more aware of the mechanics of this world than most of the characters. It makes sense, since he's not only a storyteller, but an entertainer, an implicit collaborator in the enjoyment of the audience.

And of course, Groo manages to screw things up repeatedly, first obtaining a potion to cure the people, but since the last time he saw them, they were horrifically ugly, he thinks the curse they're under is that they're beautiful (instead of mind-controlled into a daze by never-stated means), so he turns them ugly again (I guess the potion just obeys the wishes of its dispenser) and runs off to procure payment for the potion. When Arcadio finds them, he only has obtained one magical cure, so he uses it to turn the people beautiful again and sets off to obtain another cure, setting off a back-and-forth series of transformations as Groo and Arcadio repeatedly discover that their transformations have been undone and set off to make them the way they should be.

That's good stuff, with a nice punchline that sees Groo transform everyone, including Arcadio and the Minstrel, into their hideous selves, which makes for a great visual: 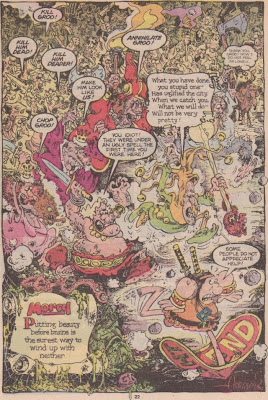 As with the previous issue involving ugly people, Sergio really delivers on the grotesquerie, giving people gross skin lesions that make it look like their faces are dripping off: 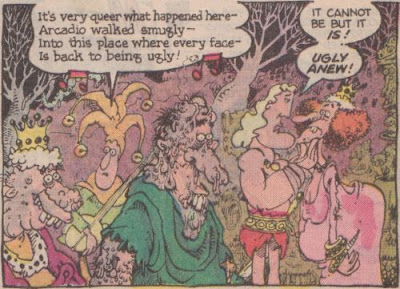 Or transforming a voluptuous girl in a belly shirt into one that is...not as attractive: 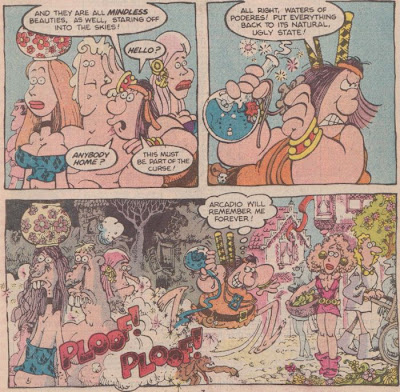 There are some great bits involving Groo's antics as he completes the other parts of his quests, which involve procuring various chess pieces for a witch from a rich king. First, he has trouble getting in to see the king, but he provokes a fight with the king's men in order to get what he wants: 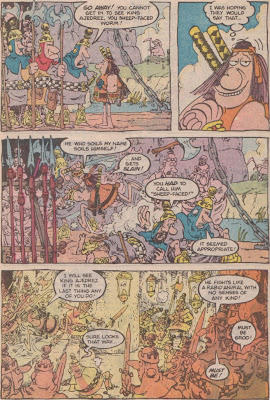 Then later, he can't remember what he's supposed to get for the witch, so he just attacks the men, expecting to figure it out eventually: 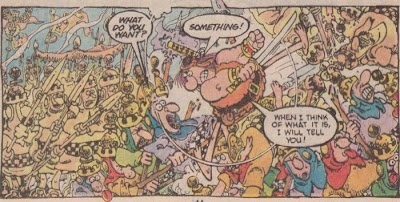 That's funny stuff. This issue does get a little repetitive, but it's always funny, with Mark providing laughs through dialogue and Sergio filling pages with his usual details to create a satisfying whole. I'll take it.

Hidden message(s): I didn't spot any "verbal" messages, but there's a visual one when the head of the Minstrel's lute takes the form of different members of the Groo Crew in subsequent panels:

UPDATE: As revealed in issue #32, taking the first letter on each page (including both pages of the title spread), reveals the message "Jack must get his work back", a call for Marvel Comics to return Jack Kirby's original art pages to him (if you're not familiar with this bit of comics history, here's a transcription of a 1986 radio interview with Kirby, Mark Evanier, Frank Miller, and Steve Gerber discussed the issue).
Moral: "Putting beauty before brains is the surest way to wind up with neither."
Spanish words: King Ajedrez, who Groo takes chess pieces from, has a name which means "chess". The Waters of Poderes ("powers") make another appearance.
Running jokes: Cheese dip. Groo can plainly see a white bishop. A scene change after someone calls Groo "slow of mind", he thinks, "Say, what did she mean, 'slow of mind'?" I'm pretty sure this happens again, with longer and longer intervals between the original statement and Groo thinking about it. And the gag about Groo being inept from last issue threatens to become a regular thing: 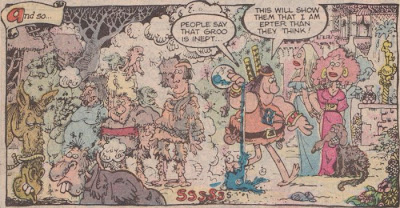 Mark Evanier's job(s): Denubilater
Letter column jokes: Mark continues to insist that he won't define mulch anymore, even if people ask him using silly letters composed of backwards words. He also claims that we'll learn Sage's dog's name in his next appearance, says the stuff in Sage's vial is Perrier with a twist of lime, and says the skull on Groo's belt is Groo when he was a baby (?). The best joke this time is when somebody asks "When's the movie?", presumably wanting to hear news about a Groo adaptation, and Mark gives showtimes for "Black Kung Fu Mamas" and "Nurses Go Berserk" at the Criterion. Finally, a reader asks about seeing Mark's name in the credits of the "Dungeons and Dragons" cartoon, and Mark admits that he works on that show (or worked, since it had recently been cancelled), along with "The Wuzzles", and he also developed a show "about tiny people" that was so bad, he took his name off it. Does anybody know what show that one was?
Posted by Unknown at 6:00 PM