Not the Israel My Parents Promised Me: I believe it

Not the Israel My Parents Promised Me
By Harvey Pekar and J.T. Waldman
Published by Hill and Wang 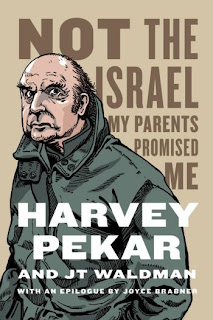 The ever-raging turmoils (political and otherwise) surrounding the nation of Israel and the Jewish people are nearly too much to wrap one's brain around, with the weight of thousands of years of history and countless atrocities, prejudices, genocides, and plain old wars surrounding them. And that's true even for somebody who has been thinking about these issues for decades, as Harvey Pekar obviously had; it seemed like he needed to get his thoughts on the subject down while he still had time, and that's what this book is: a discussion of what had been troubling him for years about his people and the travails of the "homeland" that his staunchly Zionist parents had been so supportive of. But he also wants to be sure that readers take him seriously as something of an authority on the subject, rather than just some guy with an opinion, so he spends much of the book detailing the history of the Jews, both before and after they managed to form the nation that has been the center of so much contention. 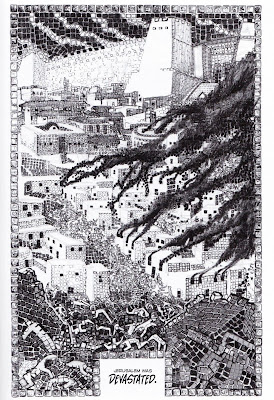 Pekar frames the story as a conversation between himself and his artistic collaborator, J.T. Waldman, as the two of them drive around Cleveland, stopping at the book warehouse mentioned in Harvey Pekar's Cleveland, as well as the Cleveland Public Library, and seeing other sights around the city. One suspects that Waldman, who is credited with an "and" rather than as mere "illustrator" of Pekar's words, was something of a co-author, reproducing his interactions with Pekar and filling out what was probably an unfinished script upon Pekar's death. The talk ends up being a torrent of information, with Harvey starting his brief history of the Jews with Abraham, and following them up through the present day, pausing occasionally to go over his own history, including his parents' wholehearted support for Israel, his Jewish-school education, his misguided attempt to immigrate to Israel in the 60s, and his eventual disillusionment with Israel and its relationships with its neighbors, the Palestinians living within its borders, and the rest of the world. 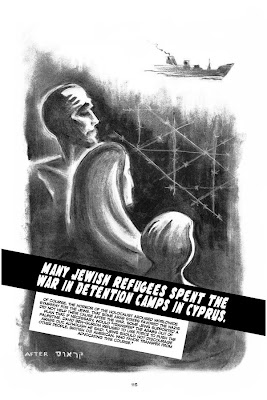 As interesting as Pekar's disquisition is, Waldman is the real star here, grounding the framing conversation scenes with a realistic style, then shifting into styles reflective of the eras being discussed, starting with Chaldean carvings and Mediterranean mosaics, and progressing to ornate Arabic/Persian designs, Medieval murals, and Renaissance artwork, then, when the narrative jumps to the twentieth century, mimicking styles like art deco and World War II propaganda posters. He's a restless artist, never sitting still, always jumping to a new artistic idea, especially in later scenes depicting Harvey's shifting ideas about Israel as files that fill the cart he pushes around at his V.A. job, or complicated emotions swirling around him like his beloved jazz music. And he doesn't stop there either, turning the scenes in which he and Harvey are driving around the city into meandering paths of panels winding across the pages and including lovely reproductions of some of its landmarks. It's incredible work, visually arresting and constantly moving, taking what is already an interesting subject told by a rightly revered storyteller and bringing it to the next level. 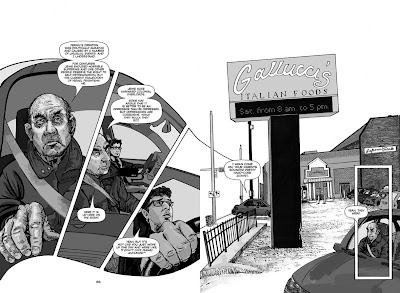 There's a reason Harvey Pekar is missed so much by those who loved his work, and that's because he put so much of himself into his comics, pouring his life and passions onto the page. He was always fascinated by people's stories, and that gets writ large here in a history of an entire race, which collides with his autobiographical impulses to form a grand story as tangled and convoluted as its inspiration. One might be somewhat disappointed to learn that in the end, for all his personal experience and studies, Harvey doesn't really have any answers or special insights into the situations faced by his people, but it's kind of comforting that he's in the same place as the rest of us. Maybe he would have been able to work out some sort of defining statement had he lived long enough to see the book's completion, but as it is, it ends on a perfect note of frustration, an aggravating inability to find a solution to the problems created by the human condition. That's the world we have to live in, even if we have to press on without Harv to guide us.
Posted by Unknown at 11:23 PM