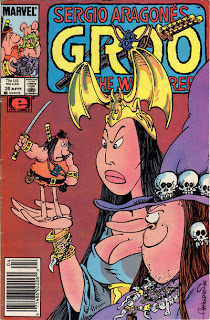 It's another issue with recurring characters, with the witchy pair Arba and Dakarba showing up to get Groo to do something for them. Their earlier appearances mostly seem to consist of one or both of them trying to get their magical powers back, and in this case, Dakarba sends Groo to get an amulet for her, even though she and Arba both seem to expect him to fail. The shrink him down to tiny size and send him to invade an underground city of tiny people (elves? They have pointy ears and wear genie clothes, so who knows), which leads to all sorts of silliness when he ends up going on another quest to steal the other half of the amulet from somebody else, then eventually obtaining the combined amulets, which grant the owner great powers, but he's too stupid to realize it, causing him to ruin everything for everybody just get them all mad at him. So, a pretty normal day in the life of Groo.

There's plenty of funny stuff, mostly centered on tiny Groo having size-related screwups, like attacking some guards who don't even notice him:

Or trying to find a bird to ride:

He still proves deadly, or at least injurious, though: 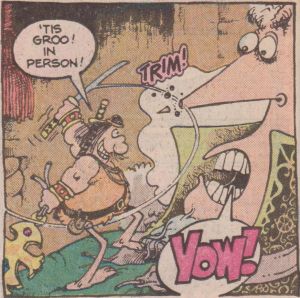 Another good thing about witches is that they give Sergio the chance to go nuts with ooky detail when depicting their lairs, as he does on the title page of the issue: 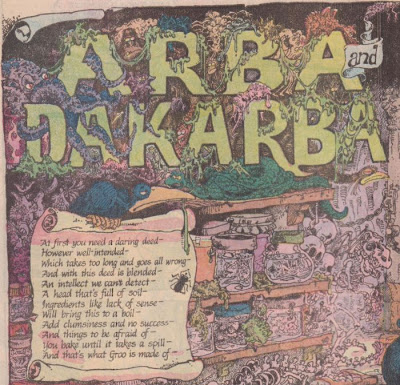 I love all the stuff that he packs into that scene, the monster skeletons, spiderwebs, and weird creatures cluttering up every square inch, half of them stuffed into jars and beakers, all sorts of slime and ooze and crows and black cats and snakes covering everything. It's awesome. But while Sergio always went to town on the title pages, he never sacrifices the detail in the rest of the issue, and he sometimes just throws strange stuff in there, like these crazy giant snails:

I love that kind of thing, and I love that this world that Sergio and company have created gives him a chance to throw whatever he wants onto the page, no matter how weird or silly.

This issue's stats:
Recurring characters: Arba and Dakarba. I'm not sure if the Great Wizard has shown up before, but Groo seems to know him, so he was probably in one of the issues I don't have.

Hidden message(s): It's not easy to see as it's printed on the fading paper of the issue I have, but you can see it printed on a book that's somewhere amid the clutter of the title page: 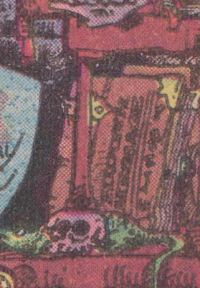 Moral: "When the employee is a fool, so is the employer."
Spanish words: Enano, the name of the tiny king, means "dwarf."
Running jokes: The "What did she mean, 'slow of mind'?" callback takes place a full two pages after Dakarba says it to Groo. Groo can plainly see a mystic amulet, and he says that he never blunders, but he does err sometimes, including later in the issue, when he says "Did I err?". And he even calls himself a mendicant: 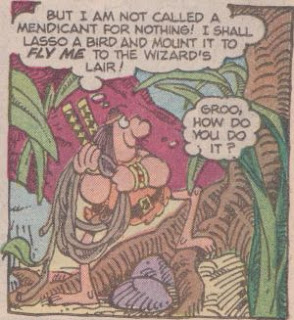 Mark Evanier's job(s): Alchemist
Letter column jokes: This issue's letter column is just one joke, with a letter from editor Jo Duffy saying that the column will have to be shortened to make room for the Statement of Ownership, and a response from Mark in which he refuses to abridge his work, and threatens to bankrupt Marvel like they did Pacific. Incidentally, the average number of copies sold for the previous 12 months was 109,375, with the most recent issue selling 116,810 copies.
Posted by Unknown at 6:00 PM