The Neverending Fray: To defeat the enemy, you must become him 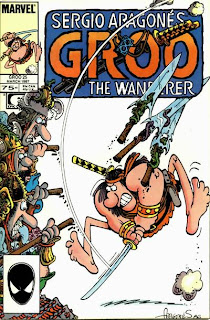 This is another wacky farce issue that involves Groo running back and forth a lot, and it's as funny as one would hope. The pacing is a little weird, with Groo first wandering into a town and the people greeting him with horror, since they've survived all sorts of disasters, but worry that he'll be the last straw. But when he can't find work as a guard, since the village is already well-defended, he leaves without causing any problems. Then the real meat of the story begins, as he finds some people fleeing a town that is being sacked by bandits, takes up their cause and drives the bandits away, then runs into Taranto and his band of bandits, who decide to go attack the town themselves. This sets off an escalating series of attacks and defenses, with Groo eventually taking a page from The Seven Samurai (as he already did once in issue #4) and deciding to train the people to defend themselves, but not before the town gets completely destroyed, leading everyone to just go and attack the original town from the beginning of the story, which we had mostly forgotten about. Looks like they didn't survive Groo after all!

It's amusing enough, as these things go (although that's a pretty dark ending, with Groo leading the exploited and their exploiters off to destroy someone else's lives), with much of the humor coming from the individual details and smaller moments, like a boy from the besieged village recognizing how to exploit Groo's desires:

I enjoy this bit of wordplay too: 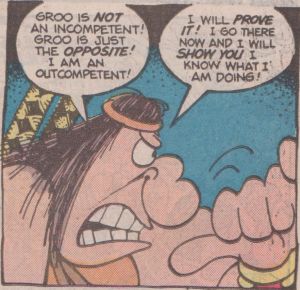 Good stuff, for the most part, although the issue isn't as well-structured as the best Groo stories, which click through their plots smoothly and lead to an inevitable goal. It's still pretty funny though, so I'll accept it.

Hidden message(s): I didn't find the hidden message, but I did notice the following message written on a stein on the title page: 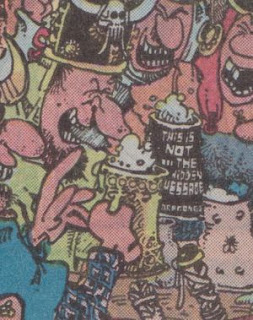 UPDATE: As detailed in issue #32, in a crowded battle scene near the end of the issue, you can see the following message on a soldier's back: 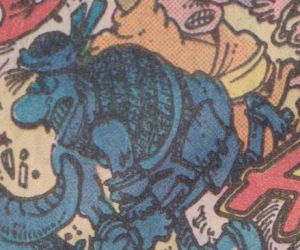 It's hard to read, but it says "And this is not the hidden message but it's on this page." At the top of the page, hidden within a sound effect, you can see the usual message written upside down:

Moral: "To flaunt your strength is to make it your weakness."
Spanish words: Carpeta, the name of the well-guarded town, means "folder". Alfombra, the not-so-well-guarded town, means "carpet". Turulato, the leader of one of the groups of bandits, means "nincompoop".
Running jokes: This issue, the "Say, what did he mean, 'slow of mind'?" gag takes place a full page after somebody says it to Groo. Groo can plainly see the answer to defeating the bandits.
Mark Evanier's job(s): Enunciator
Letter column jokes: This issue's column consists entirely of answers to a list of numbered questions from letter writer Andrew Stern, with answers including a reference to the poor ratings of "TV's Bloopers and Practical Jokes" (which Sergio did animation for), references to Sergio's poor English (and the revelation that Mark has known him since 1969), a joke about Sergio missing the Creation Comic Convention in Anaheim because he had to go back to his job at Disneyland wearing a Dopey costume, an odd dig at Marv Wolfman, an appearance by editor Jo Duffy to reveal that there was a Groo story in Epic Illustrated #27, and a revival of the joke that nobody knows what Mark's job is.
Posted by Unknown at 6:00 PM