Comix Canon Club: Might as well end with the fall of man

This is the sixth post in a series looking at notable stories to be found within The Graphic Canon, volume 1.

As is the case with most everything I read by Rebecca Dart, this might be my favorite selection in this book. She takes John Milton's revered literary classic about God, Satan, Adam, and Eve, and boils it down to twelve pages, rendering it as basically as possible, with simple shapes standing in for the characters, but then illustrating those shapes with gracefully textured brushstrokes that give everything an epic sweep. The result is  a version of the story that divorces the context of its Christian ties and turns it into a basic mythological struggle between good and evil, and it's awesome to behold. I wish Dart would do more comics, because everything I see from her is gorgeous, the kind of thing I want to look at for hours, and I want more of it, like some kind of envious supernatural force. 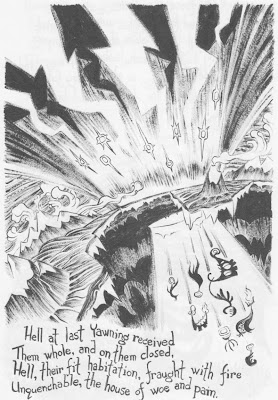 That's it for the stories I specifically wanted to single out, but here are some others that I enjoyed very much:

The Iliad, by Alice Duke
Outlaws of the Water Margin, by Shawn Cheng
Hagoromo, by Isabel Greenberg
Journey to the West, by Conor Hughes
King Lear, by Ian Pollock
Don Quixote, by Will Eisner
Candide, by Ian Ball
"Letter to the Royal Academy of Brussels" (a.k.a. "Fart Proudly"), by Stan Shaw

In short: it's a good book, and I'm looking forward to the next two volumes, after which I will be completely caught up on world literature.
Posted by Unknown at 6:00 PM