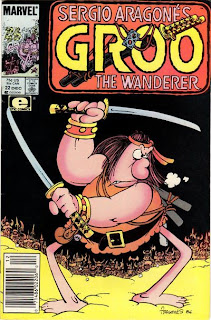 This issue is a pretty classic example of setting up one joke and then running variations on it for an entire issue. Groo arrives in a kingdom at the same time as an ambassador from a nearby land who is trying to arrange a peace treaty. But the gag is, the ambassador's name is Gru! So everybody is constantly mistaking them for each other, with the ambassador getting beaten up wherever he goes. Groo even starts working as his bodyguard without either of them realizing the misunderstanding: 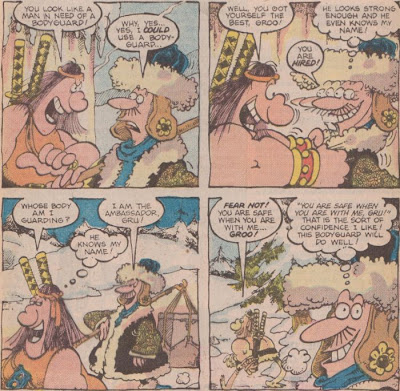 Eventually, the attempt at peace fails and the kingdoms plunge into war, all because of some confusion about a name. That's good comedy. And Sergio gets to do plenty of what he's great at, including a surprisingly large mountain of bodies after one fight: 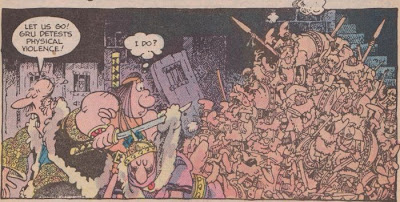 And he plays up Groo's simplemindedness once the two homonymic men discover the cause of the confusion: 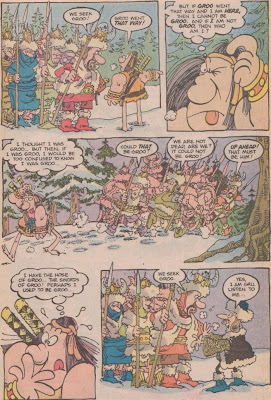 That's good stuff. I bet there will be more next issue.

This issue's stats:
Recurring characters: This is more of a cameo, but the Groo Crew (Sergio, Mark, Stan, and Tom) can be seen as members of King Rana's army: 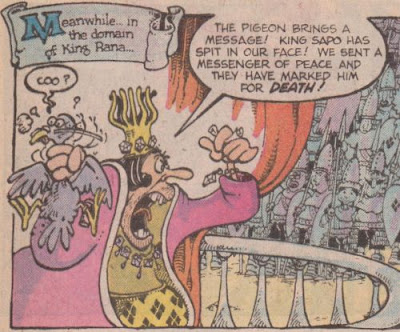 Hidden message(s): It's written upside down on a sign in this panel:

Moral: "People are all unique--but some are more unique than others."
Spanish words: None
Running jokes: Groo has terrible table manners, and he gets upset when somebody says he is a "gourmand", which is kind of a variation on the "mendicant" joke.
Mark Evanier's job(s): Dehaverel
Letter column jokes: Mark spends the entire letter column printing one-sentence letters (including ones from Jo Duffy and Archie Goodwin) that ask what "mulch" is, and replying that they don't do that joke anymore (he does screw up and start to define it once, but catches himself after a few words). And that's all.
Posted by Unknown at 6:00 PM