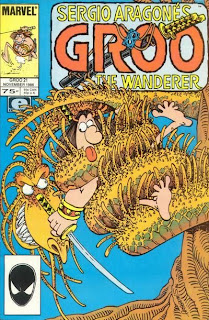 As we saw back in issue #6 of the Pacific volume of the series, pitting Groo against magicians can lead to some very funny results. This issue sees our "hero" wander into a land of witches and wizards, where he encounters a pair of characters that will become the main magic-using members of the supporting cast, Arba and Dakarba (we don't learn their names in this story though), and gets involved in a conflict between them and Grativo, the surviving wizard from the aforementioned issue, and also meets up with the Witch of Kaan, who apparently appeared in one of those Pacific issues that I haven't read. Groo gets to fight a bunch of apparitions, and he also confuses Arba for one: 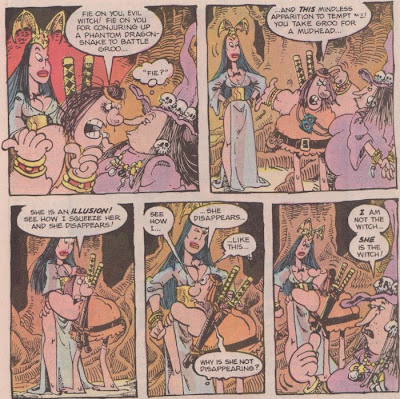 We learn that Arba is Dakarba's daughter, which I don't think I knew, and that Dakarba had her witchy powers taken away by Grativo, so the witches recruit Groo to help them get them back. This involves acquiring a potion from the Witch of Kaan, who will only give it up if Groo retrieves her glass eye, and this leads to an amusing sequence in which he asks a random guy if he knows where it can be found, causing the guy to panic and spread the news of Groo's approach until it reaches the king, who orders the eye taken to Groo quickly: 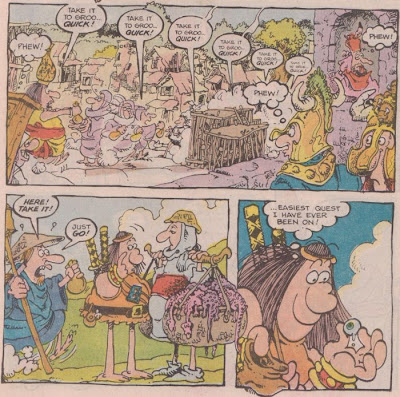 Groo eventually ends up in the middle of a fight between Grativo and the witches, which turns into chaos when one of them gets the bright idea to duplicate him a bunch of times, allowing Sergio to come up with a ton of variations on Groo's clueless/confused expression: 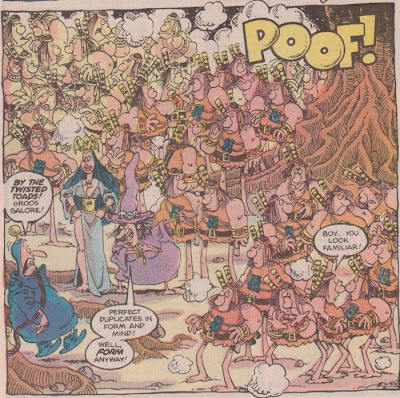 This must have been the fulfillment of either a dream or a nightmare for Sergio, who was said to have regularly doodled Groo for years before creating a series around him. It's a pretty funny scene, and even though it only lasts two pages or so, Sergio and Mark throw in a whole bunch of good jokes about the Groos getting into dumb arguments and fighting amongst themselves.

The whole issue has plenty of funny stuff, but it's kind of odd, possibly trying to set up a hierarchy of magical characters that Groo can bounce off off in the future. Of those, only Arba and Dakarba really lasted, since their interactions with Groo, in which they try to use him to pursue their goals, makes for more interesting stories than Grativo's antagonism or the Witch of Kaan's apathy.

As one would expect, there are plenty of good gags and details here, including a neat bit of formal play in which Groo fights a dragon that he spotted on the title page, and the credits box is still visible by its feet: 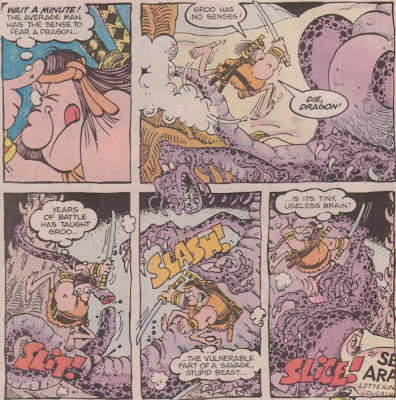 I also like the way he moves across the tier of panels, climbing up the dragon to reach a killing position. It's a neatly-structured sequence.

In a less impressive but still funny moment, here's some nudity that nobody was asking for:

Good times, as always, and with the ever-growing supporting cast, there should be plenty more to come as we meet characters for Groo to team up with, antagonize, and get chased off by on many a final page.

This issue's stats:
Recurring characters: Arba and Dakarba, Grativo, the Witch of Kaan

Hidden message(s): Either these are getting easier, or I'm finally getting the hang of finding them. This one is written upside down on some rocks (or is that part of a monster?) in the lower left corner of this panel: 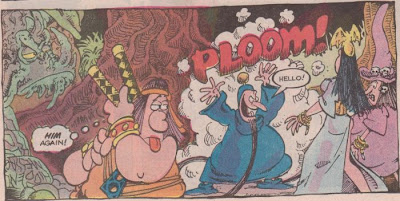 Moral: "When you wander near evil, security is only a function of foolishness." I'm not sure I get this one, since it really only applies to this story rather than being the sort of universal lesson that the word moral implies. I'll take it as a prophetic look at the politics of the George W. Bush administration, since that makes as much sense as anything.
Spanish words: Brujas, the land where the witches reside, means "witches" in Spanish, which I learned from reading Love and Rockets. The magical potion is called the Waters of Poderes, which means "powers".
Running jokes: "Did I err?", cheese dip, Groo and all his duplicates can plainly see that the witches made a mistake, and they also shout a bunch of variations on "Groo does what Groo does best!":

Mark Evanier's job(s): Transilluminator
Letter column jokes: Most of the column is taken up by revealing the locations of all the hidden messages in issues #4-12 (I'll go back and update the entries for the issues where I didn't find it, which is most of them; it looks like my problem is that I was looking for the words "hidden message" somewhere in the artwork, but most of these are some variation on "take the first letter of every word on a certain page", which is much more annoying to search for), but the one letter printed attempts to get Mark to define mulch (he says they don't do that joke anymore) and clamors for Stan Sakai to get some recognition, pointing out his "Usagi Yojimbo" comics in the anthology series Albedo Anthropomorphics, published by Steven Gallaci and Valco Graphics. Mark replies by getting upset that a plug for Stan Sakai would result in people finding out how good he is and buying lots of his comics, causing him to quit lettering Groo, which would make Mark lose his job due to the lack of words in the book, and then he would be out on the street and probably die.
Posted by Unknown at 6:00 PM