The Neverending Fray: Victory at last, in a Pyrrhic fashion 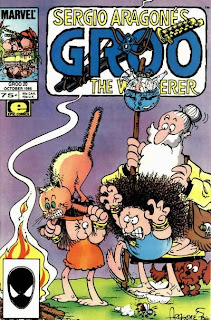 This is the third issue in a row that follows the template of Groo screwing things up for Grooella while occasionally pausing for fond (for him) memories of their childhood. Luckily it's not too repetitive though, since Sergio and company come up with a surprising number of ways he can either ruin her plans or manage to infiltrate the castle (which, as you'll recall, is Grooella's, but has been taken over by her enemies, the Cominos) ineffectually. The best of these builds to a wonderful double reversal in which the Cominos scheme to get Groo to think the north wall is undefended so Grooella will attack there, which gives a hilarious example of Groo's obliviousness, especially when somebody is trying to hint at something: 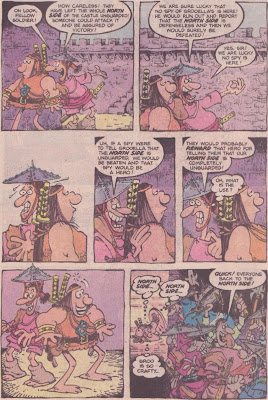 Since plans based around Groo nearly always fail, it looks like they will get some comeuppance when he misreports the information to Grooella, but since he is never right, she decides to do the opposite of what he suggests, and sends her men right into the Cominos' trap. That's a great play on expectations, and an example of the creative team's ability to wring endless variations of jokes out of Groo's ineptitude and how it affects those around him.

Groo eventually decides that the best way to help Grooella is to find the Sage and have him figure out what to do, which gives us this great moment of comic reaction and silly verbal humor: 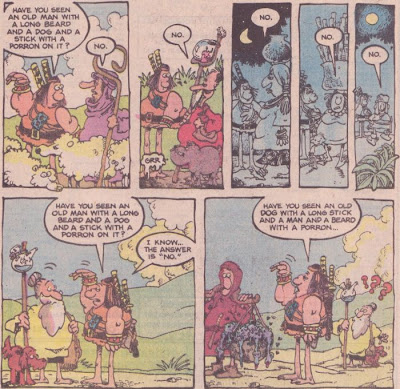 And while the Sage does bring an end to the siege, Groo manages to ruin everything by not telling him a key piece of information, providing a handy finish to the story with another example of comic variation, as both Groo and Sage get chased away by an angry mob. Even when a story lasts a bit longer than it needed to, it can still contain a ton of great gags and funny moments. Little more needs to be said, so I'll end with this panel, which captures Groo's fighting philosophy perfectly: 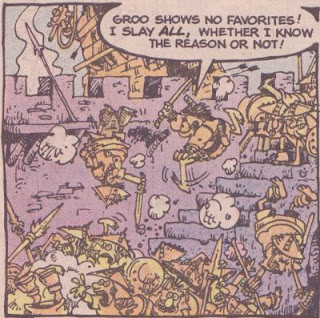 
This issue's stats:
Recurring characters: Grooella, and Sage appears in the present this time

Hidden message(s): Found another one! Check out the "pattern" on the flag in this panel: 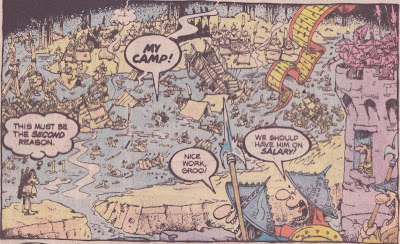 Moral: "When you invite relatives, they never seem to leave your home, so long as it is still standing."
Spanish words: Cominos, one last time.
Running jokes: Groo can plainly see an empty mine shaft, and he says "Did I err?"
Mark Evanier's job(s): Traditionist
Letter column jokes: Two separate letters ask about why the characters never change their clothes (which implies that they never wash them), and first Mark says that the question should be why Sergio never changes his clothes, and then jokes that they must have missed the scenes where Groo went to the laundromat and Sage bought a bunch of yellow dresses from K-Mart. Later, he hints that the name of Sage's dog will be revealed soon, says the blue rectangle on Groo's chest is a frozen pop tart, and reveals the location of the hidden message in issue #14. Luckily for me, he also notes that the next issue's letter column will reveal the hidden messages in issues 4-12. And finally, the correction of a typographical error in a previous issue leads to a joke in which Evanier supposedly insults the typographers, but they replace his insult with a bolded and emphasized compliment saying that they deserve substantial raises and longer vacations.
Posted by Unknown at 6:00 PM