The Neverending Fray: No, family is just a curse 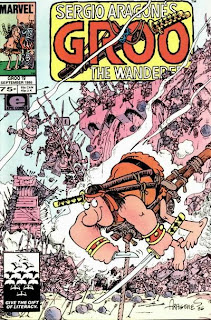 The Groo Crew seem to have uncovered a rich vein of comedy with the introduction of Groo's sister and the flashbacks to their childhood, such that they stretched this story out to three parts, with the siege of Grooella's castle running in place for an issue in order to stretch out the shenanigans as long as possible. There is certainly some amusing business here, with Grooella ordering her men to kill Groo, Groo fleeing and somehow ending up inside the castle, then driven out to rejoin his sister and screw up her plans as much as possible. But the real focus of the issue seems, once again, to be the flashbacks, which continue to illuminate Groo's self-delusions about his relationships with those who survive experiences with him or are required by familial ties to tolerate him. It's the most emotion we've ever seen from him, and while it's yet another example of his cluelessness, it's kind of touching to see him express affection for something other than food and fights: 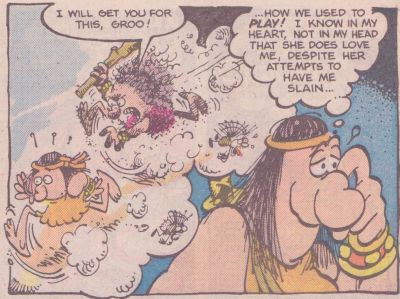 It's not all flashbacks and sibling abuse though; Groo gets in a good amount of funny business elsewhere, including a variation of the gag in which he tries to figure something out that contains words, with Groo's confused thoughts just making it funnier, up until he gives up thinking and just goes to look for something to eat:

And speaking of abuse, Groo manages to mangle some of his opponents in impressively funny ways, including jamming fingers in one guy's nostrils:

And stuffing a shovel in a guy's mouth: 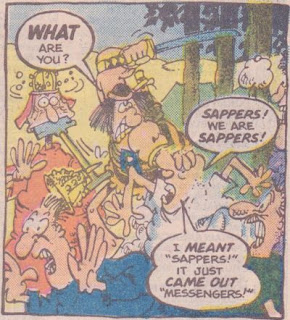 I'm not sure if there's enough story here to fill another issue, but by establishing the framework for future looks at Groo's childhood, the time spent is worthwhile. There's nothing like childhood trauma to illuminate the state of one's mental health as an adult.


This issue's stats:
Recurring characters: Grooella, and Sage in the flashbacks

Hidden message(s): Found one! The image atop the letter column contains exactly the type of hidden message I always expect to find, written on the piece of paper stuck to Groo's sword:

Moral: "It matters not how grand your plans when they are built on a faulty foundation."
Spanish words: Cominos again, if that counts.
Running jokes: There's a mention of cheese dip, Groo can plainly see that Grooella is building a siege tower, Lil' Groo says "Did I err?", and this seems like an attempt to replace the running mulch joke with something even grosser:

Mark Evanier's job(s): Adjutant
Letter column jokes: This issue's column is dedicated to retiring the running joke of defining mulch, although first Mark describes what a running joke (or "running gag", as he calls it here) is, saying that it takes something unfunny and makes it funny through repetition and that it is a lot easier than thinking up new jokes. He says the constant repetition gives the appearance of humor, a trick he learned from watching "Late Night with David Letterman", which I think is a compliment rather than a dis. As examples of running jokes within the pages of Groo, he mentions "Did I err?", "...as any fool can plainly see!" "And now, Groo does what Groo does best!", and cheese dip, along with the phrase "Must be Groo!", which was one that I hadn't thought of. As a reason for retiring the mulch joke, Mark says they've run out of variations on it, but after defining mulch one last time, he suggests that the next running joke will be decided on the Sage's dog's name, which was eventually revealed to be--wait for it--Mulch.
Posted by Unknown at 6:00 PM