The Neverending Fray: This issue is surprisingly comfortable with slavery 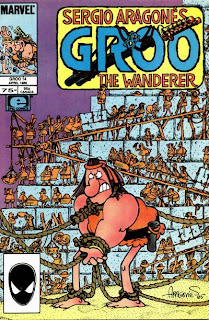 This issue seems like a chance to have Groo cause a bunch of trouble at a building site, but in doing so, it kind of undermines the attitude about slavery which was established in issue #5. Or maybe he's just too stupid to realize what is going on, but the fact that he ends up in the middle of a slave labor camp (where a pyramid is being built) and doesn't seem to care about the suffering of those interned there is kind of offputting. He does decide to get a job there though, leading to lots of funny business, like this amusing bit of haggling over wages: 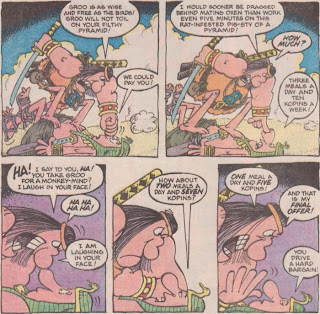 Sergio does get to exhibit his proficiency at comedy based on details of body language and facial expressions, like in this scene in which Groo gets "promoted" to slave driver: 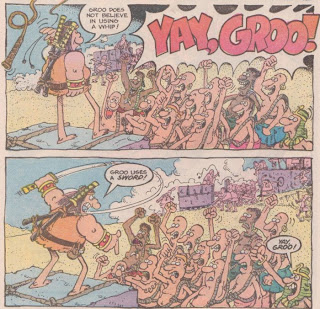 He gets in trouble in other ways too, sinking boats, wrecking construction, and just generally causing havoc, sometimes in response to being addressed in an insulting manner (I love the weird logic of requiring proof that he resembles whatever insult is used against him):

He also gets to perform a pretty quintessential Groo action by being told what not to do and then immediately doing it: 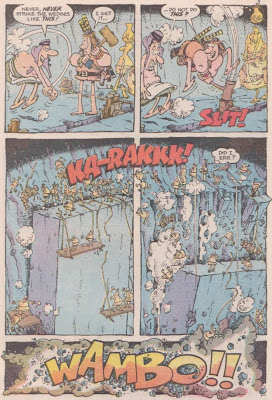 It's a pretty typical issue of the series, one that plops Groo down in a certain setting and just lets him loose to cause chaos. There is a bit of social justice in his actions, as a group of slaves ends up benefiting from his actions (which makes for an amusing reversal of the usual ending, as they are all chasing him to thank him, for a change), but only a slight one; the powerful keep their heel on the slaves' neck, for the most part. Groo is a pretty solitary figure, mostly just keeping to himself and only mindful of his own needs and desires, but it's nice to see him occasionally gain awareness of the plight of those around him, if only for a moment. Unfortunately, this isn't one of those times, but he'll be sure to get more chances in the future.

Nudity watch: the women on this opening page are "PG-13 nude" only because Sergio didn't draw their nipples: 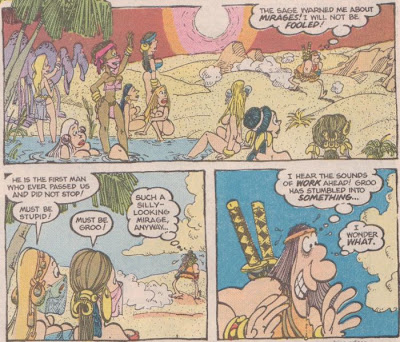 But he did include nipples on one of the barbarian chicks decorating the credits box:

Finding these occasional bits of naughtiness hidden in the artwork of this series was a definite highlight of the comic when I was a teenager. Seems kind of silly now; the fact that the semicircles Sergio drew were (are?) so alluring is a definite comment on the male libido.

This issue's stats:
Recurring characters: None. 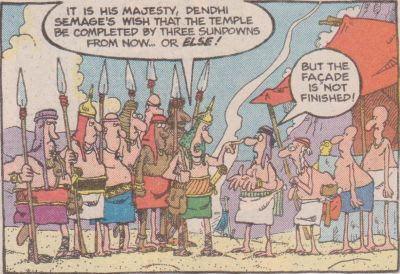 Moral: "When you run from your problem, you make it that much harder for Good Fortune to catch you, as well."
Spanish words: None
Running jokes: Groo sinks a ship and says "Did I err?". He also says that he does not know the definitions of  mendicant and mulch, among other words.
Mark Evanier's job(s): Unequivocator
Letter column jokes: Speaking of hidden messages, Mark reminds readers (unless this is his first confirmation that they exist) that each issue since #4 contains a hidden message, describing where they are in #4 and 5, and stating that the one in #9 is just about impossible to find. He also answers a numbered list of questions, with answers including a joke about Gordon Kent, the series' original colorist, having gone insane, a statement that there will never be a battle between Groo and Conan (yeah, right!), and defining mulch. Letter writer Mark Mokszycki also references Justin Ebert (the guy who didn't like the morals) and mentions a joke about Sage's dog's name from the letter column of issue #12, which might be where that long-running gag came from, until they decided on the obvious name for him (Mulch).
Posted by Unknown at 6:00 PM