The Neverending Fray: Kings have to make the hard decisions, like where to send the idiots 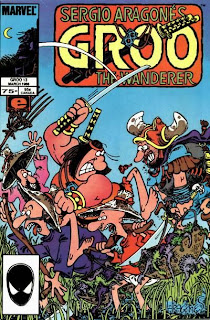 With a title like "The Tale of King Sage", I was hoping for some sort of take on the burdens of power or absolute power corrupting even the wise, but the series wasn't in full-on satire mode by this point, so it's really "just" a story of Groo screwing things up. He comes across a kingdom having a coronation ceremony, and hey, it's the Sage getting crowned king! It turns out to be a continuation of the short story in which he was tasked with healing a dying king (spoiler: he didn't succeed), and he tells Groo about how the people of the kingdom were going to revolt after the king died, but he convinced the queen to take him on as an advisor (he doesn't explain how he got promoted from advisor to king) so he could guide the kingdom to prosperity for all. He and everyone else expect Groo to ruin everything, but even though he entertains the idea of having Groo killed, he can't do it, so he sends Groo with an army to guard the kingdom's northernmost passage. Unfortunately, he also mentions that some land which is being used for grazing should be converted to farmland, which makes Groo think that everyone in the land should quit whatever their job is and become farmers, enforcing that edict wherever he travels. Hilarity (and complete economic meltdown) ensues.

It's a fairly rudimentary story, but a lot of the little moments shine. When Groo wants to get into the castle to see the new king, he has a silly back-and-forth with a guard and then just forces his way in: 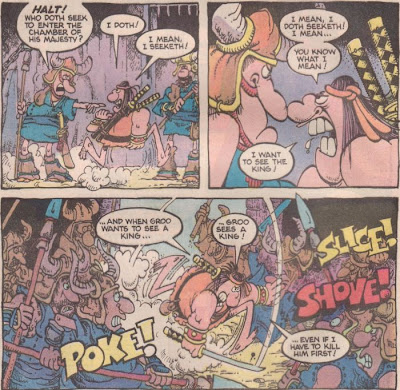 And Sage recognizes his visitor just by description, leading to a great entrance (I especially like the way Groo is choking a guard with his own helmet): 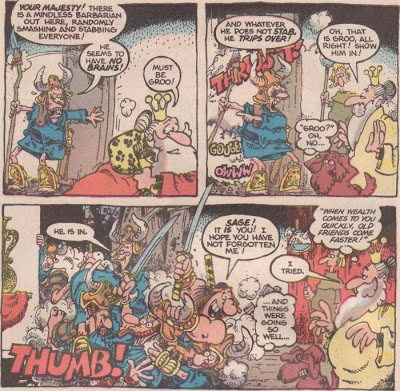 A scene in which Groo's army is recruited is pretty amusing, with a nice bit of meta-humor as a commander recognizes that he is the straight man in a joke: 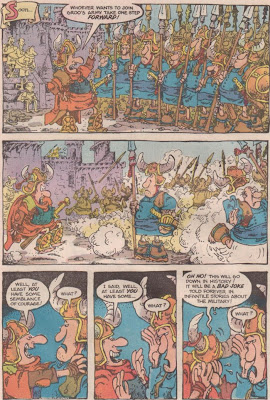 When an army is eventually raised for Groo, it is comprised completely of imbeciles, including a guy who asks "Where are we?" everywhere they travel, which becomes pretty funny just through repetition: 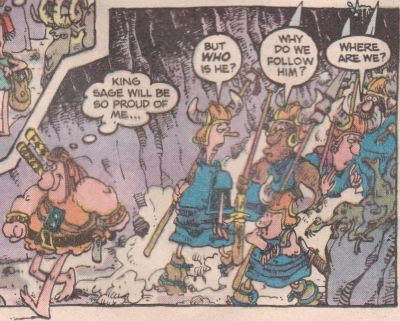 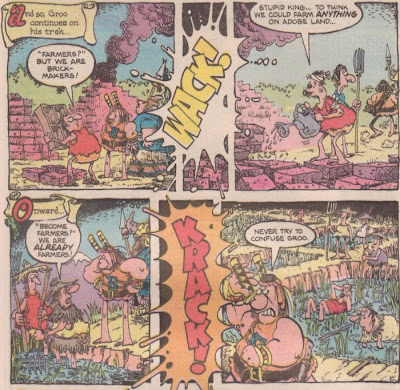 When he gets to his destination, the guy guarding the border has gone insane through lack of human contact, and Sergio's depiction of him is hilarious, complete with filthy, tattered clothes, a spider web, and a bird perched on his helmet: 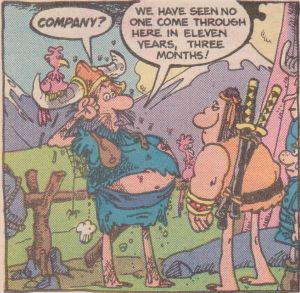 This accumulation of silliness makes for a rather entertaining story, even if it's a predictable one that ends with the expected ending of Groo being chased off in anger. Yes, the series is definitely settling into a groove here, and more hilarity should definitely be expected.

Hidden message(s): Ugh, I'm still too unobservant to find any. UPDATE: As described in issue #27, the message can be found by reading the first word in each of Groo's word balloons in this panel:

Moral: "The man who most obeys the king is the man who gets crowned."
Spanish words: The previous king was named Lapiz, which means "pencil".
Running jokes: Not really a joke, but Groo, of all people, identifies the thing on the end of Sage's staff as a porron. The contents of the liquid inside said porron would become a regular letter column joke. Groo also displays terrible table manners, sinks a ship, says "Did I err?", and confirms he is a fool by saying "I can plainly see that!" Plus, there's a mention of mulch: 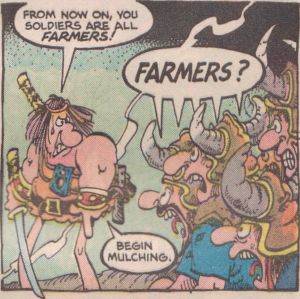 Mark Evanier's job(s): Lackey
Letter column jokes: In response to a letter which asks why there are two Groo #1s, Mark begins the tradition of joking about there being so many number one issues of the series and saying that they should just make every issue #1. By the time the Epic series ended and the Image series started, there would be four of them, and since there have now been several miniseries, there are even more. There's a mention of lots of people asking for a sketch, and Mark defines mulch (in Spanish!) and starts to define it again before being cut off by the end of the letter column.
Posted by Unknown at 6:00 PM