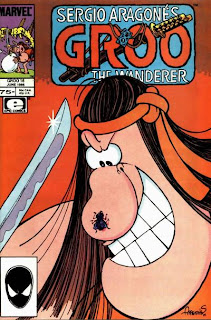 I'm wondering if this sort of story is indicative of why Sergio, Mark, and company started shaking things up after a while, adding regular supporting characters and working social commentary into the story. Or maybe I'm just viewing this as a reader who has experienced another hundred examples of Groo fighting and wrecking stuff, but this story is kind of rote, as amusing as it is. Groo tries to get hired as a guard at a shipyard (for airships, since this is fantasy), but they don't need a guard, so comes up with an idea to make them need a guard. No really, he has an idea: 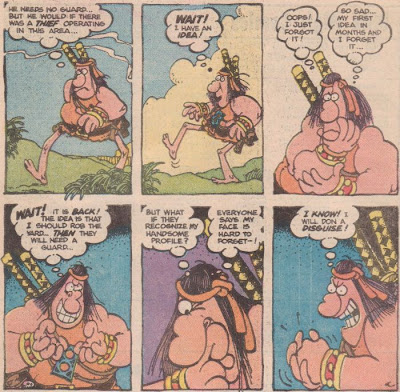 His plan fails, of course, because the shipyard has guard dogs, so he just tries to work there, with predictable results: 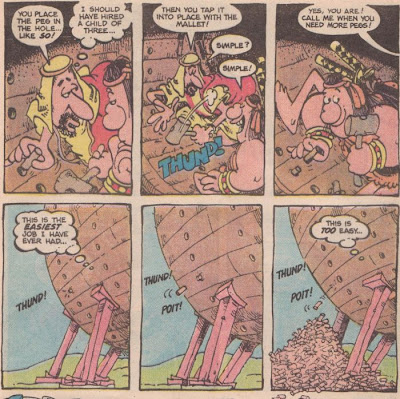 Later, he runs across his "friend" Taranto, fights the army that is chasing Taranto's gang of thugs, and gets fooled into joining them when they steal a ship. Guess which one they take?

This all works well enough, but there's something missing. It might just be the randomness of the plot, in which a character has to show up out of nowhere halfway through to kick things into gear after they had stalled, but I think a lot of this aimlessness will be solved later on, when Groo gains a sidekick to play off of. Rufferto is one of those intangible elements that completes the recipe and brings out its full potential.

There's still plenty to enjoy until we get there though, whether in recurring jokes like a bunch of people all reacting to Groo identically, whether in surprise, fear, or horror:

Or new and chaotic ways to demonstrate Groo's stupidity: 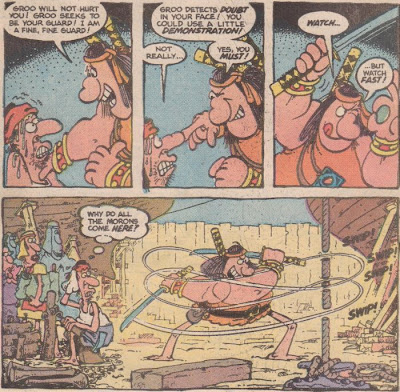 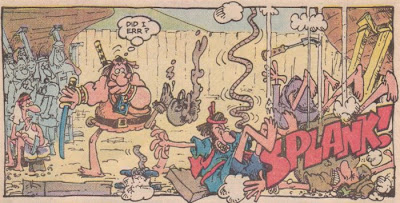 Or even surprises like a shout-out to Prince Valiant (and, in a roundabout way, Jack Kirby): 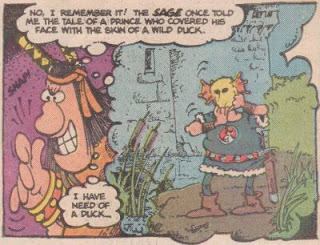 Sure, I'll read it. But it'll be nice to have a spotted dog in the mix.

This issue's stats:
Recurring characters: Taranto. And the Groo creative team can be seen among the shipyard workers on the title page: 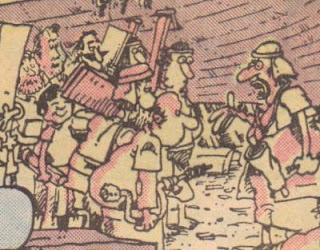 Is this the first appearance of Stan Sakai and Tom Luth in the comic?

Hidden message(s): Does the implication that the Groo Crew were causing trouble at the shipyard before Groo showed up count? UPDATE: More anagrams! Issue #27 points to a "Danghem Seaside" sign whose text can be rearranged to read "hidden message":

Moral: "Trust only in incompetence. You will never be disappointed."
Spanish words: None, except for Mark's job
Running jokes: "Did I err?", "I can plainly see that!"
Mark Evanier's job(s): Banderillero
Letter column jokes: A twelve-year-old reader says that Groo is the only comic he reads because he feels that he "outgrew super-heroes a long time ago", and he asks what a reader is to do when superheroes are all that's published. Mark replies that if he waits two years, he can start writing them. One reader (Todd Neiman) says that if Mark defines mulch one more time, he's going to scream. Mark then defines mulch in reply to another letter, then prints another letter from Todd Neiman that just says "EAAGG-GHHHHHHHH!" In interesting non-joke content, Mark mentions the upcoming graphic novel The Death of Groo (with assurances that Groo survives it) and plugs the Groo lead miniature figures from Dark Horse Miniature Company (which is unaffiliated with Dark Horse Comics).
Posted by Unknown at 6:00 PM