Superman: He really is super, man

Superman: The High-Flying History of America's Most Enduring Hero
By Larry Tye
Published by Random House 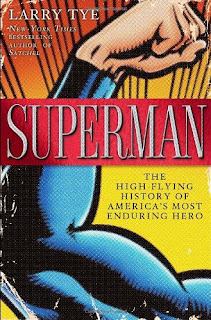 For those of us on the "inside" of comics fandom, who know all the details about all the superheroes, the on- and off-page origin stories, the first appearances and major in-continuity events, the reboots and revamps, the major creative teams, the issue numbers of the big stories, all the ups and downs of decades of comics stories, a book exploring the history of just one character might seem unnecessary. But when it's the original superhero, the one that started it all, and when the behind-the-scenes research is deep enough, it can be an illuminating read, especially if it has an all-encompassing scope that is full of fascinating historical details. That's the case with this book, in which writer Larry Tye manages to compile nearly a century of happenings into one thick prose volume, exploring the genesis of the Man of Steel from the first inklings in the minds of two young men from Cleveland, through his explosion in the blossoming comic book medium, and in nearly every other format conceivable throughout the ensuing decades, including prose, radio, television, film, and theater. It's an extensive overview, one that manages to cohere surprisingly well for such a sprawling tale that features dozens of contributions to the character's legacy, even occasionally pausing to ruminate on the lasting qualities of the character that manage to make him remain recognizable and at least somewhat relevant all these years later.


The best parts of the book are the pure, how-it-all-happened details of how the character began and was nurtured through the ages since. Tye describes the family history and adolescences of Jerry Siegel and Joe Shuster, and examines how they met worked together to create their signature character, who sprang to life on the comics page, seeming like an overnight hit, even though he was actually several years in the making and went through a number of forms before the success of Action Comics #1. Tye also examines the background of publishers Harry Donenfeld and Jack Liebowitz, looking at their underhanded business tactics and exploitation of the creators, but also their genius for taking a hit and making  it bigger and bigger through savvy decisions like keeping the hero from participating directly in World War II (lest he lose his luster once the war was over, like many other heroes who joined the battlefront) and retaining control of his depiction in other media, cementing their position at the top of their field for decades and ensuring that money kept pouring into their pockets. While Tye doesn't exactly take a side in the still-ongoing conflict between the Siegel and Shuster families and the corporate heirs of Donenfeld and Liebowitz, he does keep following the creators throughout the years, noting their various legal battles and attempts to regain ownership of the character (or at least enough money to live on), and making sure to note their struggles to survive while their creative progeny netted millions for others.


And this is just one of the fascinating stories Tye digs up. He also describes the activist mission of producer Bob Maxwell in creating the Superman radio show of the 1940s, which culminated with a battle between the hero and the KKK; the mystery behind the death of George Reeves, who played Superman on TV in the 1950s; the larger-than-life shenanigans of Alex and Ilya Salkind, who produced the first few Superman movies; the goofy stylings of editor Mort Weisinger, who was in charge of the Superman comics in the 1960s; the circumstances that led to the infamous "Death of Superman" story in the 1990s; and much, much more. The purview of the book is as wide-ranging as possible, taking information from sources like Jerry Siegel's unpublished memoir, hundreds of newspaper and magazine articles, and interviews with surviving writers, artists, actors, and family members. Tye discusses Superman's various merchandising and marketing tie-ins, the way he has inspired people throughout the years, and the various permutations his stories have taken in terms of powers, subjects, and scale.


It's in less-concrete subjects like these where Tye stumbles a bit, often devoting more space than necessary to such nebulous ideas as Superman's inspiring spirit (including mentions of people who are obsessed with the character to the point of having Superman-themed weddings), and an entire chapter which discusses Superman and spirituality. Even if it didn't interrupt the ongoing history of Superman's early years, the religious discussion is a bit of a reach anyway, with Tye trying to read aspects of Judaism into the character's mythology due to the fact the Siegel and Shuster were (secular) Jews, then discussing how various religions (and the non-religious) claim him as a symbol. It's a bit tiresome, and based mostly on speculation, as is the even more ridiculous notion floated elsewhere that Superman is some sort of living spirit that gets channeled by his various creators, rather than the product of specific people's imagination, a lucky combination of ideas that hit at just the right time to strike a chord with the populace and grow into something larger than life. Given the amount of space he dedicates to the travails of Superman's creators, Tye doesn't seem to subscribe to this idea, but any discussion of it at all is an insult to creative types anywhere.


On a more superficial front, Tye has some quirks to his writing style that take some getting used to, including referring to people by their first name (there are many mentions of Jerry, Joe, Jack, and Harry in the discussion of Superman's early history, for example) and starting chapters off with sentences like "His mission was to scrape off the barnacles," and then taking a paragraph or more to get around to revealing who he is talking about. He'll discuss events out of order at times (John Byrne's revamp of Superman in the 1980s is described before going back to discuss Crisis on Infinite Earths and the stories that led to it), and he repeatedly follows descriptions of money-making merchandise or other tie-ins with the phrase "Ka-ching". But these are just stylistic elements to get used to, and are far from dealbreakers.

No, the value of the information contained in the book is obvious for those interested in the stories behind the comics they enjoy, and the amount of research work that has gone into putting it all together is impressive. Tye apparently found a subject that fascinated him, and the effort he put into teasing out the relevant details in a story spanning so much time and so many players makes for a reward to all who read the story. There's a lot to take in in the volume, but if you've got a fraction of Tye's patience, there's plenty to entertain and instruct, both on the comics page or movie screen and in the scaffolding that built the whole enterprise itself.
Posted by Unknown at 12:00 PM