The Neverending Fray: Beware the fish 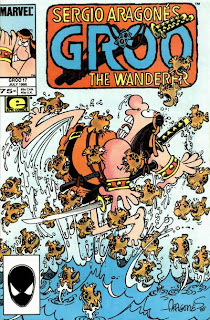 As much fun as it is to see Groo tumble into people's lives and ruin everything, sometimes you feel kind of sorry for them, especially if they don't seem completely deserving of the utter destruction that inevitably follows in his path. That's kind of the case in this issue, when Groo makes his way to an isolated village and impresses the leaders with a display of swordsmanship: 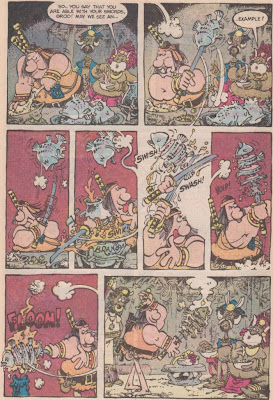 They foolishly make him the commander of their army, in order to destroy their hated neighbors, and, by attacking the first people he comes across, he quickly manages to alienate them from their allies and also make enemies of the third party meant to lead some peace talks. And then he manages to destroy their means of defense (a piranha-filled lake), thoroughly dismantling their means of survival amongst the people of their apparently animosity-filled land.

It's pretty harsh, even if it was all initiated by an attempt to use Groo to wipe out an enemy. This might be another example of a plot that could have been made better by the addition of a (spotted, canine) audience surrogate, someone to comment on the action, remind us of why the people deserve what they get, and cheer Groo on whenever he screws up. We'll get there eventually.

As always, there is still plenty to enjoy, with this issue offering some excellent physical comedy, the main highlight being Groo's attempt to use stilts to make his way across the piranha-infested waters: 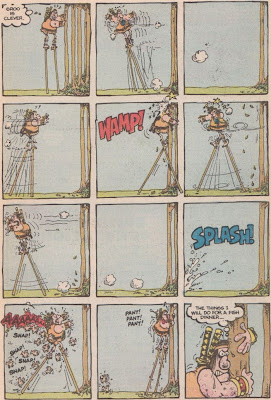 The multiple scenes of all those tiny fish swarming over the screaming barbarian are pretty funny too, and I like the comparison between some pigs devouring their slop and Groo diving into a meal: 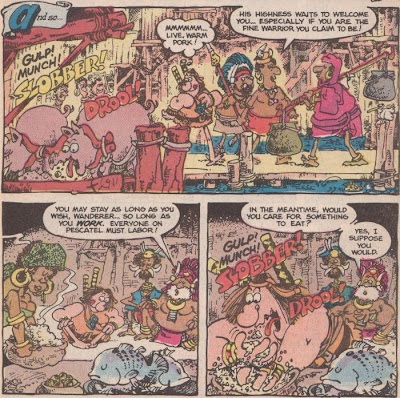 Also, for those interested in that sort of thing, I think this is the first time we get to see Groo's ass: 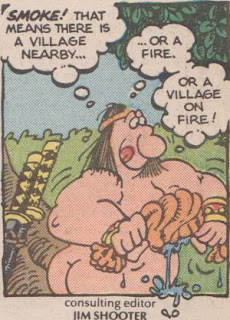 I'm not sure if that's a highlight or not.

Hidden message(s): Have I mentioned that I'm bad at finding these? UPDATE: Issue #27 reveals that the title page poem forms an acrostic, with the first letter of each line, put in order, reading "the hidden message": 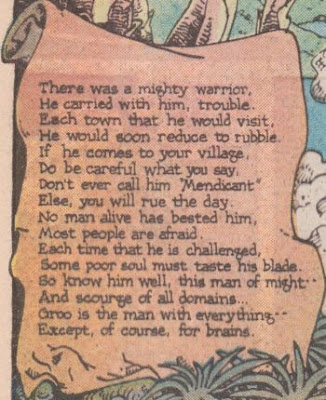 Moral: "The fish most likely to be caught is the one with the biggest mouth."
Spanish words: The main village is Pescatel, which the title informs us means "hatchery". One of the tribes Groo encounters is called the Trabahos, which is a misspelling of "trabajo", or work. And there's also Mark's job (see below).
Running jokes: "Did I err?", mulch, the title page poem advises never to call Groo a mendicant.
Mark Evanier's job(s): Traductor (Spanish for translator)
Letter column jokes: Mark answers a couple numbered lists of questions, with the best joke probably being about why Sergio draws so many people with hats hooked under their noses: "If you saw Sergio's hat, you'd understand. Come to think of it, if you saw Sergio's nose, you'd understand." He also states that the pouch on Groo's belt contains "whatever we need to get him out of a plot problem", makes a joke about getting paid little to nothing, references the government paying farmers not to farm (I think that was a thing people joked about a lot back in the 80s), and states that Groo won't cross over with Ambush Bug because "we'd rather cross over with a humor comic." A reader pulls a Jeopardy and asks "What is a process of inbred fertilization...", prompting Mark to answer that it is called "mulching". And it's not a joke, but he gives a pretty detailed explanation of why some issues of the comic have a barcode on the front and some have a picture of Spider-Man.
Posted by Unknown at 6:00 PM