This is the second post in a series looking at notable stories to be found within The Graphic Canon, volume 1.

The Book of Esther
By J.T. Waldman

This excerpt from J.T. Waldman's Megillat Esther is extraordinary, a demonstration of a beautiful and fascinating way to adapt the Old Testament into comics form. Each page is filled with gorgeous artwork, including lush figurework and detailed settings, but also interpretive design elements that incorporate the original Hebrew text. It's an innovative and exciting way to evoke the full sensory experience of the story, with my favorite page taking a sensory overload approach with dozens of tiny panels depicting the Persian king who initiates the plot having a massive party, with the page's text fitting in the gaps in between the images, as if the party has been so long-lasting and overwhelming that the participants can only barely discern the amount of time that has actually elapsed: 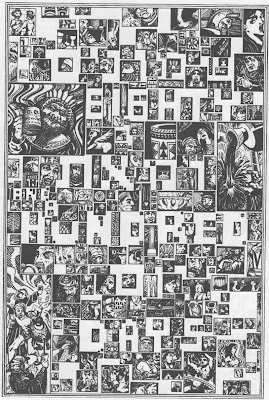 The portion of the book included here only contains the very beginning of the story, but the presentation is so incredible that I'll definitely be seeking out the entire book when I get the chance.
-----

The Mahabharata is evidently a staggeringly long and complex epic, which could make for a great, if cripplingly massive comics adaptation, so what Matt Wiegle does here, in a comic original to this volume, is single out one teeny tiny sliver of the whole story and enact it on the page in a lovely manner. It's a simple plot, about an evil member of one of two warring families who builds a palace for some members of the rival family to say in when visiting, planning to burn it down and kill them when they arrive. Wiegle's version plays out across only four pages, but they are a marvel of design, with long, skinny panels extending across a shared background, acting as slices of time glimpsed against a background, which starts out on the first page as empty landscape, then becomes a massive palace, with the characters moving around within their little portions of the story: 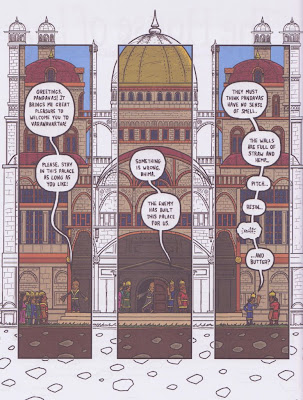 It's a great metaphor for the entire work, in which many tiny, nearly indistinguishable characters move throughout a larger whole, standing against the massive backdrop of the entire epic. It's a wonderful little glimpse of the hugely expansive whole, enough to whet the appetite for more.
Posted by Unknown at 11:07 PM

Email ThisBlogThis!Share to TwitterShare to FacebookShare to Pinterest
Labels: comics, The Graphic Canon