UPDATED! The Neverending Fray: Groo never gets any credit 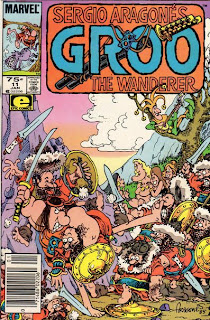 This issue features a guest turn fro the Minstrel, who is now the official bard of Arcadio (in what appears to be his second appearance, after the previous issue), another wandering adventurer in the Conan the Barbarian mold, although he never seems to do anything, instead coasting on his handsomeness and taking the credit for everything Groo does. He calls Groo "lackey" and holds himself in high esteem, and he always manages to come out on top, with women hanging all over him and everyone rewarding him because he fits their idea of a hero, rather than because he actually does anything. There's some good genre satire in that idea, but he usually annoys me because his pomposity could use some deflating, yet by his nature he has to come out on top, with Groo humiliated and reviled as usual. In this case, Arcadio has successfully obtained a magic goblet (through Groo's efforts), but he finds that it is worthless without a certain elixir, so the team heads off on another quest, which Groo manages to complete by accident, then returns to claim their reward. The big gag of the issue is that the people of the kingdom offering the reward are hideously ugly (Sergio gives them a warty, boil-covered, toothless, look reminiscent of Lena Hyena, and Mark drives the homage home by naming the princess Alaja Wolverton): 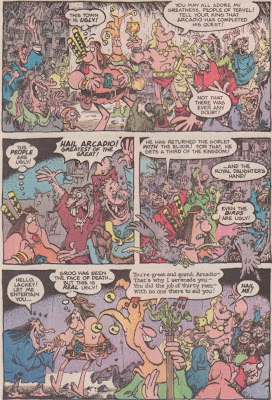 This causes Arcadio to give the credit and reward to Groo, who flees in horror, missing the reveal that the kingdom is actually under a spell, and the goblet and elixir turn them into their true, beautiful selves, even fixing the issue of rancid cheese dip. Hilarious? I dunno, the lack of internal consistency bothers me; why did the people offer Groo cheese dip before their transformation when they knew it would be nausea-inducing? And did Arcadio know the reason behind the ugliness, or did he just luck out? He did only accept the princess' marriage proposal after the curse was lifted, so signs point to him taking advantage of the situation, but his general obliviousness and unchanging expression make it hard to tell, and while the reversal of the situation to make life terrible for Groo is amusing, it seems more unfair and cruel than usual. It's funny when Groo fails, but the series is at its funniest when everyone around him also suffers, especially those who try to take advantage of him. Arcadio does the opposite, taking credit for everything Groo does right and managing to benefit at little cost to himself. It's kind of infuriating.

Maybe it's my antipathy to Arcadio, but I like Groo's other plot in the issue, in which he keeps wandering off to defend a village from a horde of invading dwarves, condemning them to return assaults once he leaves and just barely missing this awesome-looking giant lizard: 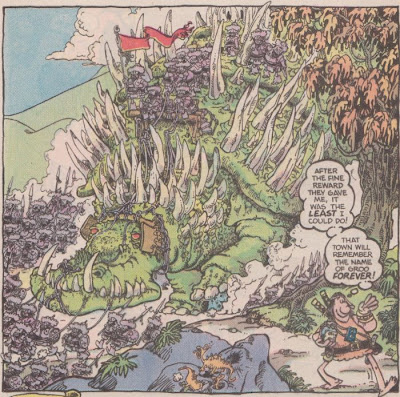 If only he had just spent the issue fighting that thing! He also refuses to leave the village until he gets a reward,  and, oddly, is interested in its women: 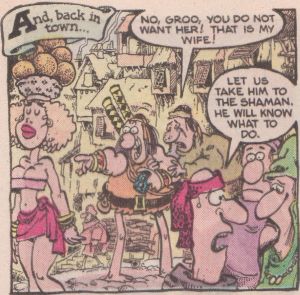 On that tack, there's also a touch of PG-13 nudity in this scene, with one of the group of nubile wenches fawning all over Arcadio apparently being topless (there's also something strange going on with her leg): 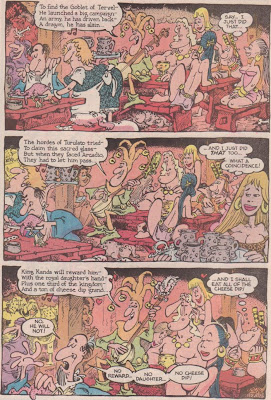 For some other nice Sergio details, here is a bit of the splash page, in which one of the dwarves has the rim of his Mongolian-style furred helmet pulled down across his face, and other one is emitting one of those signature skull word balloons that signifies death, but the skull has a bushy beard and moustache: This might not be my favorite issue of the series, but I can always find plenty to enjoy anyway.

This issue's stats:
Recurring characters: The Minstrel and Arcadio

Hidden message(s): I still didn't notice any! There's even a perfect spot to hide away some "This is the hidden message" text on the labels of some shelves full of bottles of dusty old potions. As revealed in issue #21, the letter page has a list of names of people who wrote complimentary things, but Mark supposedly didn't have room to print their full letters. The real reason for printing their names is that taking the first letter of each one reads "This is the hidden message." Sneaky!
Moral: "Beauty may be a curse...but not as great a curse as stupidity."
Spanish words: The attacking dwarves are called the Gorditos ("little fat ones"), and their giant lizard is the Gordosa, which I think is some sort of Spanish play on words. The Minstrel mentions the hordes of Turulato, which means "nincompoop".  Merluza (the name of the guy who made the elixir which Groo and Arcadio must fetch) is the Spanish word for hake, a kind of fish. Alaja appears to be a prefix meaning "sub-", so maybe naming the ugly princess Alaja Wolverton is a humble statement of Sergio's inferiority to Basil Wolverton's when it comes to depicting ugliness.
Running jokes: I don't know if this is the first time it has shown up, but there's an example of a classic Groo joke in this issue, in which somebody describes something and says "...as any fool can plainly see!" with Groo responding "I can see that!" That one always makes me smile. Also, there's a lot of talk of cheese dip.
Mark Evanier's job(s): Lyrist
Letter column jokes: Mark says that he's trying to convince Sergio to expand the letter column to fill the whole book, and he can draw the comics in the margins, like he does in MAD. He also defines mulch and thanks everybody who wrote in, "even the one or two of you who have written in to tell us that this book stinks because it doesn't have any mutants in it." And one letter makes me laugh because the writer notes three appearances of Groo in Sergio Aragones' More Mad Marginals, beating me to my shtick by 25 years.
Posted by Unknown at 6:00 PM