The Neverending Fray: Back to an earlier issue for some magic and violence 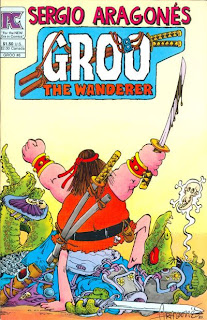 Looking at the front cover of this issue, it seems a bit bland, and weird to pose Groo with his back to the reader, but turn it over, and it becomes an excellent gimmick and a pretty funny joke: 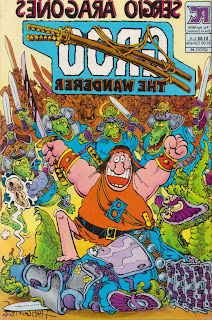 That's pretty great, and as usual with Sergio, the details are what sell it, especially all the reversed text, including the signature, which is now on the other side of the dead lizard's sword, and Groo's swords being visible from this side of the logo. I also like the way the readers are placed in the position of the bloodthirsty lizard warriors, which is probably some commentary that is overly deep and not intended in the slightest.

As for the issue inside, it's another good romp, with Groo getting stuck in the middle of a battle between wizards, who are fighting over a kidnapped prince. Groo starts out on the side of the kidnappers (accidentally, or at least through being easily misled), but he quickly switches when he learns that the reward for the prince's return is one third of the kingdom and the hand of the princess (oddly, he's mostly interested in the "gorgeous" princess, an indication of  his still-unformed characterization), and there are a bunch of good gags about his stupidity (the way the king cheats him out of his reward is pretty funny) and his violent nature (as when he slaughters a bunch of guys who he thinks are trying to steal his reward). Lots of great details too, both in the writing (I like the insults that one of the wizards constantly directs at Groo: "You mongrel's tonsils," "You horse-bladder," "You pimple on the back of a pig," etc.) and the art. The final gag of some mating elephants (conjured by one of the wizards) is hilarious, and I always like the various helmet decorations that Sergio likes to put on his warriors, like these guys with birds on their heads:

The "adultness" of the series was still in effect here, starting with the blood dripping from Groo's sword on the cover, and continuing with the high body count of the issue, especially this bit in which Groo (or actually a magical double) beheads one of the wizards: 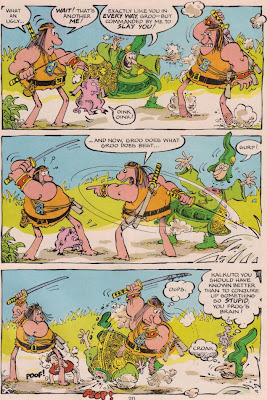 There's also a little bit of PG-13 nudity (and an example of Groo's later-quashed sexual attractions): 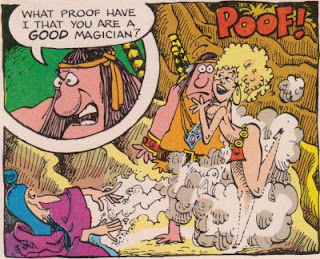 And, in a more puerile direction, this panel, in which a soldier pisses on the tree against which Groo is sleeping: 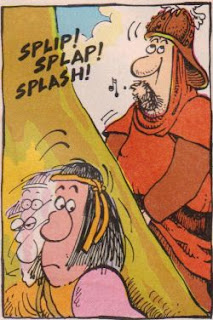 The backup, which is nominally a Sage story, makes for an interesting example of the way the creative team liked to occasionally break the fourth wall, with a letter from Mark to Sergio "pinned" to the page: 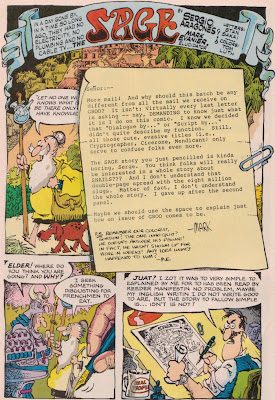 And then interrupting the story so the two of them can explain how the comic is created, making sure to describe exactly what Mark Evanier does, since that seems to be a point of contention among readers, and already something of a running joke, possibly springing from the goofy jobs which he is listed as having in each issue. The story ends with a silly gag that "reveals" that Sergio doesn't just draw things from his imagination, he hires models to dress up as all the characters (including costumes for things like monsters and lizard men), rents animals like elephants, and builds and sinks ships, all for authenticity. Not a bad showbiz gag.
-----

This issue's stats:
Recurring characters: Grativo the wizard showed up again later, although he was a pretty minor member of the supporting cast. The Sage gets two panels before his story is interrupted. Looks like I was wrong about the Eclipse special being Mark's first appearance, since he and Sergio starred in the backup story here. And while they technically aren't appearances of the actual characters, people dressed as Ahax and Chakaal show up on the last page of that story.

Hidden message(s): As I've recently discovered, they weren't doing them at this point.
Moral: "The worst curses in the world are boils, pestilence, and having partners (not necessarily in that order)."
Running jokes: Cheese dip. Canter's Deli makes an appearance in the backup story, although I think this was before it had been established as a running letter column joke. And Sergio's bad grasp of English is on display in that story, with Mark translating what he is trying to say for the readers.
Mark Evanier's job(s): Verbalizer, Elucidator
Letter column jokes: Just about every letter asks what Mark does, seemingly prompting the "behind the scenes" story.
-----

Thanks to reader Nicholas Doyle for sending me this issue, simply out of the kindness of his heart.
Posted by Unknown at 6:00 PM