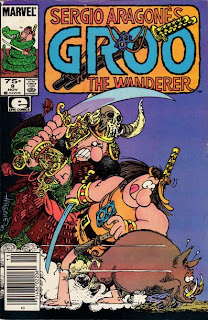 Groo teams up with the Sage in this issue, and even manages to get one over on him, sort of. It's a goofy little story parodying nonsensical religious beliefs (along with the easily-fomented conflicts they can lead to), in which the dumb/wise pair are looking for food, but are stymied when one village won't let them eat their sacred apples, and the next won't allow butchering of their sacred pigs. Sage stops Groo from just taking what he wants, but outlines (in theoretical terms, which he should know better to use with Groo) a way to get both pigs and apples by setting the two villages against each other and reaping the spoils of the religious war. Groo decides to follow this plan, of course, leading to one of the more chaotically violent moments of the series so far, as the starving villages unleash their wrath against each other: 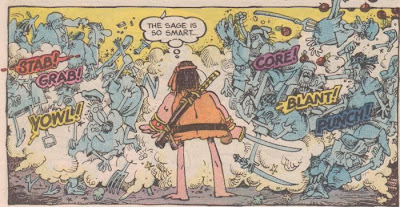 Ha ha, people slaughtering each other over their beliefs is hilarious! Everybody gets their comeuppance though, when it turns out that the beliefs were rooted in ancestral taboos which were there for a reason, that both the pigs and apples were poisonous (?), causing the people who ate them to get deathly sick. That includes the Sage himself, who is telling this story to some people over dinner, eating food which was purchased from Groo. I don't normally like to "spoil" the punchlines of these comics, but the last panel is pretty hilarious, with Sergio throwing in lots of comedy based on physical torment, including one guy who apparently about to experience explosive diarrhea: 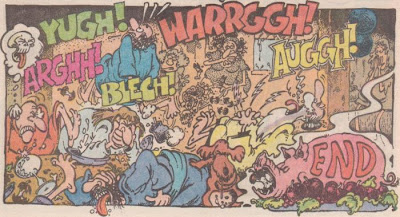 That's just one example of the excellent comedy in this issue, which sees the creative team really settling into a groove, grasping Groo's character and how he interacts with those around him. There's a great example of this early on, when Sage saves Groo from a battle (one that he doesn't want to be saved from, saying "Can you not see I am enjoying myself?"): 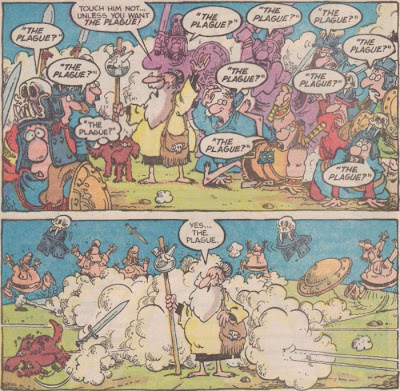 I always like the "everybody repeats the same response to a statement" gag, and the huge cloud of dust as everyone (including the Sage's dog and Groo) flees is pretty great too. There's also a great exchange on the next page that uses Groo's stupid logic really well: 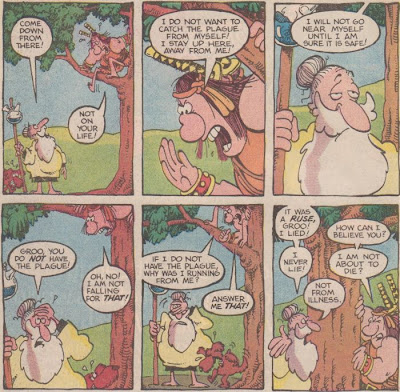 There's also a nice moment in which Groo forgets the details of his plan halfway through:

I love the faces he makes when he is trying to remember something, or figure out a "difficult" concept. And I always love scenes of him fighting, like this bit of the title page, in which his foot is sinking into a guy's chest and he's cutting the top of another guy's helmet off: 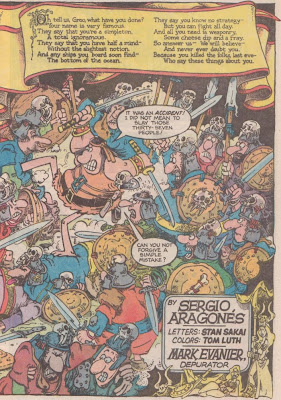 Yes, this might be the moment in which Groo's characterization fully settled into its "correct" form. Of course, he's still doing his wanderings alone at this point (with associates occasionally popping in for an issue or so), but that won't be rectified for another twenty issues.

One other thing worth commenting on is the variable level of anthropomorphism that shows up in this series. Animals can vary from unthinking beasts, to ones with expressions reacting to the goings-on around them, to using thought balloons to comment on the action, and in this issue, the "sacred" pigs even converse with each other and make gestures: 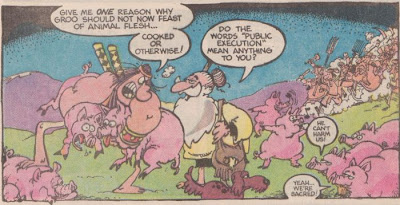 It's an odd conceit, and an interesting bit of flavor for the series. The most obvious use of this trope will occur when Rufferto joins Groo on his travels, since he regularly "talks" via thought balloons, but it's already firmly in place here, and it's interesting to see how it is used to add extra jokes to the background of scenes. There's always more stuff to notice in Sergio Aragones comics, isn't there?

Hidden message(s): I still didn't find one. I don't seem to be very good at this. As revealed in issue #21, this one is ridiculous. On the ninth page of the story, taking the first letter of every word of dialogue reveals the message, "This is the hidden message. Mark and Sharman went to see "Noises Off" at the Music Center and ate at the Pacific Dining Car." I guess he never expected anyone to find this one, since it's just some random detail that Mark threw in about his life. I like the eventual format that the hidden messages settled on better.
Moral: None.
Spanish words: The villages of Marchuquera and Beniopa are named after locations in Spain.
Running jokes: Cheese dip, mendicant
Mark Evanier's job(s): Depurator (meaning: one who cleanses or purifies)
Letter column jokes: Even in this early issue, the tone of the letter column has become established. On just one page, Mark defines "mulch" three times (a joke which must have begun in one of the issues I missed, but which will persist for years to come), answers two letters composed of numbered lists of questions or requests (including one which says they should put Groo in Secret Wars II), refers to one letter in the answers to others, and plugs Cassell's Hamburgers (since Canter's Deli wouldn't give them a free meal). There's also a letter which not only jokes about not knowing what Mark does but also not knowing who he is.
Posted by Unknown at 6:00 PM