The Neverending Fray: It's a comic, so you gotta establish backstory 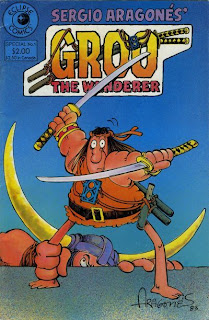 After Pacific Comics went out of business, the Groo crew wanted to keep their comic on the stands so people didn't forget about it before their new ongoing series started appearing through Epic Comics, Marvel's creator-owned line, so they put out this special though Eclipse. Maybe some of this material was originally intended to be published through Pacific (but obviously not all of it, since the issue includes a previously-unpublished story from 1977, and also reprints Groo's first appearance from Destroyer Duck #1), but it seems like the sort of thing intended for a "special", being a flashback story detailing how Groo obtained his distinctive swords. It's framed as a story that the Sage, Groo's wise friend and occasional mentor, tells to some guys over dinner, detailing how Groo was recruited as a look-a-like for a cowardly emperor to lead his army, but he screwed it up, of course. It's a pretty simple story, but notable for a few aspects. For one, the level of violence has been lowered; while Groo still slices guys up on the battlefield, we don't see it in such graphic detail, and the mayhem becomes more of a comic conceit through the use of funny sound effects: 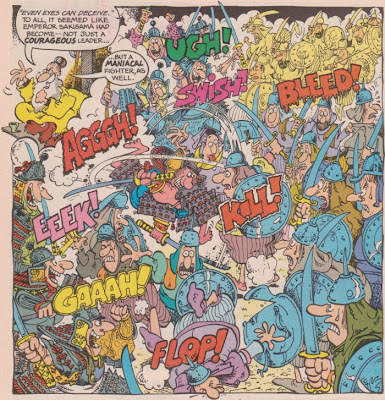 And even when he explicitly murders a bunch of guys (while training with the swords that he is to carry when impersonating the emperor), it's implied more than shown: 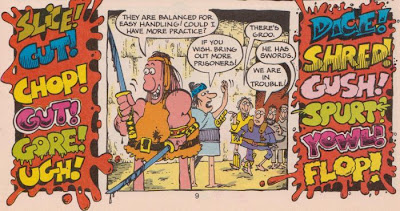 This also seems like a point when a Japanese influence (some of which might have been inspired by the work of Stan Sakai, who letters all the Groo comics but is more well known for his rabbit samurai comic Usagi Yojimbo) becomes overt in Sergio's art. The armies in the story wear samurai armor and carry what seem to be samurai swords, and the leaders have Japanese-sounding names like Sakisama and Fuchikaka (although the latter is probably also something of a Spanish-language joke). There's even a neat illustration of the legendary backstory behind the swords Groo is given when pretending to be the emperor (and which he ends up keeping after being run off at the end of the story): 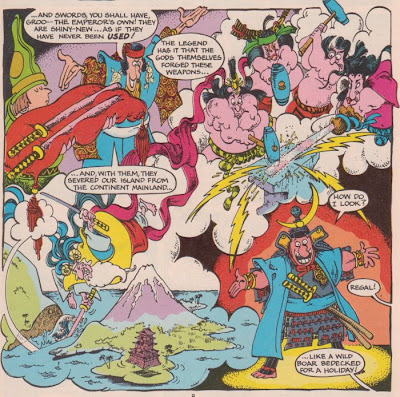 That's definitely Japanese, from the markings on the gods' faces, to the pagoda, to what looks to be Mount Fuji. I love the expressiveness of the gods there, and Sergio even sneaks in an homage to the famous Hokusai wave painting.

It's also interesting to see a story based around Groo's military prowess. Later, it becomes established that Groo is useless as part of an army, because when he joins a fray, he randomly slaughters everyone in sight, causing as much damage to his allies as to the enemy. But here, when impersonating a leader, he leads his men to several victories, which doesn't seem right. That's too much success for Groo; he's doomed to screw up anything he'll attempt, and especially any plans that others base around him. Which he certainly does, but it takes much longer than expected.

As for examples of great Sergio humor, I love this panel from early on in the story, when Groo accidentally calls for his army, which is currently winning a battle, to retreat:

Look at how many funny variations on one word Sergio manages to work into that panel, especially the guys who are happy to have their lives spared at the last moment and the man with all sorts of sharp implements protruding from his torso who is unimpressed with the timing of the announcement.

In the second part of the issue, Mark and Sergio introduce an earlier Groo story (they also show up halfway through to note that the story was never finished and then come up with an ending), which makes for an interesting contrast, the art being even more off-model than the Pacific issues. This one sees Groo wander into a village that was abandoned when the people fled from attackers, then get recruited to find out what happened to all the women who were kidnapped from the town. Interestingly, he seems uninterested in the woman who tries to use her feminine wiles to get him to defend her, which was different than we saw in the first Pacific issue:

He also comes up with a surprisingly sophisticated plan to rescue the kidnapped women, one which seems entirely too smart for Groo, but that's probably due to the character not yet being solidified. 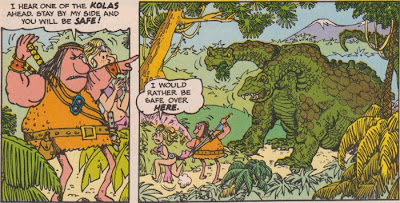 And the bad guys, who turn out to be a bunch of talking, clothes-wearing monkeys, are a hoot: 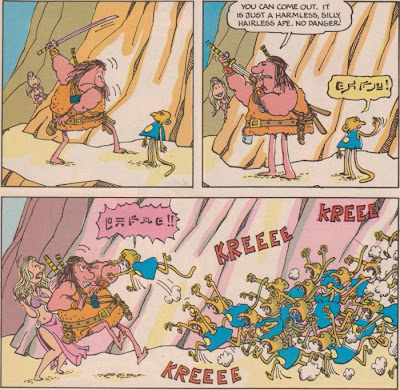 On a violence note (since that seems to be an obsession of mine), Groo totally decapitates a guy: 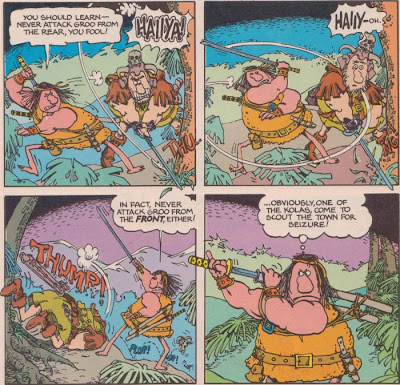 The final story, which is a reprint of the four-page story in which Groo first appeared, is a pretty simple, mostly-wordless affair in which Groo attempts to rescue a fair maiden from a four-armed lizard warrior, and it's just a straightforward fight scene with a punch line, but it's notable for the clear action choreography, which is much more detailed than later Groo comics would be: 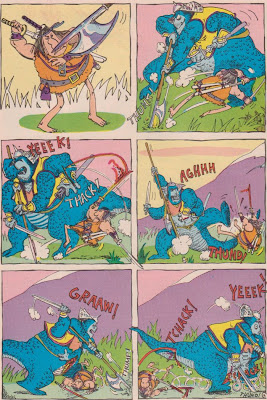 Sergio could probably do a cool, serious action comic if he wanted to, but I'm glad he settled on depicting fighting as captured moments of mayhem, which is a much better fit for the comedy and detail-packed scenery that he does so well.

Finally, this issue includes four pages of images of characters which can be cut out and used to create your own Groo scenes, like this one that I created:

If you want to make your own, I've scanned the pages in and made them available for download here. If you do create your own scenes, please take pictures and send them to me! That would be awesome.

Next: "The Song of Groo"

This issue's stats:
Recurring characters: The Sage, as mentioned, and Taranto, who gets his helmet horn chopped off by Groo, since flashbacks always have to show why characters ended up the way they are: 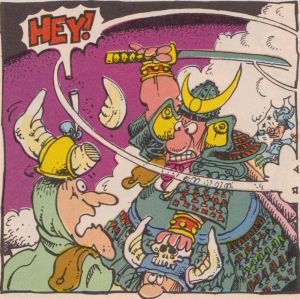 Also, come to think of it, Sergio and Mark themselves could be considered as recurring characters too, although they only appear in framing sequences. This might be the first appearance of Mark Evanier in a Groo comic, although Sergio gives him a sharper nose than he would later: 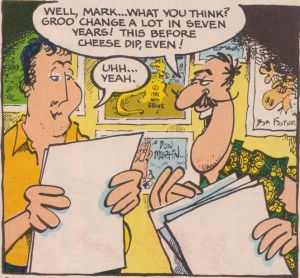 Hidden message(s): Still nothin'.
Running jokes: This is the first time I've seen Groo's "Did I err?" catchphrase, but it's possible it debuted in one of the Pacific issues I don't have. Groo also gets called a mendicant and expresses a love for cheese dip, of course. And Sergio's broken English is really played up in the scenes with him and Mark, another gag that would become a staple of the series.
Mark Evanier's job(s): Linguistitian, Scrivener
Letter column jokes: No letter column, although there is a text piece on the inside front cover in which Evanier kicks off the joke of plugging other comics that he wrote. And in a scene inside Sergio's studio, a letter can be seen with the text "Please send me a drawing" visible, so that's kind of a letter column joke without the letter column.
Posted by Unknown at 6:00 PM