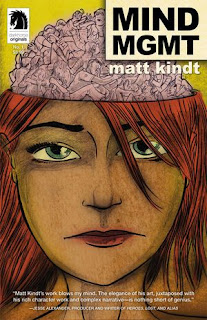 Matt Kindt has a talent for weaving fascinating, complex stories and giving them a hook that grabs the reader right away, even if they're still getting an idea of what exactly is going on. At the end of this issue, that's where I am, not sure of the complete stakes or scope of the story here, but impressed by the ideas and very interested to see what Kindt has in store. This issue has violence, weird dreams, a decades-spanning history of some sort of secret mind control agency, an ongoing plot that's causing random amnesia, and supernatural bad guys chasing the protagonists across the globe. Kindt comes up with a full package here, including strips that detail backstory on the inside covers, secret codes hidden throughout the issue (or so he claims; I'm too dumb to figure any of them out), and fake ads on the back cover. It's exciting work, kind of a last gasp of the dying single-issue comics format, and given Kindt's past work (especially the excellent Super Spy), I'm highly anticipating what's coming up in the future. I hope he hasn't mind controlled me to say that...
----- 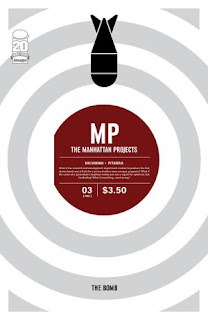 High concept stories can get tiresome pretty quickly, especially when there's little to them beyond whatever elements are combined in the title. Why bother with something like Cowboys vs. Aliens or Abraham Lincoln, Vampire Hunter (or any of the "it's like this one thing you like, with another thing added!" concepts currently littering pop culture), when whatever imagery the jammed-together concepts bring to mind are likely to be as entertaining as the actual result. Jonathan Hickman and Nick Pitarra's The Manhattan Projects seems like it might suffer from such conceptual wankery ("It's the scientists who created the atomic bomb, but they're, like, mad scientists!"), but there's more going on than just fooling around with recognizable characters and concepts; instead, Hickman is weaving a fascinatingly insane alternate history, in which the Bomb is just one of the products of the science-based and supernatural research the great minds are developing, and the members of the team themselves are all somewhat nuts. Robert Oppenheimer, having been replaced by his murderous, schizophrenic twin, is a standout, but the aloof, smarter-than-thou Richard Feynman is good too, as is the bizarrely-transformed Harry Daghlian, and the treatment of Albert Einstein as a somewhat dangerous shut-in who sits in sealed quarters contemplating an (alien?) artifact in between dispensing cryptic bits of wisdom is one that should be fun to see explored.

Hickman keeps a definite sense of humor about all the weirdness going on, and he throws in at least one good setpiece per issue, with this third installment seeing a crazy Masonic ritual involving Harry Truman and some high-tech shenanigans based around FDR's corpse, along with a finale that delivers on the expectations of the title. Nick Pitarra, who recently worked with Hickman on the time-travel comic The Red Wing, is a great choice for the art, bringing a detailed, Geof Darrow-esque sensibility while including plenty of expression to the characters' faces and coming up with some truly memorable images.

Hickman is obviously having lots of fun here, playing around with recognizable figures and events and adding all sorts of fantastical wackiness on top of them, creating a wonderfully strange world that could stand to be explored for a long time to come, and allowing for decades worth of stories and ideas. I expect it will be tons of fun to see how it plays out.
-----

The Secret History of D.B. Cooper #3
By Brian Churilla
Published by Oni Press 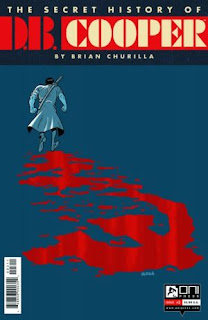 Is this another high-concept story? Probably not, unless that concept is "famous hijacker meets psychic warfare". It's more of an expansion on a notorious unsolved mystery, filling in a possible history of a character who is known for disappearing without a trace. Amusingly, that history involves work for the CIA as an assassin who kills by entering an astral plane and battling monsters while accompanied by a talking teddy bear. Hey, why not? If nothing else, that setup provides Brian Churilla a multitude of opportunities to depict all sorts of weird beasties like a huge flying worm, a giant flayed creature with an eyeball protruding from its gaping maw, and an obese, ponderous-breasted figure that moves via inverted locomotion. That monster design is the definite highlight of the series, making it worth reading just to see what sort of crazy shit Churilla will come up with next. The Commie-fighting intrigue is a bonus, and given that we have at least a good idea where it's all going, watching the way Churilla gets there will be quite enjoyable, methinks.
Posted by Unknown at 6:00 PM