Pamphleteering: I guess I'll read Batman if I have to, and I might even enjoy it 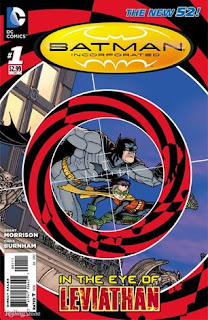 We may have reached a point of diminishing returns on these Grant Morrison Batman comics, but at least they're enjoyable to read, especially if they're the extent of one's modern superhero comics consumption. It might be the years-long, often-delayed nature of the storytelling, or the way they pale in comparison to Morrison's better work of the past, but eventually one loses interest in the long-term plot going on around Batman's baby-mama and the various hangers-on who he's recruited to accomplish whatever world-saving plan he has that might eventually be revealed. The opening page, a one-month flash-forward in which Bruce Wayne mopes in the rain and confesses to Alfred that "it's over" before being surrounded by Gotham City police, doesn't fill one with hope, and the cliffhanger in which a major character is supposedly killed isn't exactly suspenseful, since even if he is actually dead (which is doubtful), that doesn't really mean anything in superhero comics anyway.

But! In between those bookends is a rip-roaring bit of adventure, full of wild violence and crazy action delivered in what would be considered prime Frank Quitely style (if Quitely could manage to actually finish drawing a comic these days) by Chris Burnham, who is fast becoming one of the best artists in superhero comics, as well as Morrison's most reliable collaborator. Batman and Robin chase a goat-headed crook through a slaughterhouse and face off against a rocket-rifle-wielding assassin, and Burnham fills the pages with innovative storytelling, borrowing ideas from Quitely like inset panels showing close-ups of the characters' faces or sound effects embedded in the art, then adding his own distinctive flair and coming up with interesting new techniques, like this page in which the panels become murals painted on the sides of the buildings Batman and Robin are swinging over: 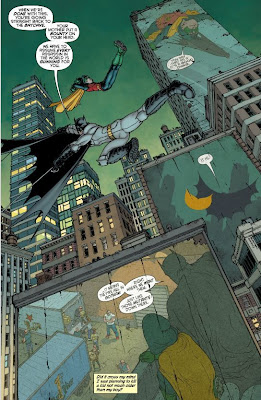 This certainly looks cool, but it doesn't seem to have much purpose or meaning beyond that, unless you want to tie yourself in knots trying to make a metaphorical connection to Batman being part of the city itself or something. Still, the panel on the middle building is especially nice, reducing Batman and Robin's swooping silhouettes to plain symbols, looking the most like artwork one would see painted on the side of an actual building.

Better still is a bit of action a couple pages later, in which Robin caroms around the page like a pinball, taking out a whole gang of goons in a series of fluid movements that are a delight to parse as one's eyes dart around the panel, trying to keep up with him: 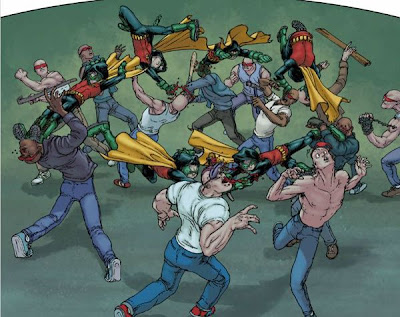 There's plenty of that sort of thing here, like the tiny Robin flipping a hulking thug over his shoulder, the Batmobile blurrily streaking down the road in a car chase, and blood splattering everywhere in the aforementioned slaughterhouse fight. Burnham gives the action, the movement, and the facial expressions just enough exaggeration to make this a larger-than-life romp rather than the horrific orgy of death and gore that most other artists would deliver (and have, quite regularly, if the pages one can sample from other Batman books are any indication). It's exciting and fun, filled with a spirit of adventure. If more superhero comics were like this (in the easy-to-follow action and enjoyable banter, at least, if not in the near-impenetrable plotting), maybe people would actually be interested in reading them instead of just watching better versions of them on movie screens.
Posted by Unknown at 12:00 PM