The Neverending Fray: The social commentary is still developing 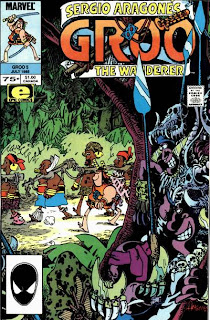 This issue tackles a big issue of a sort, that being slavery. As dumb as Groo is, he still has a moral code, as we find out when he witnesses a slave auction and calls it inhuman (he also says it is not his concern, so he's apparently willing to comment on evil, but not fight to correct it until he is forced to). He still gets caught up in the slave trade though, accepting a job offer on a ship that is "engaged in relocation of human resources for the betterment of his majesty's agricultural concerns." But once he finds out what he is a part of, he starts to struggle with the ethical implications: 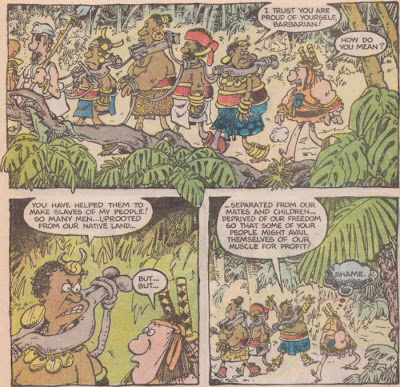 That's a pretty striking moment for Groo, who is usually only concerned with fighting and eating, and possibly earning rewards for his acts of bravery. But here he gets a bit of an emotional shake-up, which facilitates an ironic turn when the freed slaves turn out to be involved in the slave trade themselves. Man's inhumanity knows no bounds, but that's all right, since it means Groo can just kill everyone for trying to take advantage of him: 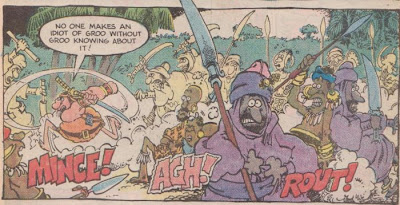 The issue is a bit of an odd one, with a little less humor than usual, what with the serious subject matter, and stretching on a few extra pages after the big "Groo slaughters everyone" scene to provide an ironic comeuppance for the slavers and one last joke about Groo sinking ships. The creative team seems like they're still figuring out the rhythms of the stories, determining what sort of things do and don't work on the fly; it's pretty interesting to see. And we always get fun scenes like this killing of a bunch of soldiers in a row: 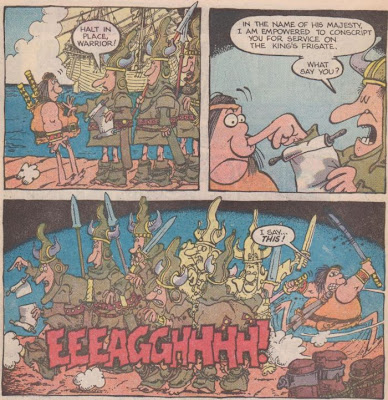 And I like this fight that Groo has with a tribal totem: 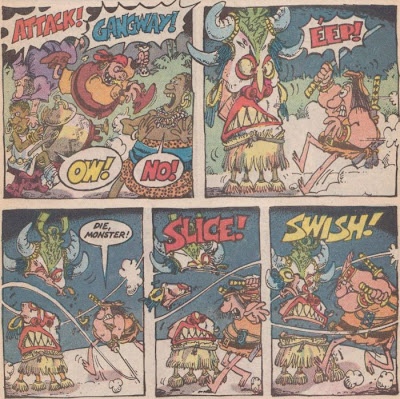 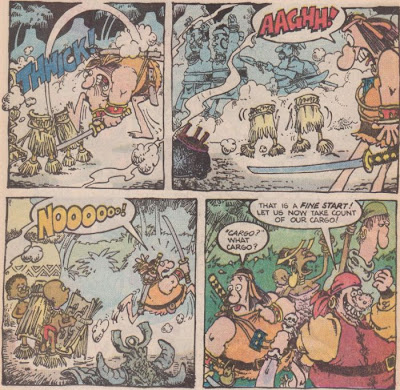 And this sequence is pretty hilarious; just look at those shredded clothes!: 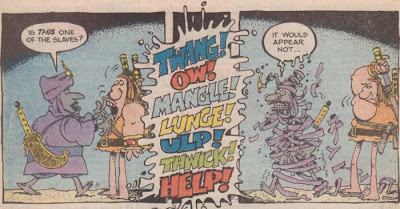 
This issue's stats:
Recurring characters: None. Since ships are involved, I expected Captain Ahax to show up, but I guess he hasn't been introduced yet. I wonder when his first appearance is?

Hidden message(s): Aw nuts, even though they're supposed to be showing up by this point, I didn't find any. Found it, thanks to prompting from commenter Brian Smith: as can be seen in the image above, the sound effects form an acrostic, with the first letter of each word spelling out "Tom Luth", the series' colorist. I haven't gone back to look at the issue, but I expect other sound effects throughout form the names of the other members of the creative team. I should've been looking for this, given last issue's basis for the hidden message, but I think I missed it because I've trained myself throughout the years of reading Groo comics to look for variations on "this is the hidden message" written somewhere in the margins of panels. I obviously need to broaden my scope of search.
Moral: "Freedom is not an individual effort. Yours comes only when you grant others theirs."
Spanish words: None, although the character name Macotela sounds Spanish (but isn't, as far as I can tell).
Running jokes: Groo is offered all the cheese dip he can eat to work on the ship, and his tendency to sink ships is mentioned, and even though it has barely been established, already gets upended. Also, this isn't a joke, but it's the first issue in which I've noticed the little skull on Groo's belt:

Mark Evanier's job(s): Dialogist
Letter column jokes: The style of the letter column seems to still be forming as of this issue, simply printing a bunch of complimentary letters with a note from Mark at the end, although one person seems to have picked up the joke of not knowing what Mark does on the comic. The letters all talk about the first issue, so maybe I didn't miss anything by not having any of the first four actual issues.
Posted by Unknown at 6:00 PM