The Neverending Fray: And so the mulching begins 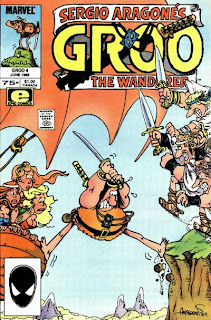 This issue is a bit lighter on the social commentary than the last one, although it does have a bit of a message about the treatment of women in society, which is a nice turnaround from the rape joke of the first issue. Groo stumbles across a village whose women are being abducted (via airship, which is a nice fantasy touch) and ends up traveling across the land, "training" the men of the villages to function as a rescue force, but eventually making a solitary assault on a mountaintop castle where it turns out handsome, toga-wearing men have brought the women to live lives of luxury and relaxation. Groo, of course, "rescues" them anyway, incurring their wrath when they are brought back to their families, who expect them to do all the work of farming, child-raising, housekeeping, etc. It's pretty amusing, but the story itself is kind of scattered, never exploring why the women are being kidnapped (is it a movement of women's liberation? Are they being placed in a harem for a different sort of exploitation? We never find out), and splitting its focus between repeated gags about the men being helpless without their wives, Groo's Seven Samurai-esque training consisting entirely of him beating everyone up, and Groo trying to chase down the airship, then spending most of the time in the castle on a joke in which some guards come up with an elaborate escape plan that they don't think anyone could actually pull off, only to see Groo charge in and follow their instructions to the letter (which seems to be a bit of a complex task for him, but we're still early on in the series). It's all amusing enough, but it's one of the rare Groo stories which prompts speculation as to what might have been done to make it better.

There's plenty to enjoy though, including the repeated gag of lots of word balloons filling panels as more and more characters chime in when hectoring Groo: 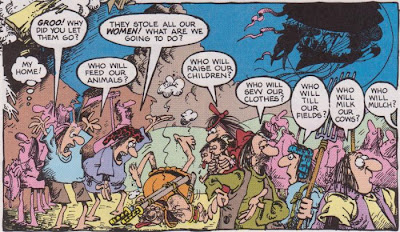 And lots of good visual details, including (on just this one page) all the bandages that Groo's trainees sport, the disarray that piles up without the women to do all the work, and more of Groo's awful table manners: 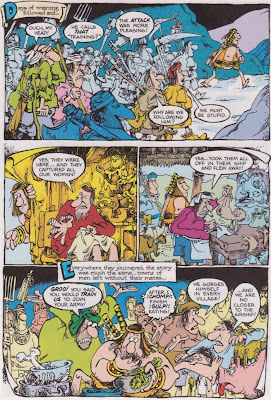 And there's some great slapstick humor when Groo chases the airship, with this gravity/orientation gag being my favorite: 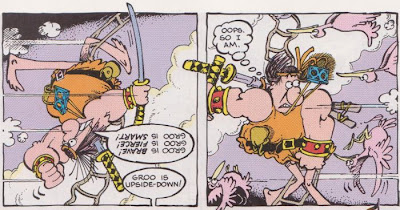 There's always something to savor in a Groo comic, even when the story is less than perfect. I'll take it.

Hidden message(s): Ah, here's where the trend started! The first letters of the captions in the opening panels of the issue spell out "GROO":

And the "message" continues throughout the issue to complete the title of the book. Now I'll really have to be watching for these.
Moral: "Remember that what is good for the goose may not be good for the gender." Wordplay!
Spanish words: None
Running jokes: Here's where the big one starts, in the scene in which the men are complaining about not having their wives around to do all the work, with a word balloon from off-panel saying "Who will mulch?" And thus begins the longest-running of the series' gags, one that was beaten into the ground from the start, even repeated over and over in this very issue. Somebody mentions mulch at every opportunity, including on the last page, with "Mulch Groo!" being one of the myriad threats shouted by the teeming mass of women chasing our "hero" off the page. This is one of those gags that could seem tiresome, but just gets funnier and funnier through sheer repetition, and it's one that the series continues to milk even through its current appearances. We'll have to see how it affects Conan the Barbarian in the upcoming Groo vs. Conan series...
Mark Evanier's job(s): Synoptist
Letter column jokes: In the afterword of The Groo Adventurer, Mark Evanier laments making mulch a running joke, noting that the Groo team didn't learn from the results of their cheese dip joke, which led to people constantly giving or sending them cheese dip. Given this precedent, he obviously didn't consider the possibilities of making a gag out of mulch, and sure enough, readers started sending them baggies of fertilizer. Joke's on them, ha ha. That doesn't stop him from employing his oft-used definition, which would appear in dozens of future issues of Groo: "Mulching is a process of inbred fertilization which employs certain decomposed organic materials--including, but not limited to animal sediment--to blanket an area in which vegetation is desired. The procedure enriches the soil for stimulated plant development while, at the same time, preventing erosion and decreasing the evaporation of moisture from the ground." (Please note: a certain somebody has ensured that this definition is the one used on Wikipedia). Evanier claims that they quit making mulch jokes, but that obviously didn't stick, since they're still doing them. Which is for the better; nonsensical, insular gags are the best ones, at least for nerds.
Posted by Unknown at 6:00 PM