UPDATED! The Neverending Fray: Groo vs. the exploitation of resources 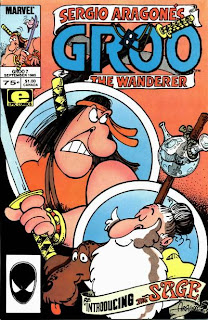 The Sage gets billing on the cover of this issue, but he is actually relegated to a backup story, like in the Pacific issues, so maybe that secondary feature is what is really being reintroduced. The main story here hints at some sort of commentary, with Groo falling in with some ivory poachers, then being directed toward more noble goals, and trying and failing to find an ethical way to profit. It's a bit scattered, with a kind of weak (but well illustrated) punchline, some character shortcuts like Groo being too easily swayed by a mid-fray argument (he also uses the word "rapscallion", which seems too long for his vocabulary, and he calls a guy a mendicant, which is a term usually directed at him), and the unsatisfying resolution of the bad guys just getting away and Groo just wandering off and into a search for an elephant graveyard, a second plot smooshed into the first one to pad out the story. I'm not sure if there's an environmental message, aside from "poaching is bad", but the story does seem to tend in the direction of the series' still-developing social commentary. At least there are some good jokes, like this silly elephant gag (I like the way the guy's dog laughs along with him): 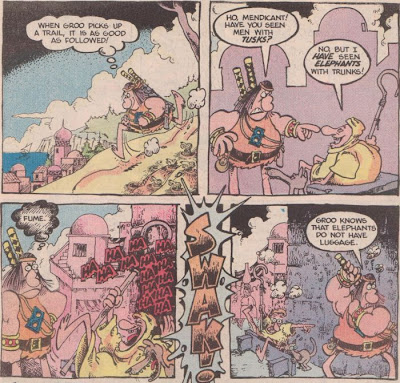 Or this classic back-and-forth argument: 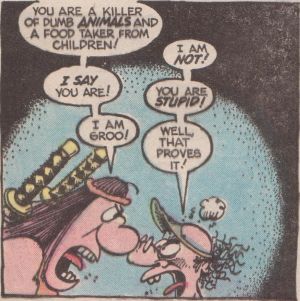 And I really like the way Sergio depicts this dying elephant, who, in his throes of sickness, has developed the ability to stand upright, the better to do a Redd Foxx impression: 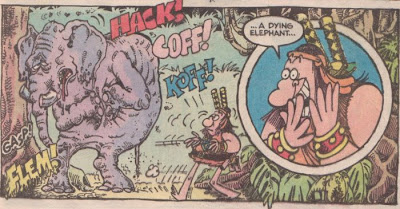 The Sage backup is one of his usual stories, where he is pressed into service by a monarch and uses his smarts to get out of it. I do like the way this establishes him as more than just a standard wandering wise man; when he is mistaken for a doctor and brought to the palace, he decides to go along with the ruse so he can see what he can get out of it. That sort of characterization gives him a nice edge (as does his gruesome solution to the problem of "healing" the sick king), and it sets him off against Groo nicely as a wanderer with intelligence who seeks to avoid conflict. He probably provides less opportunity for humor, which is why his stories are short, but there's still plenty of good Sergio art, as in this panel, when Sage's dog helps him usher some officious royal doctors out of the king's room: 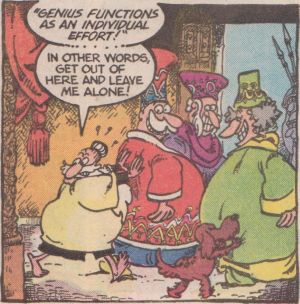 Gotta love those details; there's no end to personality in a Sergio comic.

This issue's stats:
Recurring characters: The Sage, of course.

Hidden message(s): I didn't find any, so hopefully a helpful soul will stop by to point out what I missed.
As instructed in issue #21, taking the first letter of every bolded word in the word or thought balloons reveals the message, "Congratulations! You have found the hidden message for this issue. There is no message in the Sage story. Say, why not try an issue of The DNAgents or Crossfire? On sale everywhere!" Mark Evanier took every chance for a plug he could get.
Moral: "No one profits at the death of another (except for the mortician)."
Spanish words: None
Running jokes: "Did I err?", cheese dip, mendicant, Groo sinking boats
Mark Evanier's job(s): Transliterator, Utterer
Letter column jokes: Some of the letter writers are attempting to add to the book's humor by this point, but the really good stuff is still ahead. Mark does get in a joke about nobody knowing what he does, as well as a reference to him not getting paid, which is another regular gag. Interestingly, one of the letters mentions a letter from the fourth issue which called the series "stupid and silly", but said "I have to buy it because it's a Marvel." I always thought that story was apocryphal, a gag about "Marvel zombies" buying every Marvel comic whether they liked it or not, and a running joke in which people claimed they couldn't stop themselves from buying Groo, but apparently there was at least one letter which stated this. How about that.
Posted by Unknown at 6:00 PM