UPDATED: The Neverending Fray: Groo vs. an imaginary beastie 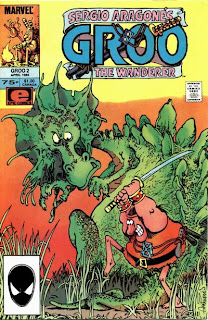 This issue picks up where the last one left off, with Groo about to kill the Minstrel for insulting him. But the troubador (a word which Groo uses, which seems like a few too many syllables for him) convinces the Wanderer to let him tag along and sing his praises, which immediately gets them thrown in jail after they wander merrily through a royal funeral procession. This somehow gets them sent on a quest to slay a dragon called the Mocosa (which is Spanish for "punk" or "delinquent", making for one of the first times the series used Sergio's native language to comment on the story), but end up finding something unexpected and causing the expected disaster.

It's a funny story, with lots of the expected details, the foremost of which is the depiction of the villain, who Sergio patterned after his MAD compatriot Al Jaffee, down to the way his name is spelled out in the curls of his hair: 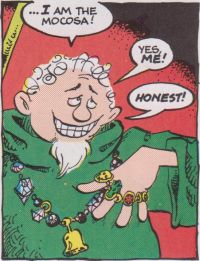 Also notable: the continued decrease in violence, or at least the goriness that comes with it. This isn't a detriment though; Sergio uses this as an excuse for more physical comedy, as when Groo grabs this guy by the lower jaw: 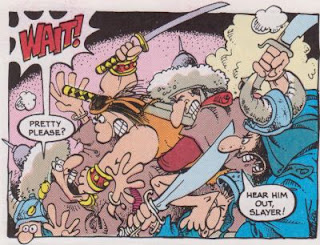 And Mark gets to include plenty of verbal comedy in the Minstrel's rhymes, especially in this bit, which has one of those classic interruptions just before a swear word is about to be uttered: 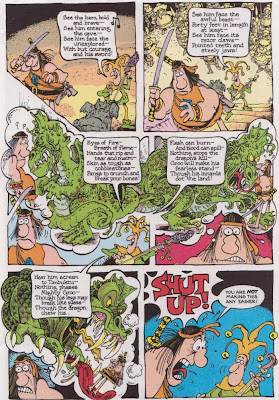 The comic seems to be settling into its rhythms at this point, with the smaller particularities of Groo's character and his world being established. We'll see how much of that setup is fully in place by the end of the four issues contained in the collection that I have. As expected, I'm highly enjoying this look back. More to come!

Hidden message(s): Still none? Am I ever going to find any?
Running jokes: Cheese dip, "Did I Err?", one of the first appearances of Groo's terrible table manners. There's also a page-long bit in which Groo tries to make a decision, a joke which would be refined and made funnier in later issues: 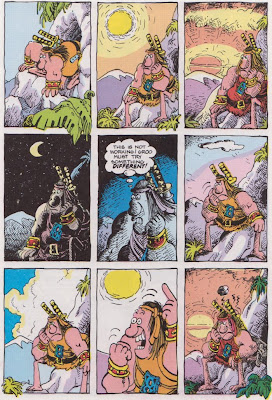 Mark Evanier's job(s): Cryptanalyst
Letter column jokes: Since I don't have the actual issue, I don't know, but in the intro to The Groo Adventurer, Mark contributes this pretty good joke: "By the way: If you folks should ever happen to meet Al Jaffee, try folding the right side of his body over this left side. Makes him look like a totally different person.) UPDATE: In the issue itself, the letter column page corrects some of the last issue's facts about Sergio, including another mention of Canter's Delicatessen (since Mark is hoping to get free food). This also lets Mark make another joke about what Sergio looks like with his moustache shaved off, and he later asks people not to send in cheese dip samples or request sketches. A letter writer makes a comment about what Mark does, and another one defines "mendicant".
-----

Thanks to reader Nicholas Doyle for sending me this issue, simply out of the kindness of his heart.