The Neverending Fray: The social commentary has begun 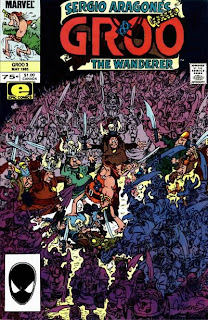 This issue is an early example of the series' social commentary, although it's more about basic human nature than any sort of modern issue. That aspect of humanity here is tribalism, the tendency of people to cluster in groups and build up antipathy for other groups, for whatever reason. Through his general cluelessness, Groo stumbles into one of these conflicts, between two societies or tribes, and bounces back and forth between them, always managing to ally himself with the wrong group at the wrong time, before setting off a long-simmering war and causing the usual death and destruction. It's a great example of the creative team's ability to set up a situation and wring out every possible comedic eventuality. First Groo wears a medallion identifying him with one side, incurring the wrath of the other when he wanders into their village, then he discards it just in time to happen across the border into the medallion-wearers' land, then, after recovering the medallion, returns to the outpost only to discover that it has been conquered by the medallion-free. Each new situation is another chance for frustration, and it highlights the basic absurdity of the whole conflict, the way the arbitrary membership in one group or another brings blind acceptance or hatred for no real reason.

And in the big finale, Groo wanders into a town which has been living under a peaceful truce between the societies for fifty years, and manages to set off the powder keg of smoldering hatred through a typical ignorant blunder, leading to one of the most chaotic scenes the series has seen yet: 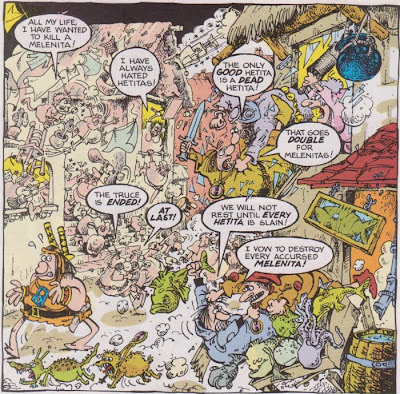 While we're on the subject of details, I like the opening panel of the issue, which throws in a quick joke at Groo's expense:

The caption describes the people's suffering, but it's all there in the image, and I especially like the guy working with a broken leg and the dog helping to hold up the wagon. And poor Groo just wants to help, but he can't even approach them without getting yelled at contemptuously by the sorriest of poor bastards. He's definitely the lowest of the low.

Finally, this issue is also notable for being one of the first ones (or maybe the first one altogether) to end with a moral, which would become a regular series tradition. I like this one a lot: "No matter who you may be, there is always someone who is a little worse because he thinks he is a little better." The series might not have needed its messages spelled out so explicitly, but it makes for a great way to cap off an issue.

Hidden message(s): Still none...
Spanish words: The warring tribes are called the Hetitas and the Melenitas, which, according to Google, mean "Hittites" and "little manes", respectively. Those don't seem to have any significance, but I like to see what random Spanish words are used, so I'm going to start tracking those too.
Running jokes: None, really, unless you count some of Groo's phrases, like "Groo does what Groo does best!" or "Remember! When Groo deals with you, you have been dealt with!" Those are more examples of Groo's verbal cadences than jokes though.
Mark Evanier's job(s): Explanator
Letter column jokes: Mark Evanier's prologue in The Groo Adventurer says that "there is absolutely nothing of interest" to say about this issue.
Posted by Unknown at 6:00 PM