UPDATED: The Neverending Fray: Never base your plans around Groo 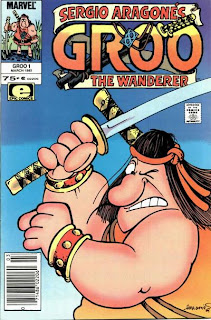 For the first issue of Groo's Marvel series (published through the Epic Comics imprint, which featured creator-owned  work), Sergio and company do a classic introduction of the character, but come up with a good reason for this by creating a new character, the Minstrel, who entertains people at a towne faire with a rhyming song about our favorite mendicant, describing his exploits when working for a beleaguered king who is enough of a greedy jerk that we can celebrate the inevitable downfall that will come from having Groo among his minions. First he sends him hunting, leading to an amusing bit in which Groo gets chased off a cliff by a bunch of sheep (note the excellent cartooning there, with the expressions of all involved frozen on their faces in midair, followed by a silly pileup and the reduction of Groo's reaction to eyes, a lolling tongue, and a flying headband): 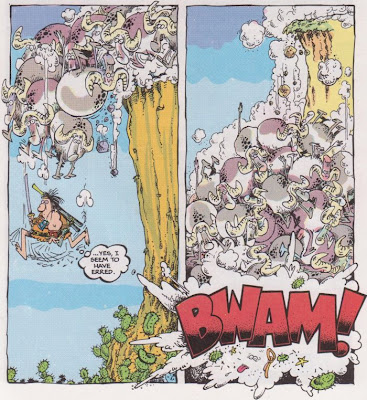 Then he sends him to guard a bridge, which Groo does by letting an invading army cross, but making sure the bridge isn't harmed. Finally, in the real meat of the issue, he sends Groo to lead a suicide assault on a well-guarded town in order to leave a smaller town unguarded for the real takeover the king has planned. But Groo, of course, defies expectations and manages to take over the large town through sheer stupid confidence, but relinquishes control when he learns that the king didn't actually want him to win. And thus, the pattern of Groo confounding any and all plans that others have for him is established, whether through screwing things up or succeeding where nobody expected him to. He's almost a force of nature, unable to be tamed and never doing what is expected, even when people expect him to be stupid and reckless.

And of course, he wanders into the towne faire just in time to hear the Minstrel making fun of him, allowing him to end the issue not by being chased off by a huge mass of people, but by inflicting his wrath (and causing some resultant chaos) on someone who has insulted him. Another trope established!

As usual, this issue is full of great Sergio details, like the pigeon handler in this panel being covered in bird shit:

Or the king taking the crown of the ruler of the defeated city and wearing it on top of his own crown: 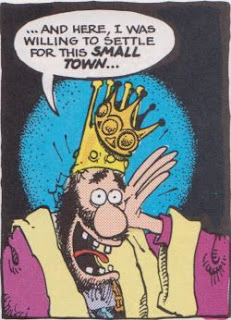 But nothing beats the title page spread, which depicts the towne faire in amazing detail, just crammed full of stuff happening: 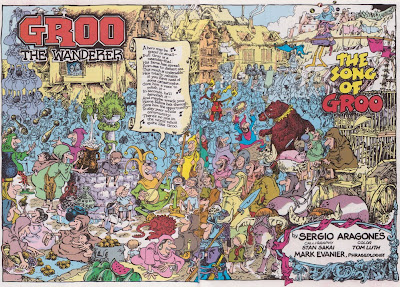 I think that's actually a big part of what makes this series work so well and feel grounded in reality even among all the silliness and jokes; Sergio puts so many earthy details in the book, like puddles on the ground, laundry hung out to dry on clotheslines strung between buildings, babies strapped to mothers' backs, people haggling over items at the market, onlookers staring up at a tightrope walker, and so on (I especially like the little touch of having Groo wipe his nose on the ornate ribbons draped around the credits box). It's such a lively scene, pulsing with activity, that it creates a sense that the world thriving beyond the bounds of the panels. As non-serious as the series is, it's full of this sort of worldbuilding, and that's another reason it's so fun to revisit all these years later.

This issue's stats:
Recurring characters: The Minstrel makes his debut, as mentioned, and interestingly, one of the visual gags based around him is only partially introduced, that being the ever-changing decorations on the head of his lute. There are a few panels in which it has a dragon or bat at the top of it, but just as often, it's a plain old instrument. Weird. There's also Taranto, who at this point seems to be a member of every army that Groo fights in. UPDATE: It's not included in the trade collection, but the actual issue contains an introductory page  similar to the one from the first Pacific issue, in which Sergio details Groo's previous publishing history and how he wanted to retain ownership of the character.

Hidden message(s): I still didn't find any
Running jokes: "Did I err?", a mention of cheese dip
Mark Evanier's job(s): Phraseologist
Letter column jokes: I'm reading this in The Groo Adventurer, a collection of the first four issues, so there are no letter columns. But in the intro, Mark laments the Minstrel as "a new character cobbled up by Sergio for no apparent purpose, save to see if he could force me to spend more time on a page than he does." UPDATE: In the issue itself, the letter column page contains a list of "50 important facts about Sergio Aragones", making for a sort of biography of Sergio, but also including jokes about not knowing what Mark does on the series, what the two of them eat when they go out to lunch at Canter's Delicatessen, and what Sergio looks like with his moustache shaved off.
-----

Thanks to reader Nicholas Doyle for sending me this issue, simply out of the kindness of his heart. You're no mendicant, Nicholas.
Posted by Unknown at 6:00 PM