The Neverending Fray: Now this is a Groo story 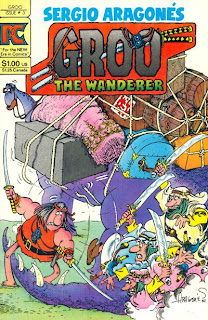 This issue seems like the point where Sergio and company solidified the structure of a Groo story. He starts out lost in the desert, stumbles across a caravan, hitches a ride, defends them against some thieves, then sticks around for the rest of the journey in order to get a reward, only to end up with a bunch of people mad at him and wanting him dead. The last two issues also ended with scenes similar to this one, but this seems more pure, somehow: 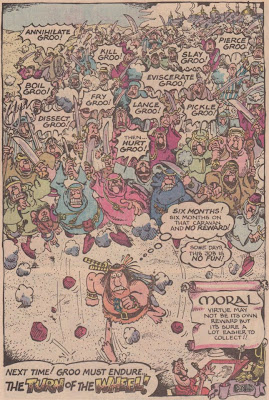 It might be because Groo was attempting to help people out (and help himself, since he was offered a reward), by delivering the caravan's cargo safely to its destination, but it turns out that he was really just propping up a tyrannical leader that the common people were trying to depose, which leads to a pretty typical scene in which he realizes that he was actually the bad guy and everyone hates him: 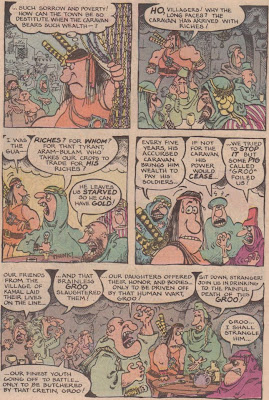 I love the way Sergio draws out the tension, with sweat starting to pour down Groo's brow as he hopes nobody identifies him, even though it's all but inevitable:

The full journey of the caravan is pretty funny too, as Groo gets more and more agitated the longer it takes, working harder and harder to shorten the journey by moving tons of rocks by hand or dig the beasts of burden out of deep pits where they were trapped, labor that will surely end up being for naught. It's cruel to see him suffer, but he's so much of a doofus and just far enough on the wrong side of morality that we don't mind.

Attention should also be paid to the continued worldbuilding that Sergio does here. While there's not really a persistent geography or power structure, he does establish a general lawlessness throughout the land interrupted by occasional kingdoms that are usually at war with each other. And while it seems to be set in a sort of past, there are no obvious historical markers. But it's all grounded enough that there's a real sense of place; if it weren't for giant lizards and other creatures, and the occasional magic-wielding wizard or magician, it would seem plausible that this could be an exaggerated version of Earth's history. But even with the occasional fantastical element and the cartoony action, I love how realistic the settings are. Just check out the earthy detail of this issue's title spread, which establishes the desert setting and the scale of the caravan, but fills out details like clouds of dust, grains of sand, patterns of lizard scales, and the intricate webbing keeping all the crates, barrels, and bags affixed to their carriers: 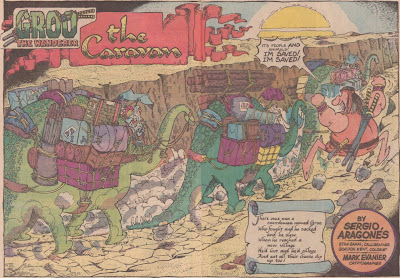 While I'm talking details, I should also mention the backup story featuring the Sage, which features a final page packed with tiny figures (including Groo!) and word balloons, another great example of how much information Sergio could pack into a bit of space: 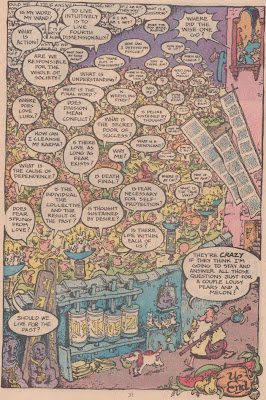 There are some good gags in there too, like "Is wrestling fixed?", "Are there elfs in Poughkeepsie?", and "What does my nose mean?" I suspect Mark Evanier came up with most of those, and his contributions to the series should continue to make themselves more obvious, I imagine.

"Adult" content watch: There are some bare breasts when a bunch of "gorgeous, unescorted, nubile women" try to distract the caravan, and I still find myself surprised by how much blood is spilled in scenes like this:

Next: I don't have any more of the Pacific issues (which means I'll miss the first appearance of Chakaal), so next up is "The Swords of Groo".
-----


This issue's stats:
Recurring characters: Just the Sage in his backup story.
Hidden message(s): Still none that I could find.
Running jokes: Mendicant
Mark Evanier's job(s): Cryptographer, Glossator
Letter column jokes: Some actual letters this time around, and while Mark doesn't answer them individually, he drops the first example of the "what does Mark Evanier do on this comic?" joke. He also states that Sergio won't send any sketches to anybody, which isn't really a joke, but did become something of a regular warning as the years went on and more and more sketch requests came in.