Here's an odd Jack Kirby-related couple of books that I found in discount bins:

These were apparently part of an attempt by Topps Comics to establish a "Kirbyverse" in 1993, featuring various oddball characters created by Kirby, and also planning to incorporate his Captain Victory and Silver Star characters, because why not? Unfortunately, judging by this sample anyway, they function about as well as most Kirby Koncepts do when other creators attempt to take them on. Bombast #1 is written by Roy Thomas and Gary Friedrich, doing more of an impression of Stan Lee than Kirby, and also throwing in Erik Larsen's Savage Dragon as a guest star. It starts with an earthquake in Chicago, which causes a fissure to open in "Grant's Park", and when a "young black junkie" falls in, he discovers what turns out to be a 15,000 year old guy just as he awakes from stasis, then stumbles around the city getting into awkward situations and random scuffles with people because he doesn't speak the language and can't understand the cold, lifeless machinery that everyone uses. Savage Dragon (who is a Chicago cop, I guess?) shows up to fight him for a while, but he runs away because he doesn't want to fight, even though he has super powers and his name is Bombast. He eventually meets up with some other refugees from the past, and maybe they team up to fight bad guys or something in future issues. Whatever.

The art is by Dick Ayers, but it's inked by John Severin, making for an interesting match, all gritty realism on top of Kirby-ish poses. It doesn't really work, but it does yield occasional bits of oddness, like the way images of which figures are floating in blank space are suddenly interrupted by a detailed panel of a guy lying in the street: 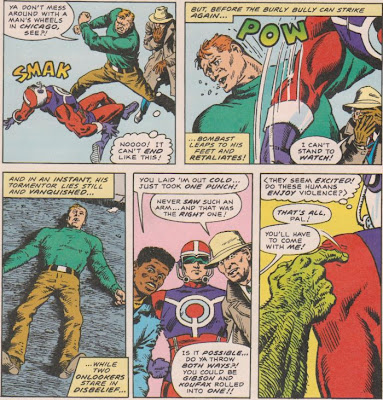 I do like this panel, which seems kind of Golden Age with its small figures: 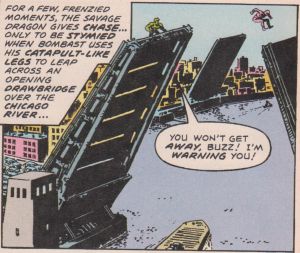 But surely somebody must have realized how awkward this panel looks, as if Savage Dragon suddenly grew ten stories and grabbed Bombast by the ankles: 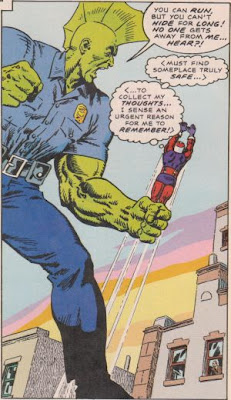 The art doesn't really matter when the writing is this embarrassing though. I would blame Roy Thomas for the ridiculous, silly dialogue, but Friedrich is credited for the script, so I guess he's responsible for terrible attempts at slang like: "Yo' momma! Who's that? Sure ain't no extra from a Spike Lee movie!", "Jump back, Jim! ...This dude's fast...and strong...and definitely baaad!", "We ain't exactly bro's, Moe! So I'm splittin', see?!",

It's really just a silly trifle though, with the cover being the best thing about it.

More interesting, however, is Satan's Six #1, probably just because it features eight pages of actual Kirby art (which were probably produced years earlier, maybe even back in the 70s), inked by a variety of comics people, including Kirby mainstay Mike Royer, Terry Austin, Steve Ditko, and, on the cover, Todd McFarlane. It seems like it was supposed to be a humorous series, about a team of souls from throughout history resurrected from limbo and sent to do Satan's bidding on earth, but they keep screwing up and accidentally doing good. That might have been the intent, anyway, but the comic that gets built around those pages is just horrible, with disgustingly ugly 90s art by John Cleary that looks like exaggerated Todd McFarlane proportions and expressions wedded to the elongated figures that Adam Kubert might use when depicting a psychedelic freakout: 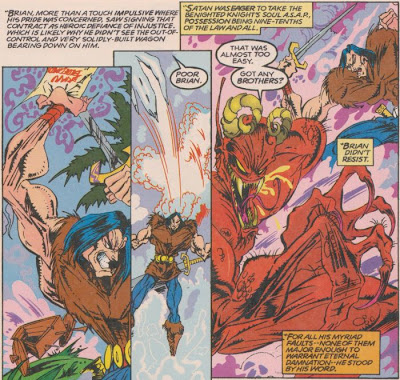 It's also very obnoxiously written by Tony Isabella, with a "sexy" angel narrator speaking directly to the reader and making comments about the comic itself, along with lots of supposedly humorous dialogue screamed at each other by leering characters in every panel. Ugly, awful comics.

But the Kirby pages themselves are worth a look, especially to see the differences between the inkers' interpretations. Terry Austin, Mike Royer, and Joe Sinnott provide a classic Kirby look, and Steve Ditko works in some of his billowing clouds: 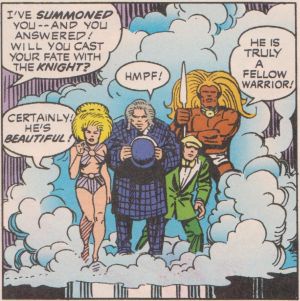 But most fascinating is this page by Frank Miller, which somehow meets Kirby halfway between their two styles, softening the edges of the lines and deepening the shadows: 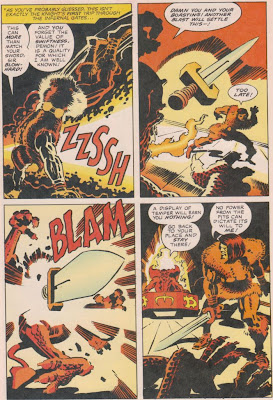 I also like this Sinnott-inked page, but mostly because the "Hellicopter" depicted makes me think of a Kirby version of the Bullet Bills from Super Mario Bros.: 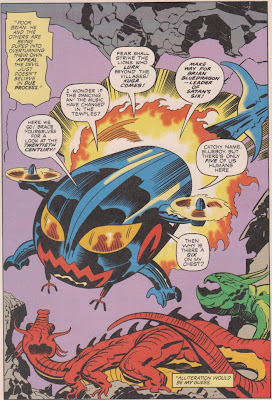 It might have been interesting to see where Kirby was planning on going with these characters, but being the 90s, it's even more awful than usual to see somebody else try to pick up where he left off. But was it worth 50 cents? Sure. You can't have too much Kirby art cluttering up the longboxes.
Posted by Unknown at 6:00 PM