"This is Micro-Mark's hour! There's no need for intrigue or great strivings--the cosmos lies open to button-pushing babes!"

Welp, it's time for the final edition of Fourth World Panels, taken from The Hunger Dogs, Jack Kirby's graphic novel (as DC called their thick pamphlet format back in the 80s) "ending" to his most personal work: 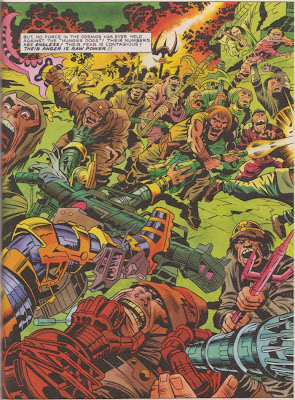 The circumstances of this story are interesting; apparently Kirby created a single-issue ending to the Fourth World saga, which would have originally been published as the final issue of the New Gods reprint series, but it didn't really work at that length, so he got to expand it to a graphic novel. The seams do show a bit, at least as they are presented here in this collection, but he did manage to bring everything to a fairly satisfying close, while updating the story to reflect the decade that had passed since its last installment. That means that the main conflict is less about totalitarianism and oppression and more about the fear of destruction that came with the atomic age. Darkseid is less focused on Anti-life, having replaced much of his forces with automated machines, and his newest threat is something called Micro-Mark, which turns out to be the brainchild of Esak, who was the kid Metron was taking on tours of the galaxy in one of the early issues of New Gods, now deformed by accidents that occurred with experiments he performed, an experience which caused him to defect to Darkseid. Interestingly, Darkseid seems to be struggling to retain control over his domain, becoming eclipsed by the new technology that is beginning to render him obsolete: 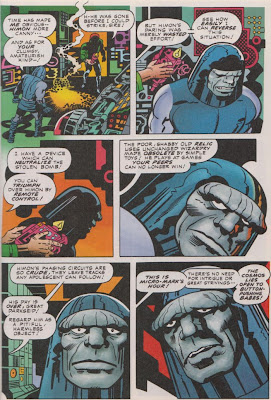 Micro-Mark seems to be all about the fear of atomic annihilation, the power behind bombs that bring about the end of New Genesis (in what was probably one of the last examples of the incredible collages of the kind that Kirby did so well), but also threaten Apokolips in their instability. As with nuclear bombs, the existence of Micro-Mark is enough to assure mutual destruction, and that causes the eponymous Hunger Dogs, the poor, starving denizens of Apokolips, to rise up against their oppressors, although Darkseid's eventual return to full control is all but inevitable. 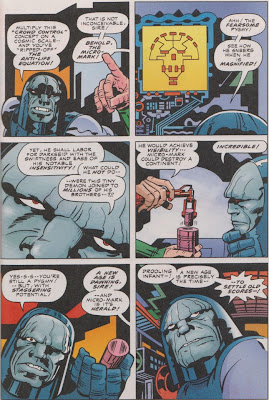 It's a nicely open-ended finish to Kirby's grand saga, and while it's a shame he didn't get to do the Shakespearean showdown between Darkseid and Orion that he had wanted to do to end his story (by this time, DC had appropriated the characters, started using them in other books, in the Super Friends cartoon, and as action figures, and thus they couldn't be killed off), it works as well as one could probably hope at this point in Kirby's career. He gets in plenty of good action, crazy visuals, and excellent dialogue:


"Drooling infant--! A new age is precisely the time--to settle old scores--!"
"Dance, Himon! Phase in and out like a dancing flea! But, in this new era--look for the shadow of my descending fist!"
"Then, let it be said that we must be the bravest among all who came before us! Let it be said that our wisdom is wed to the most terrifying risk ever taken!!"

He gives Orion a love interest in Himon's daughter Bekka, and Lightray gets to show up for a few fun scenes. It might not be the finale that we would liked to have seen, but it works for what it is, and there are plenty of great moments. I like this panel, in which Lightray zooms down from the caption onto the surface of Apokolips: 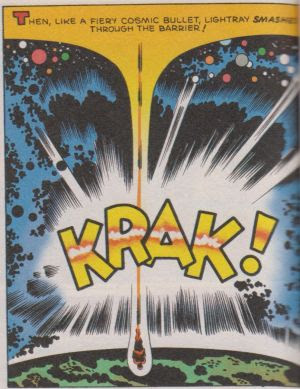 This splash page of a prisoner being led into a lab to act as an experiment subject is pretty chilling, a good example of the Holocaust imagery that Kirby occasionally used: 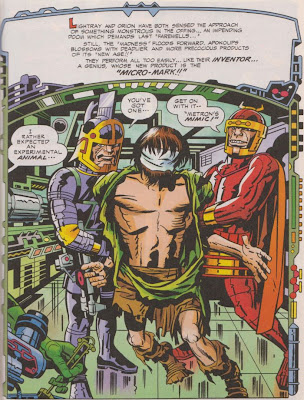 And this scene of pestilential creatures devouring New Genesis on a microscopic scale is pretty awesome: 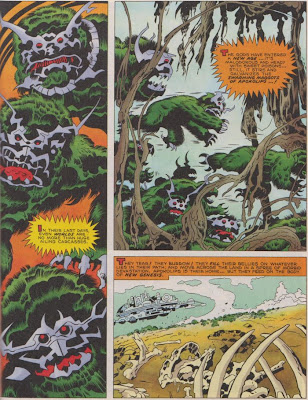 I'll take whatever Kirby I can get, even if it's not ideal.

Next? I'm not sure. Kamandi? The Demon? Something else? We'll see!
Posted by Unknown at 6:00 PM