The Neverending Fray: Continuity? In Groo?! 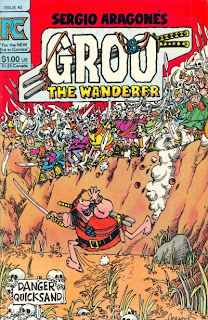 This is kind of freaking me out, but there seems to be something of an ongoing plot in this series so far, concerning the continuing threats against Groo's life that we saw last issue. He still doesn't know who is behind it, prompting another flashback detailing a screw-up that got him on the shit list of a monarch with an army. The main plot sees him working as a sedan-chair-carrier/guard for a royal messenger, leading to a couple violent battle scenes. Check out how he basically cuts this guy in half: 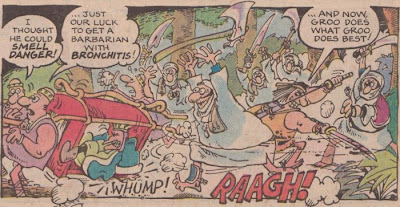 He ends up doing his best to carry out the delivery of the message, but only gets himself in more trouble, establishing one of the series' ongoing themes: Groo is well-meaning and tries his damnedest to get his job done, no matter how menial or degrading it is, but he'll inevitably screw it up and bring chaos, destruction, and violence upon everyone, especially himself. That's just about every issue of the series in a nutshell.

There are some more great gags here (although a bit less than last issue, with this one focusing more on plot), including one that I always like, when Groo is looking for a job and comes across somebody who says "I need another man badly!" leading to this panel: 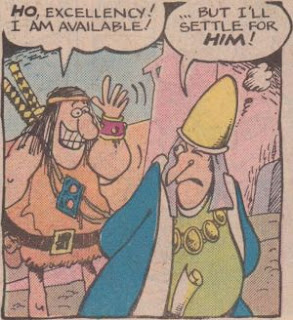 As for "adult" content, there are some bare breasts in the various crowd scenes, including some prostitutes waving from the window of a whorehouse on the title page: 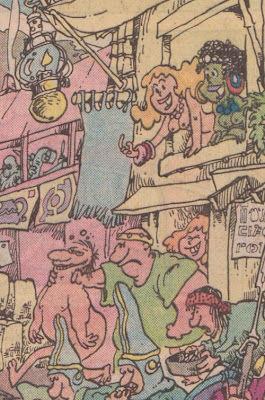 I do love the details and gags that Sergio packs into the pages. For instance, in the flashback, Groo leads some men in a drunken pillage of a town, and the scene going on in this window, in which a guy guy appears to be pouring wine on his head while assaulting a woman, cracked me up: 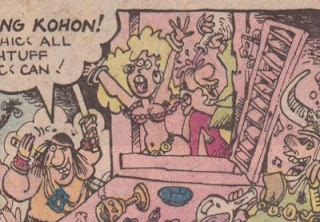 And in this scene, a jester attempts to sneakily pull the tassel off a lady's nipple, before getting slapped in the next panel: 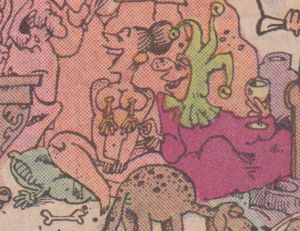 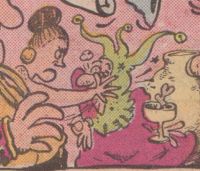 There's always something amusing going on in Sergio's pages; these things are endlessly re-readable, and you'll notice something new every time.

One more thing to note: there's a double page splash in the back of the issue that forms a map of Groo's travels, which is notable not just for the excellent art that crams in plenty of gags and interesting landscape variations, but also just because it's strange to think that such an image is possible so many years and issues later. At this early point, it works, but the adventures and travels became so innumerable over the years that it's weird to think that this once existed: 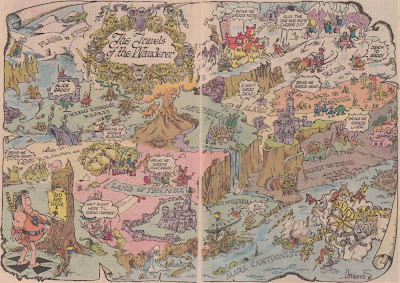 This issue's stats:
Recurring characters: Taranto again, and the Sage gets another backup story, which also features a Groo appearance that sort of furthers the ongoing plot
Hidden message(s): Still none that I saw; I wonder when they started doing those?
Running jokes: Groo gets called a mendicant, initiating the gag of "You dare call Groo a mendicant?", followed by slayings and "Gee, I wonder what a 'mendicant' is?"
Mark Evanier's job(s): Interlocutor, Verbiage
Letter column jokes: It's not a regular letter column yet, although Evanier does include some excerpts from letters, one of which jokingly requests a sketch from Sergio. But it's mostly text about Gordon Kent going crazy trying to color Sergio's detailed art, which sort of starts the trend of Sergio-bashing, if in a pretty complimentary manner.
Posted by Unknown at 6:00 PM