"Thus, we turn a death trap into a life journey!"

It's all about love in the eighteenth and final issue of Mister Miracle, which gives us the obvious choice for this Fourth World Panel: 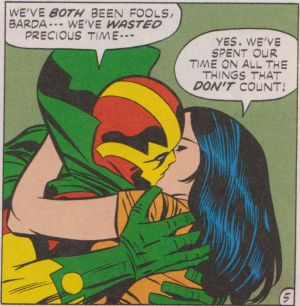 This issue has all the signs of a rushed finale, gathering a bunch of guest stars (just about the whole Fourth World cast that hasn't been exiled to some remote planet, with Granny Goodness, Virman Vundabar, Kanto, and Doctor Bedlam representing the bad guys, and Orion, Lightray, Highfather, and Metron saving the day from New Genesis, plus everyone fearing the eventual arrival of Darkseid) for the sudden wedding of Mister Miracle and Big Barda, then sending them off to keep fighting their eternal battle. It's all a bit rushed, as if Kirby's bringing back the gang for one last spin and jumping to the one plot point he wanted to get to, but there's some nice action and dialogue while it lasts. I especially like this image of Scott crushed into the ground by Granny Goodness's gravity weapon: 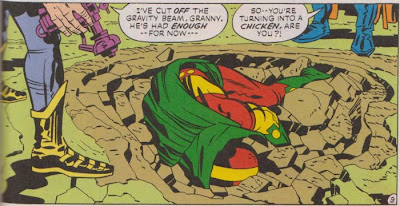 And Orion's sudden appearance in an explosion of destruction is a great reintroduction: 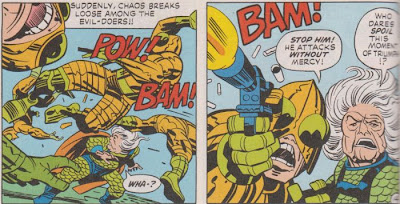 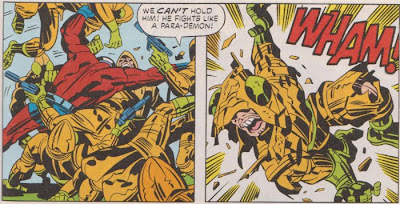 I also dig the way Darkseid arrives like a force of nature, his own followers fleeing in terror: 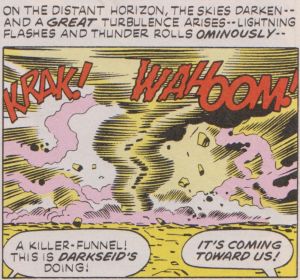 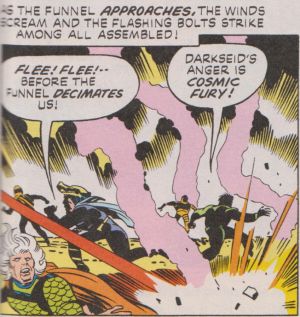 And his response to the wedding he failed to stop is classic: 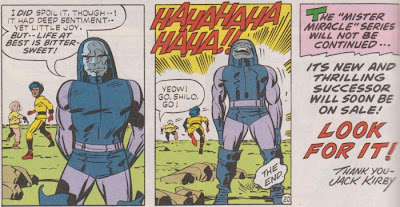 That's a nice Kirby moment, a response to the cancellation of his magnum opus, yet an acknowledgement that he'll never give up. It took ten years, but he eventually came back to finish things. We'll see how that turned out.