"In the context of destruction, Orion transcends the term! To oppose him is to die! To survive him is life lived in fragmented form!"

Coming close to the big finish, here's today's Fourth World Panel, from the story "Even Gods Must Die!", which was published as the last issue of a series reprinting New Gods in 1984: 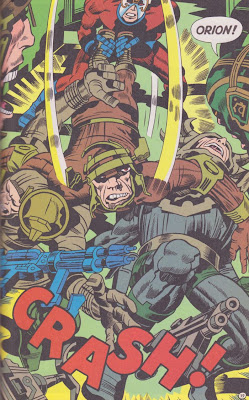 That full-page, full-bleed image is a pretty good sample of what this story contains; it's 48 pages of nonstop action, starting with Orion arriving on Apokalips via Boom Tube, then wrecking his way across the planet in an attempt to confront Darkseid and free his mother, Tigra. As awesome as it is, the art is occasionally a bit awkward, as Kirby's work tended to be at that point in his career. Darkseid, for one, looks like a heavy-browed neanderthal with a bucket on his head rather than the stony-faced, cold-hearted force of pure evil that he was in the earlier Fourth World issues: 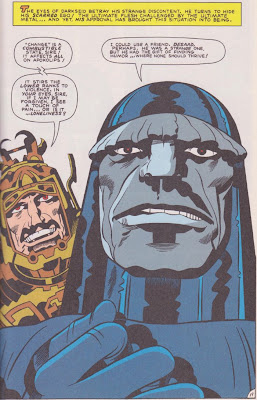 And this super-deformed version of Granny Goodness makes me laugh: 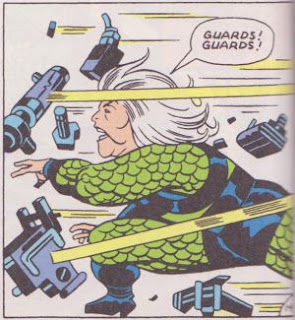 And there's at least one silly bit, in which Lightray, who shows up to help Orion, creates a "light mirage" of a pile of bones to distract the giant dogs a group of bad guys are riding. And when the two of them part, they give each other an extremely dorky thumbs-up. It's distractingly dumb.

But there's also a huge amount of awesomely bombastic action, Orion smashing his way through page after page of machinery and wreckage, completely devastating everyone that gets in his way: 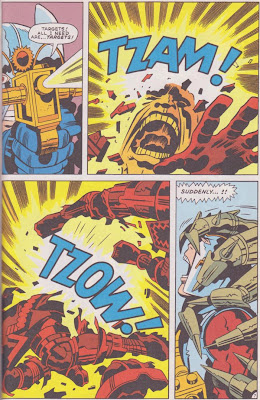 Look at that guy's head exploding! That's as savage as anything Orion ever did in this series. Kirby also goes all out with the crazy designs here, coming up with bizarre panel layouts and filling pages with weird Kirbytech: 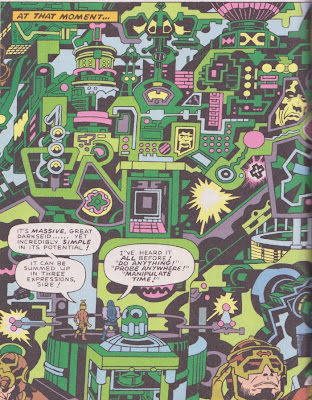 He adds some real horror to the story too, like when Darkseid decides to resurrect Desaad: 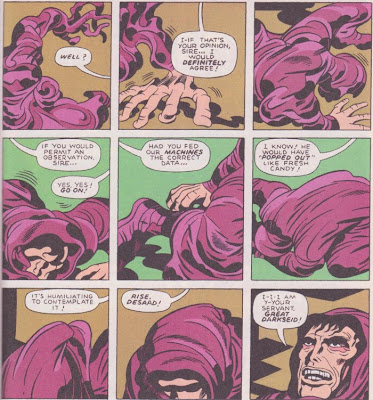 Or when Lightray just cold drowns a guy in molten metal: 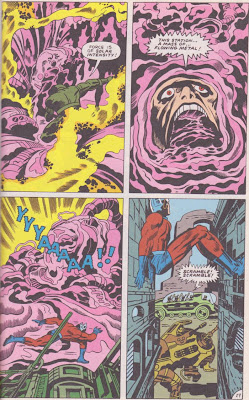 Maybe it was the increased crudeness of Kirby's style at this point, but that gaping mouth screaming out from a pool of flowing death is hauntingly awful.

Kirby gets in a little bit of commentary as well, with Darkseid's minions (especially that guy with the goofy moustache in the image above) convincing him to allow them to reanimate his dead minions Desaad, Kalibak, Steppenwolf, and Mantis, but they're nothing but personality-free shells of their former selves. That's something Kirby knew all about: having his creations continuing to plod along like zombies long after the life has been drained out of them.

As for the final confrontation between Orion and Darkseid, it's as exciting as one would expect, and it ends in a horrifying and brutal manner, setting up the final chapter of his saga perfectly. I'm not sure what to expect, but I'm hoping it all goes out with a big bang. No matter what happens, I'm sure it will be awesome.

Next: The Hunger Dogs!
Posted by Unknown at 9:36 PM