King of RPGs: I'm not even worthy to be a jester 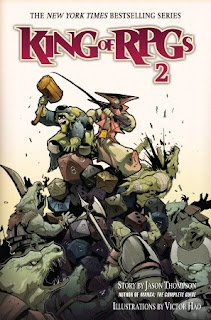 Jason Thompson successfully brought together two of his passions, manga and role-playing games, in the first volume of this series, and he expands on that foundation nicely in this second installment, crafting a volume-long story that integrates classic and online gaming, bounces new and returning characters off each other in enjoyable ways, and piles goofy, over-the-top twists and turns atop each other until everything climaxes in a high-stakes contest for all the marbles (or twenty-sided dice). It's tons of fun, and even though it's part of a continuing series, Thompson introduces all the players and keeps the story self-contained, making for a satisfying volume that works fine on its own.

The story here sees main character Shesh, who may be the ultimate gamer, due to an ability/disorder in which he suppresses his identity and takes on the persona of whatever character his is playing, get inadvertently sucked back into the online game "World of Warfare" (or "WOW"), which he left behind after a disastrous, near-fatal marathon session that almost drove him insane. Upon his relapse this time, his friends band together to help, but only manage to transfer his psychotic warrior character into the "real world", just in time to have him compete at a convention sponsored by the software company behind the game. The competition doesn't go as planned, however, due to the interference of a rabidly anti-gaming security officer and the artificial intelligence that runs WOW's servers, so everything ends up coming down to a "Mages and Monsters" campaign run by Shesh's pal Theo Dudek, the ultimate Game Master. It's a continually increasing series of unlikely, ridiculous events, and it's often quite hilarious, giving Thompson chances to have his characters spout inversions of oft-repeated lines like "No, Shesh! If you die in the real world, you'll die in the game too!" But what's more, the game itself is grippingly exciting for outside observers as well as the players themselves, its plot taking unexpected, unplanned-for turns, participants being influenced by factions seeking different outcomes, and the odds stacked against those the reader wants to see win in ways that allow for especially awesome last-minute reversals of fortune and grand displays of role-playing at its best.

Artist Victor Hao continues to provide nice art that's manga-influenced, if not an exact replica of the standard Japanese style. He does have some quirks, especially in the depictions of characters' mouths, which often feature teeth clenched jaggedly together in distracting ways or open weirdly to display the back molars at strange angles: 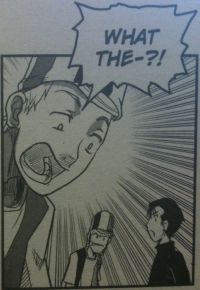 But the expressive character work makes up for any eccentricities, as does the depiction of the games' events taking place alongside the "real world" actions of the gamers themselves. The way Hao portrays the World of Warfare scenes is especially interesting, with characters and scenery counterintuitively depicted in a manner that is slightly rougher and sketchier than those outside of the game: 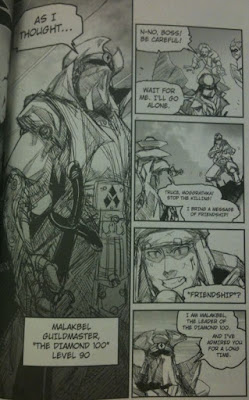 While one would expect sharp imagery to replicate computer graphics, this actually emphasizes the unreality of the proceedings, as if the world of the game is less defined than the real world, giving everything a slightly shoddy surface. It works well as a way to differentiate the different levels of reality, although it's notable that the events of Theo's tabletop RPGs don't suffer this roughness. This might be due to the overwhelming detail provided by his skill at worldbuilding, or just because Thompson favors the old-fashioned dice-and-paper style of gaming, but it's a notable difference. Hao still differentiates those scenes though, with a notable example being a scene-setting splash appearing as rougher sketches, as if the imagery is still forming in the players' imaginations: 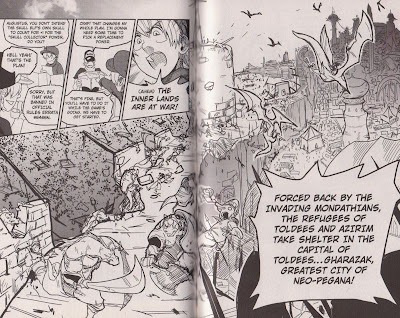 It's certainly a nice-looking book, and a heck of a fun read. Thompson has obviously thought a lot about RPGs, both on- and off-line (the discussion of goldfarming seems to put him in line with notable authors like Neal Stephenson and Cory Doctorow), but dry theory is the last thing that comes across here. Instead, readers will be likely to want to jump into a role-playing game themselves, which is a testament to how well the enjoyability and appeal of the activity is communicated. Hopefully, future volumes will continue to appear and recruit new gamers for some time to come.
Posted by Unknown at 6:00 PM