Rohan at the Louvre: And also in crazytown

Rohan at the Louvre
By Hirohiko Araki
Published by NBM 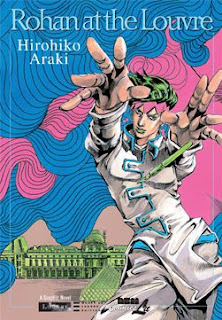 Hirohiko Araki is an inspired choice for the line of European graphic novels published in conjunction with the Louvre, given that his work seems (from the outside viewpoint of someone having never actually read any of his comics) completely nuts, but also quite creative. This book is actually a spinoff of Araki's series Jojo's Bizarre Adventure, starring a manga artist named Rohan who has the power to "read" people like a book, which means their faces actually peel open like pages, allowing him to see the words printed underneath, which are apparently their life stories. He gets a chance to visit the Louvre in order to view a cursed Japanese painting that was made with "the blackest color in the world", an excursion that ends up being disastrous, as the painting, which had been sealed away in an abandoned underground archive, unleashes the ghosts of Rohan and his museum worker companions' ancestors, the vengeful spirits visiting gruesome fates on the living. It's pretty weird, with plenty of striking imagery, and maybe some sort of message about learning from the past? It's hard to tell, and it's curious why the Louvre would commission work like this, since it only barely features any imagery of the museum itself or any of the actual artwork that resides there. Perhaps it's meant to foster the idea that all sorts of unknown treasures are hidden away in the Louvre's vaults, waiting to be discovered (or unleashed)?

That's kind of beside the point though; this is really all about Araki being weird. There's a bizarre energy to his art, from basics like costume design (Rohan wears his inverted Jughead hat at all times, as if it's part of his head) to the poses characters strike, which often consist of odd bodily contortions or flamboyant gestures: 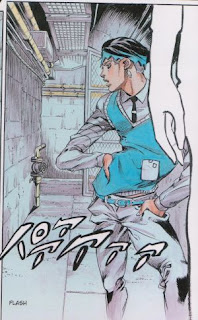 And while exaggerated emotions are common in manga, Araki's characters seem especially prone to crazy outbursts: 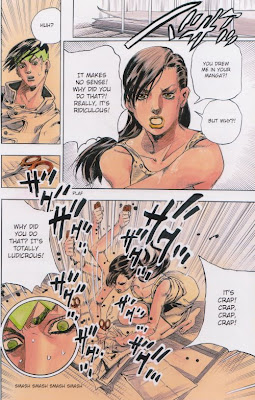 And that's during the "normal" parts of the book; when the ghosts attack and things go really crazy, the atmosphere turns creepy, and the horrors inflicted are rather disgusting: 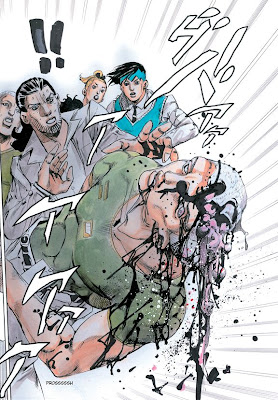 The plot is oddly-paced too; Araki spends the first fourth of the book relating a tale from Rohan's youth, when a woman moved into his grandma's boarding house, expressed interest in his budding manga career, told him the story of the cursed painting, and cried a bunch about her failed marriage before disappearing. Then the story jumps to the present and the rest of the book consists of what ends up being a rather brief visit to the museum before ending abruptly after Rohan escapes. He apparently learns some sort of lesson about honoring the ghosts of the past or something, but it's hard to take anything away from the proceedings other than a general feeling of unease.

But it's a neat comic nonetheless, a nice chance to see manga art in color, which is a rarity, at least for work that has been translated into English. It also seems like a good sample of Araki's work, something that might point readers toward his other stuff, with expectations of nonsensical craziness and eccentric art, and the feeling that anything can, and probably will, happen. Jojo, here we come.
Posted by Unknown at 6:00 PM