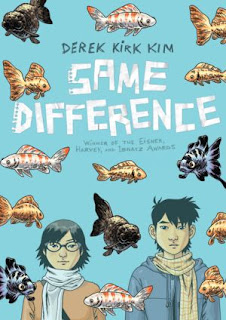 Reading this book a decade or so after it was first published, it's doesn't seem especially unique, being one of a number of slice-of-life stories about young people hanging out, having amusing conversations, coming to terms with their past, and confronting their futures. But it was probably something of a revelation when it first appeared, seeming like a less cynical version of Ghost World that was still full of swearing, scathing humor, and lovely art. Plus, it was originally serialized online, leading another revolution in an area of comics that has since become fairly commonplace.

But while this comic might not stand out as especially unique in 2012, it's still a really nice read, demonstrating Derek Kirk Kim's skill at quickly defining interesting characters, crafting funny and enjoyable dialogue, and illustrating what could be mundane scenes rather beautifully. In fact, what could end up being something of a "talking head" book is never visually dull, from the opening scene in a Vietnamese restaurant that is framed through an aquarium full of colorful fish (this is captured in the design of this edition, which has a clear plastic jacket with the fish printed on it, making them seem to swim in front of the characters on the cover below), to scenes that take place in a supermarket and on a beach, regularly spotlighting nicely detailed scenery that grounds the cartoony depictions of the characters in a very real setting. And those characters themselves are marvelously expressive, pared down to only the most necessary details but still able to convey a multitude of emotions through their faces and gestures.

From a plot standpoint, this is one of those stories about twentysomething hipsters reflecting on their pasts, learning lessons, and trying not to be assholes. This may or may not appeal to everyone, but for those open to this sort of thing, Kim nails the structure and character beats, making those moments of realization that come from chance meetings or eye-opening personal interactions realistic and heartfelt. He captures the way we realize that people change and grow, and that even if we're ashamed of something we've done, it's our future actions that count, and as obvious as this should be, it still seems like a life-changing epiphany, at least for the characters. What could be a cliched series of maudlin speeches ends up being a warm, beautiful depiction of humanity, something relatable and recognizable in ourselves and the world around us. That's a pretty great achievement, and it's the kind of thing that gets one excited for more work from the creator, even ten years on.
Posted by Unknown at 6:00 PM