Blue: It's like a support group for sad immigrants 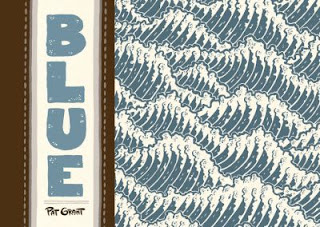 It's hard to know what to think about this book, since it doesn't really attempt to answer any of the troubling questions it raises, but it's certainly lovely to look at. Pat Grant has a beautifully bubbly art style that he uses to craft the wonderfully detailed setting of the bucolic (and fictional) small Australian town of Bolton, making it seem like something out of a colorful children's cartoon (even while sticking to a palette of blue and tan), all rounded corners, lush foliage, stylized ocean waves, and expressive characters composed of curves and ovals:

Grant uses these elements to compose a gorgeous trip down memory lane, telling a semi-autobiographical tale of three teenagers skipping school to go surfing, then ending up walking up the coast in a Stand By Me-like quest/dare to view the remains of an unfortunate who was hit by a train. This all gets intercut with flashforwards that demonstrate an unhappy present in which the town has become run-down and populated by immigrants, the main character stuck in a job painting over graffiti. It would be a pretty standard slice-of-life story, were it not for the way Grant depicts these immigrants as actual aliens: blue, tentacled creatures that attempt to approximate human appearance and behavior but can't help but stand out: 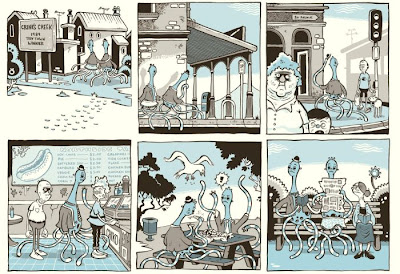 It's an interesting choice, probably an attempt to demonstrate how shockingly different people of other races can appear to those who live a sheltered, small-town life surrounded by only those who look just like them. However, Grant doesn't make any attempt to humanize these aliens, aside from the kids wondering if it's racist to call them "blue people". If anything, they seem to be the cause of the ugly state of the present-day town, having supplanted the population, covered every surface with alien graffiti, and let it all fall into disrepair. At least Christian, the narrator, seems to think so, although he also mentions the local factory shutting down, which would have brought about a downturn in the local economy, turning the town into a low-class haven for immigrants and the poor. But Grant leaves it up to the reader to figure this out, so while he doesn't exactly encourage the interpretation, one could read the story as something of an anti-immigrant screed.

That doesn't seem to be the intention though. Grant presents the kids' day as something of a turning point for them, the moment when the approaching responsibilities of adulthood became overwhelming, the spectre of death suddenly present, the carefree days of childhood slipping away forever. But instead of approaching the scary future as a challenge to be met, Christian has surrendered, allowed it to destroy him, and placed the blame on an easy target that he hasn't attempted to understand. Maybe this comes from that attempt of Bolton itself to retreat to a simpler time and shut out the realities of the greater world, leaving its children unprepared for the difficult realities they would have to face. It's mostly left up to the reader to interpret, which makes the book something of a challenge, albeit a lovely one that is certainly worth taking. Could Grant have expanded on his themes and fleshed the characters' futures out a bit? Sure, but what's here works really well, and it's a great demonstration of Grant's talent. He certainly didn't get stuck in a small town lamenting a world he doesn't understand, and it should be fascinating to see how he tackles his next challenge.
Posted by Unknown at 12:00 PM