American Barbarian: That's what they should call Tom Scioli from now on 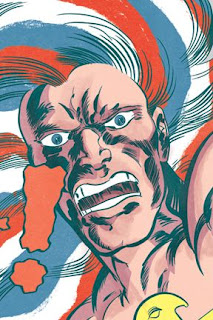 It's hard to tell exactly how to take this book, given its straight-faced, unironic take on Jack Kirby-style action-adventure. On the surface, it's kind of dumb (if rather enjoyable), but the title itself begs for a symbolic interpretation. And yes, this is certainly possible, but it's not exactly overt. It takes place in a post-apocalyptic version of North America, which has splintered into several warring factions, all of which are now threatened by a monstrous enemy. The home kingdom of the eponymous character and his family, all of whom sport red-white-and-blue hair, takes an isolationist approach to their neighbors, leading to their downfall when attacked by a force intent on their destruction. In sorrow, the American Barbarian sets out for revenge, but his morals are compromised by his thirst for his enemy's blood, and he ends up inflicting a greater atrocity upon innocent victims than what he sought to avenge. Later, he rouses a complacent populace from the pointless worship of a mindless, life-consuming god to defeat the enemy that seeks to usurp his own power, and he wages a final battle that might require his own sacrifice to prevail. This could all be taken as symbolic of modern American conflicts both internal and external, and it's vague enough that people of any political stripe could probably map their opinions onto it. But while Tom Scioli might intend for some interpretation to be made, he leaves that work to others while he just has fun crafting a crazy world filled with over-the-top characters, monsters, weapons, names, and conflicts, then smashing them all together like a kid playing with action figures. 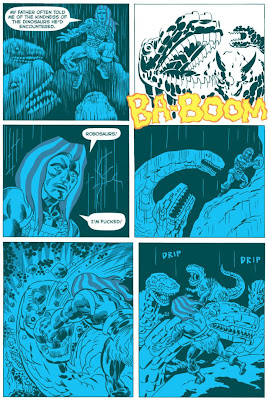 It makes for a pretty awesome book to read, and even though Scioli doesn't have Kirby's level of moral complexity, balls-out creativity, or crazy energy, he comes about as close as anybody has since the heyday of the King, and he puts enough of himself into it to make it unique, rather than being a slavish copy of past glories. He does stick with the chunky Kirby style, but he sexes it up a little bit (one of the few female characters gets captured, stripped to her goofy-looking skivvies, and put on display like Slave Leia), and he fills it with plenty of his own personality, adding spray-paint blood splatters and some weirdly cartoony faces (perhaps to demonstrate the unquestioning simplicity of the religious followers), throwing in plenty of swearing and vulgarity (giving the writing the feel of a teenager trying to add "maturity" to the silly comics they used to read), and amping up the design of everything from the villainous pharaoh Two-Tank Omen (who, yes, has tanks for feet) to the dinosaur-riding characters who wear armor that makes them appear to have miniature dinosaurs riding on their heads and shoulders. And on top of that, he adds more stylistic flourishes, like soft watercolors and ink washes: 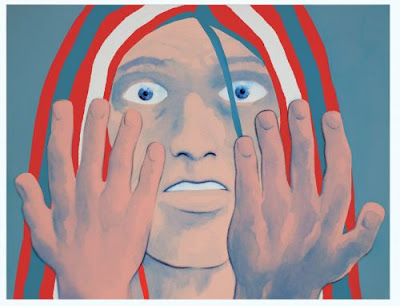 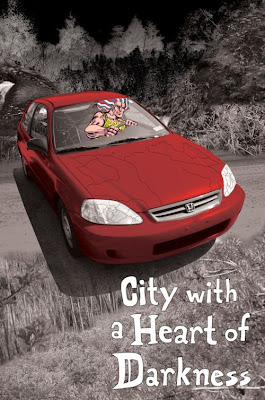 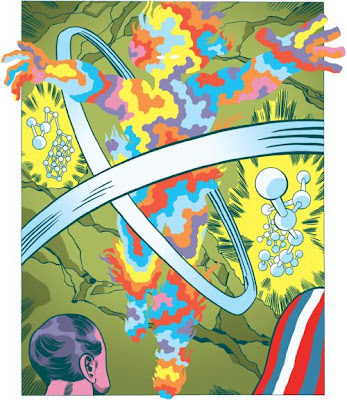 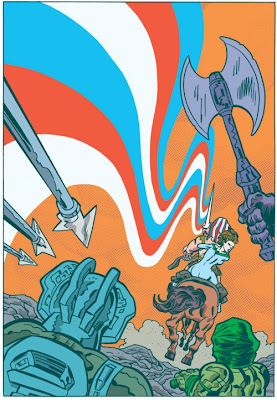 The art does become oddly stiff at times, making for a weird disconnect when a gorgeously dynamic spread of the main character in battle is followed by something like this: 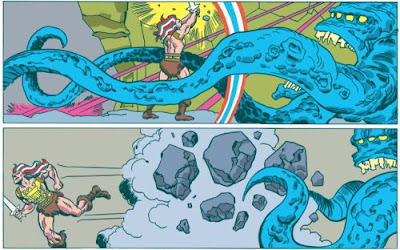 But for the most part, the action flows beautifully and excitingly, so Scioli might be using this occasional awkwardness to emphasize that he is still only a shadow of Kirby's mastery.

Whatever the reasons Scioli has for making the comic the way he did (its original online serialization should also be taken into account; there is a bit of a "making it up as you go" feel, whether that was intended or not), the result is a pretty great example of awesome comics, highly entertaining and energetic action that hits the receptive reader right in the nostalgia center of the brain and then tweaks it just enough to make it feel different. For those of us who dig that sort of thing, it's a full, satisfying experience, making one ready to follow Scioli down whatever path he wishes to tread.
Posted by Unknown at 6:00 PM