"You jammed people who can jam right back, Mister Fez!"

I'm not sure why I took such a long break in doing these (it's been almost two and a half years!), but here's a Fourth World Panel, from Mister Miracle #15: 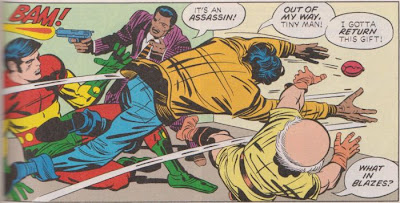 This issue is only so-so, perhaps reflecting Kirby's flagging interest as the series neared cancellation, but it does introduce Shilo Norman, a new cast member and protege of Scott Free. The panel above is a good introduction to him, but he also gets in a decent fight scene later. The plot is almost rudimentary, starting with a demonstration of an escape in which Barda attempts to crush Scott with a "giant nutcracker". After they take in Shilo, who is in hiding from the criminals who killed his brother, he runs off to get his own revenge, and Scott and Barda follow him and help him stop the bad guys just before they murder a hotel full of rich people and steal all their stuff. Not much in the way of cool Kirbytech, awesome action, or quotable dialogue, although I do like the bad guy's outfit: 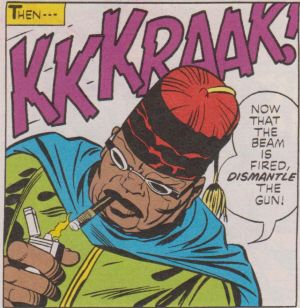 I fear we're in the dregs of the Fourth World here, but I hold out hope that it ends well, eventually. If not, there's always Kamandi, right?

Next: "Shilo Norman, Super Trouble!"
Posted by Unknown at 7:00 PM