A Bride's Story: It's best when it's all about her 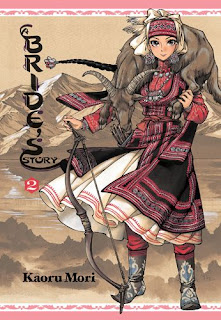 The centerpiece of this second volume of Kaoru Mori's excellent manga series features an exciting battle between main character Amir's blood relatives, who want to reclaim back from the family she married into, and all the villagers in the town where her in-laws live, who refuse to allow her to be taken away by force. But as high stakes as the drama is, it's the least interesting part of the volume, probably because Amir herself is sidelined during the action, left hiding in her house while the menfolk do the fighting for her. It's a necessary arrangement, due to the social mores of the nineteenth century Central Asian setting, but it strips away the best part of the series, which is seeing the day-to-day interaction of the rich characters and the details of their lives.

No, the real best parts of this volume are the scenes in which Mori just shows Amir and those around her going about their daily routine, with occasional focus on one aspect of their culture or a certain relationship. A particular highlight in this volume is a chapter about the embroidery that the women in the family do, with Mori marching panel after panel of intricately designed fabrics across the pages, letting the reader react along with the characters to the beauty of the painstaking work: 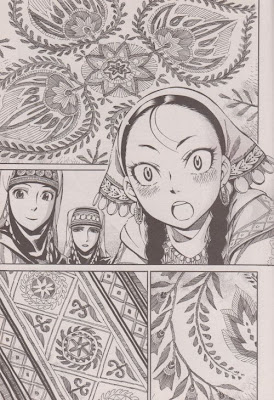 Mori is great at drawing readers in to these sorts of scenes, filling them with energy and life and making them seem like enveloping environments teeming with sights, sounds, and smells: 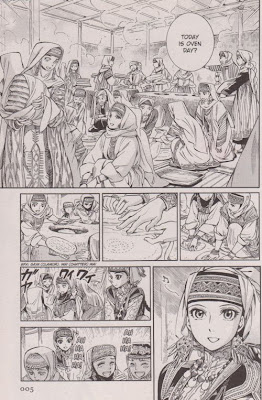 She'll even often drop out sound effects and dialogue to let moments play out completely visually, and the results are often enrapturing, especially when detailing Amir's relationship with her young husband, Karluk. Their love and affection really comes through in moments like the two of them sharing a cold night on the road: 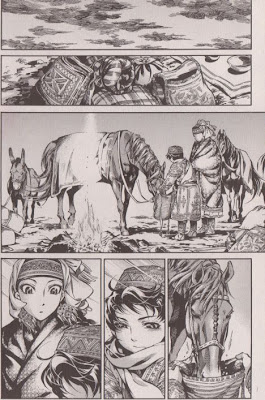 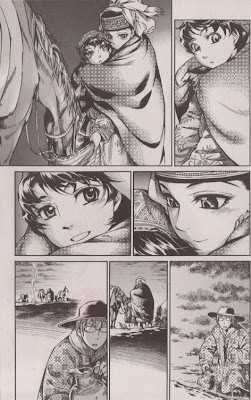 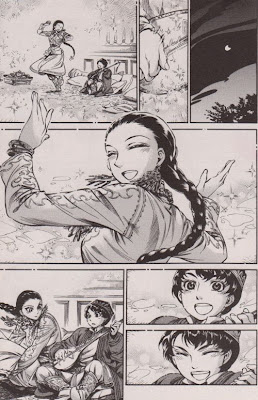 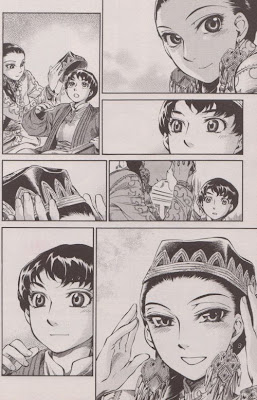 Mori is such a talented cartoonist, this all comes off as effortless, but it's an impressively enveloping achievement, one that captures readers' imaginations, making them want to stay in this recreated past indefinitely. That's something that few creators can accomplish in any medium.
Posted by Unknown at 6:00 PM