It was hard choosing a quote for this post title, so here are a couple more from Mister Miracle #17: "This is 'endsville', baby! You won't bug us any more!", "Take me to my friends--and save all your teeth!" and "Goshamighty! It's a festival of felons!" As for today's Fourth World Panel(s), here are two demonstrations of why Shilo Norman was a cool addition to the series:

If the series was going to be stuck on Earth, with the heroes having adventures against criminals and mad scientists, Shilo seems like a decent replacement for Scott (and Barda), a normal human who is closer to the level of these bad guys than the god-powered heroes. Maybe that was the thinking, or maybe Kirby just wanted to keep creating more characters. It didn't really matter, since next issue is the last one, and it seems to bring back most of the old cast for a send-off, like a series finale should.

But for this penultimate installment, we've got a fun riff on the old plot where the heroes stay at a suspicious-looking inn that is probably haunted or booby trapped or something. That much is obvious from the get-go (which doesn't waste any time; the first page sees Scott, Barda, and Shilo knocking on the inn's door, dispensing with any broken down cars in the countryside or late-night stops overcome with exhaustion); just check out the moustache on the innkeeper: 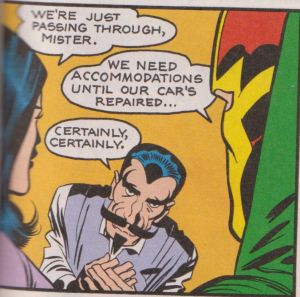 Come on, nobody with that kind of facial hair can be anything less than dastardly.  Sure enough, he uses gas and "electro-jolts" and "inferno rooms" to try to kill them, but amusingly, it's not because of orders from Apokolips, but because he's confused them with a "Tricky Trio" of criminals that he was contracted to murder. That sets up a punch-em-up finale that lets Barda look as badass as usual with the following sequence: 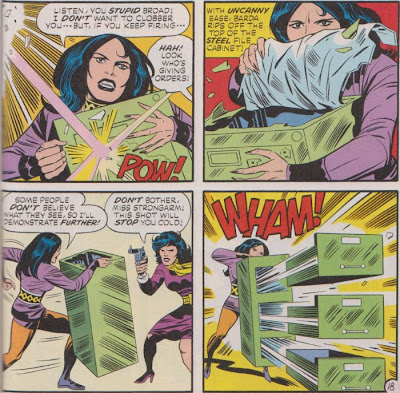 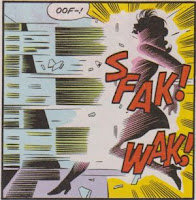 Fun times, although having cosmic-level heroes routinely face off against gangsters and thugs (even ones armed with sci-fi death traps) is definitely not the best use of Kirby and the milieu he dreamed up. If this is what he was reduced to, I guess it's best that he ended it and moved on.

But while it lasts, I did want to note one aspect of his work that I like: the extreme close-ups. Kirby would throw these in in the middle of talky scenes, I suspect to liven up what could be a standard back and forth, but he did it with such flair, turning these panels into a sort of punctuated beat in the dialogue. For instance, here's the innkeeper looking sinister, his bad intentions conveyed by the angle of his face and the way his eyes peer up through the eyebrows: 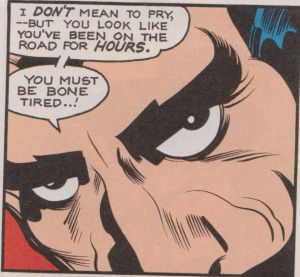 In contrast, Scott's anger at the attempt on his life comes through in his narrowed eyes and the dark shadows across his face: 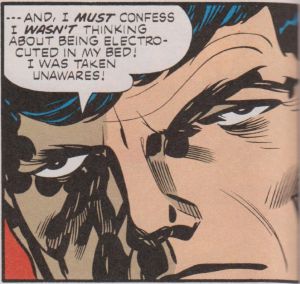 And this Barda panel makes me wonder how often the words "Kirby" and "fart joke" have been paired together: 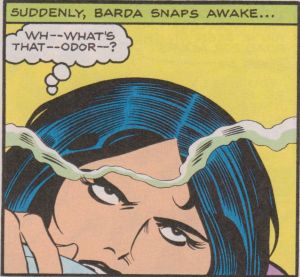