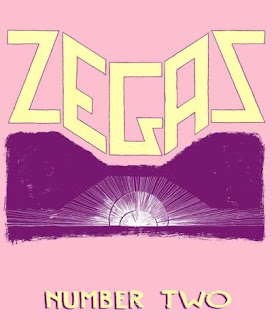 Michel Fiffe is a relentlessly creative artist, constantly coming up with fascinating new visual ideas for communicating emotion, thought, music, motion, and all manner of happenings, both "realistic" and "magical". But with this second issue of his self-published series (which comes in a beautiful magazine-size presentation, vivid colors popping off the pages, and a thickness that makes for a satisfyingly hefty "pamphlet"), he continues to reveal a flair for interpersonal moments and subtle emotions to balance out the eye-popping visuals that he does so well. The series continues to follow brother and sister Emily and Boston Zegas, as the former searches for a job that will allow for some artistic self-expression, and the latter meddles in others' relationships without being able to sort out his own. It's a nice, low-key drama, with smaller moments transitioning into brightly-colored spreads of energy and life, bursts of color and exaggerated cityscapes emphasizing the teeming, bustling metropolis full of life just outside the window, right alongside this small slice of humanity that we're privileged to witness. 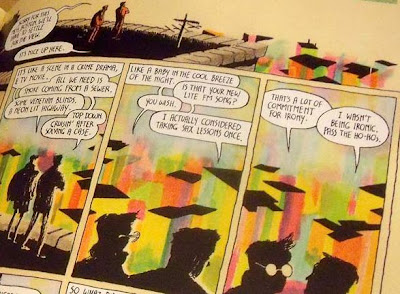 Fiffe manages to capture the best of both worlds here, with the most gripping moments consisting of small moments and conversations (a scene between Boston and a paramour of Emily's especially stands out on this front, with the page splitting into myriad small "talking head" panels, making for a fast-paced back-and-forth), and visual delights worked into and in between these scenes, an exciting energy and creativity always present on the page. Thoughts shoot out of characters' heads like lightning bolts, music bursts from speakers in multicolored torrents of energetic constructs representing pure sound, dancing nightclub-goers dissolve into neon lines jittering across crowded scenery, a musical act blasts across a two-page spread in eye-searing pinks and barely-comprehensible slashes of color, and another conversational scene winds its way across an impeccably-designed pair of pages in a beautiful Frank King/Chris Ware homage: 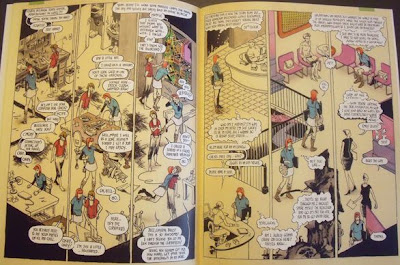 It's a lovely comic for both the eyes and the mind, but perhaps even better is "Habana '76", the short story that fits between the bookended parts of the issue's main story. It stands out by being rendered in stark black and white, and it seems to be inspired by Love and Rockets, following a young man in a Latin American country as he searches for cigarettes, flirts with a girl, clashes with her father, and then stumbles into a scene of seemingly greater significance. It's a beautifully human story, full of realistically-posed figures moving in relation to each other, their gestures captured in Fiffe's flowing brushstrokes, with the lines devolving into harsh scratchiness for a physical confrontation, then snapping back into clarity once the moment has passed, while still seeming on the verge of chaos, the characters' energy barely contained within the panels. It's a gorgeously human story, pulsing with life in a way that manages to be unique even next to the brilliant gleam of the rest of the issue surrounding it. 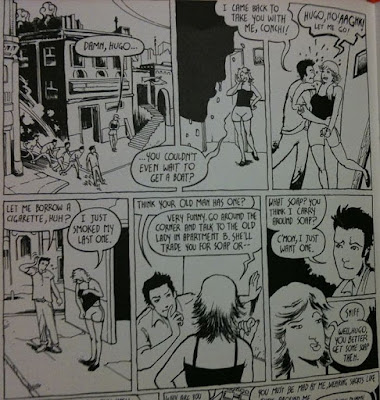 With this series, Fiffe is continuing to display a boundless excitement for comics and the infinite possibilities for communication that the medium provides. It's exciting to watch him continue to grow and develop as a storyteller and artist, so hopefully this will continue for as long as he wants to keep producing it. I know I'll be reading it as long as it does.
Posted by Unknown at 11:07 PM