Art what I like: Fiona Staples is a hell of an "actor"

There's a panel in the second issue of the new Brian K. Vaughan-written series Saga that kind of blew me away in how effectively the artist, Fiona Staples, conveyed emotion in a character's face. It's a key moment in which one of the main characters threatens to kill her own newborn child to keep it from falling into the hands of an enemy (oh yeah, spoilers, I guess), and while that might be a bit melodramatic, Staples sells it by somehow capturing the complex tangle of unbearable sadness and angry defiance that must be going through the character's head: 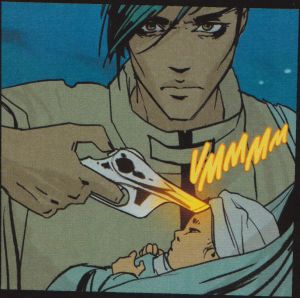 It's a pretty amazing feat, something that would be near-impossible for a flesh-and-blood actress to believably pull off, but there's something about the set of the mouth and the lines around the eyes that lets us know exactly what's going through her head, sucking us right into the scene as if we're there on the alien planet, caught up in the high-stakes drama.

Staples isn't limited to subtle emotion either, which is good when it comes to a crazy interplanetary adventure like this one. There's some great world-building scenery and exciting action, but the other thing that I found particularly striking about this issue is something that I won't share here, since it's so much more effective on the page: a character design that's creepy, disturbing, and threatening, something alien that combines human sexiness with insectile nastiness in a way that's truly memorable. It's another great example of the well-thought-out quality of this series, and a sign that it will continue to be a comic to enjoy for some time to come.
Posted by Unknown at 6:00 PM

Email ThisBlogThis!Share to TwitterShare to FacebookShare to Pinterest
Labels: Art What I Like, Brian K. Vaughan, comics, Saga