One of my favorite aspects of comics conventions is that no matter what else happens, I always discover creators and comics that I didn't know about before and want to learn more about. Here's just some of what was to be had at C2E2 this year, and I'm sure there was plenty more that I completely missed. 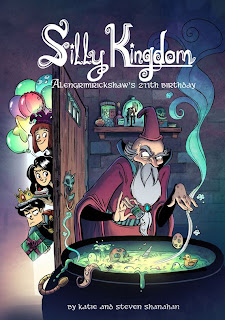 Katie Shanahan has a wonderfully cartoony style, full of energy and humor. I really need to check out her book Silly Kingdom, as well as her contributions to the anthologies Cautionary Fables and Fairy Tales and Womanthology: Heroic. 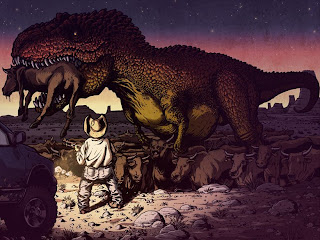 The work of Outland Entertainment looks pretty cool, including the series Windfall (pictured above) and Ithaca. I talked to Jeremy Mohler, who does layouts, lettering, and coloring, working alongside other artists in the "collective" on what looks to be quality comics. He and I share a lot of opinions about webcomics, and comics in general, so it should be really interesting to see this work develop. I expect great things. 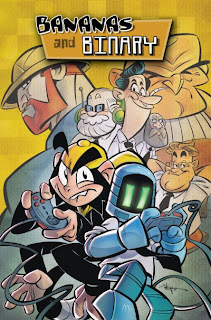 Scott Brown and Enrique Rivera's Bananas and Binary seems like a fairly standard webcomic (it stars a monkey and a robot, of course), but I do like Rivera's cartoony art style, and he had some pages of a proposed graphic novel on hand that were pretty great. I'd love to see that finished at some point, but this series looks pretty entertaining for now. 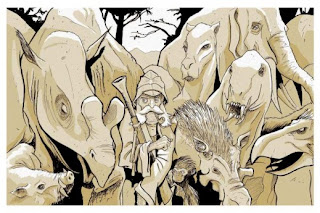 I liked what I saw of Blunderbuss Wanderlust, an educational book about the adventures of the time-traveling Coloner Victor Von Vector by David Shapiro and Christopher Herndon, who also have several other nice-looking books out under their Craigmore Creations label. 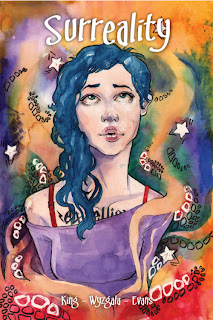 Surreality, a new webcomic by Caleb King, Carla Wyzgala, and Andy Evans, also looks really gorgeous. It appears to be a slice-of-life story with a lot of nerdy references, and maybe some magic or something? It launches on May 8, so check it out.

And for other stuff I thought was interesting, but might or might not turn out to be ready for prime time:

Mike Roll's art on the Apooka series of books, which star "The World's Most Adorable Zombie", is really cute, with a color palette that reminds me of Frank Espinosa, but I'm not sold on the stories themselves, and I've been over the various iterations of zombies for a few years now. Still, it's worth a look

I like the style of Dave Wheeler and Samir Barrett at Mindwave Comics, although I don't know if their actual comics are really up my alley.

The Vescell series from Image sounds pretty cool, a sci-fi concept involving the transfer of people's minds/consciousnesses between bodies. The art seems like it might be a bit computery, but I'll check it out, given the chance.

I don't know if the webcomic Keeper, by Geoffrey D. Wessel and Jeff Simpson, is any good, but it's about a soccer goalkeeper who is also a serial killer, and it has some nice painted coloring.

I kind of like the art of Michael Arthur, even if it seems like it might sink into the bog furry-oriented perviness. He's got an expressive style that's just a bit weird, in a good way. Oh, and it looks like he also contributes to my friend Noah Berlatsky's site The Hooded Utilitarian!

I wouldn't mind checking out more of Modern Tales of the Future, from Dread Arts Company.

Antonio Romero has kind of a cool style, combining dense cross-hatching and scribbly shading with stark, woodcut-style imagery. I'm not sure if I really get what's going on in his comics, but they certainly look unique and worthy of further investigation.

Ryan Dow's Introspective Comics looks to be a cute autobiographical webcomic in which he regularly converses with a little apparition of Buddha. That's nice.

Gavin Smith has a really polished, realist style that could turn into something amazing, given practice. I'm not so sure his comic Human City, which is some sort of post-apocalyptic, mutant-fighting thing, is for me, but there's some cool stuff going on in the art nonetheless. He's one to keep an eye on.

Nidhi Chanani apparently just does illustration, rather than comics, but her art is gorgeous, well-composed images featuring simple characters and beautiful coloring. I could look at it for hours.
-----

That's far from everything I saw, but even this taste is a lot to process. I look forward to following these creators and seeing what they do next.
Posted by Unknown at 11:45 PM