Art what I like: Sometimes it's all in the eyes

The most recent (and, sadly, penultimate) collection of Brian Wood's Northlanders features the good stories one would expect, but I found one in particular to be especially nice, at least from an art-based perspective. That would be issue #40, "The Hunt". Illustrated by Matthew Woodson, it's a simple story about a hunter tracking a deer across the frozen wastelands in the north of Sweden. Wood's story sells the life-and-death struggle of the lonely man who is motivated by the need for survival, but goes beyond the normal effort out of some extra, human impulse (Pride? Anger? Desperation?). But what I found especially striking about the story is Woodson's art. He details the snowy forests in a lovely manner, but goes someplace extra when depicting the emotions that cross the hunter's face, especially his eyes. There's something fascinating about how much he is able to convey through silent expressions, with information gathering around the hunter's piercing blue orbs. His look of tired determination near the beginning of the story is an immediate signal of the humanity of his situation:

And when he misses a key shot, the look of anguished defeat he gives is all too relatable, even to those of us who aren't experienced with needing to succeed in our efforts or starve: 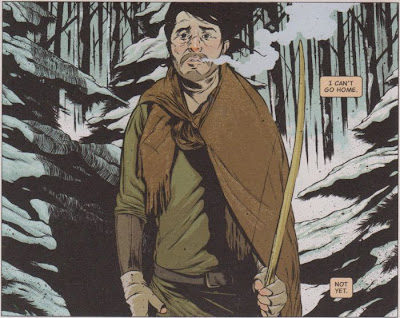 Near the end of the story, things get grimmer and grimmer, the hunter's eyes eventually communicating a resigned acceptance of his fate, but with a determination to keep going to the end: 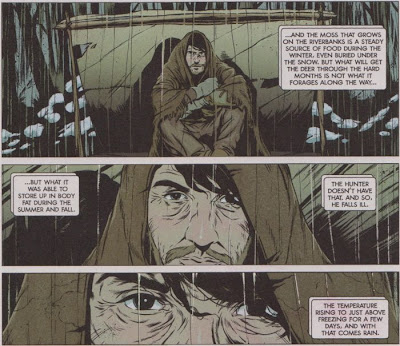 And on the other side of the coin, Woodson even manages to wrangle heartwrenching expression out of the prey: 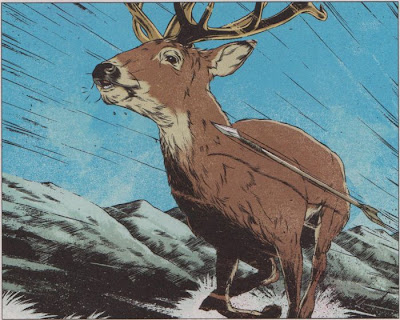 It's beautiful work, and while I'm not sure I fully understand the ending of the story, it struck me as one that really exemplifies this series at its best, in that it brought the past to life in a way that emphasized the humanity of these characters, real people struggling for survival in a world that's completely different from anything in our modern experience, yet rendered comprehensible through the connection we all share. I'm really going to miss it.
Posted by Unknown at 6:00 PM

Email ThisBlogThis!Share to TwitterShare to FacebookShare to Pinterest
Labels: Art What I Like, Brian Wood, comics, Northlanders