Infinite Kung Fu: Or at least too high to mathematically calculate 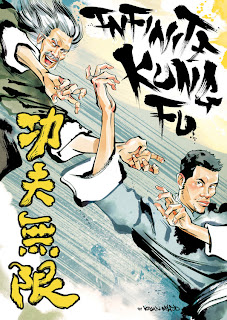 As a connoisseur of martial arts cinema, I think I can definitively state that Kagan McLeod gets it. He's a true fan, and he's demonstrated as much by not just endlessly talking about how cool the various Bruce Lee/Gordon Liu/Jet Li/etc. movies he's seen are, but by creating his own kung-fu epic from whole cloth, and setting it down in awesome detail in this thick volume. The love of the genre shines through on every page, with clear, well-choreographed action bursting from the panel borders, imaginative names for badass moves and techniques, colorful characters that fall into well-known archetypes but still vibrate with life, and an epic story involving the fate of the "martial world", with all these aspects working together and expanding to fill the numerous pages and none of the space wasted. He uses the limitless budget of comics art to dream up ever-cooler ideas, from armies of zombies attacking the living due to an afterlife that is full-to-bursting with souls waiting to be reincarnated and mystical figures looming over conflicts from other planes of existence, to diverse settings like ornate palaces, deserted wastelands, modern cities, and Shaolin temples and imaginative fights that involve robots, animals, body-switching, and the removal and regrowth of limbs. It's pure awesome from start to finish. 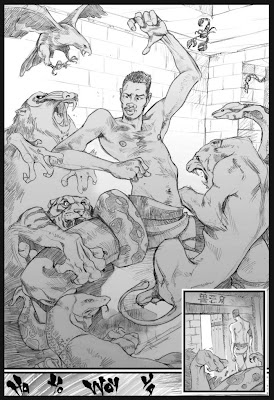 It can often seem that plots don't really matter in martial arts films (or rather, if the action is good enough, a poor-to-nonexistent plot can be forgiven), but McLeod still crafts a pretty compelling story here, following a young man named Lei Kung as he gets drawn into a conflict between a group of immortals and their wayward protégés, who have fallen under the spell of an evil, undead emperor that is trying to reunite the pieces of his cursed armor in order to be reborn, an event which will surely lead to the world's destruction. Lei Kung trains and discovers new skills throughout his journeys until he's ready for the final, epic conflict, spending time in a prison learning techniques by battling deadly animals, at the venerable Shaolin Temple gaining wisdom and inner peace, and consulting with immortals to discover the very secrets of life and death. We also take occasional breaks to watch other players in the grand conflict, including the badass Moog Joogular, another student of the immortals who, in an especially awesome sequence, ends up in a fight against the emperor's centuries-old queen, both of them using their own severed arms as weapons. 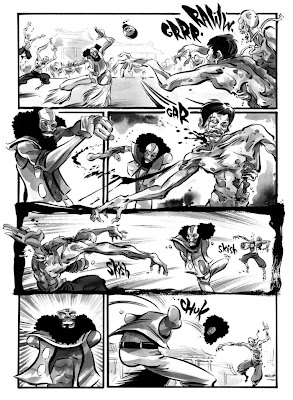 McLeod's deep knowledge and obvious love of the genre is evident, but the whole thing is really brought to life by his gorgeous art. Images flow across the pages in beautifully inky brushstrokes (along with perfectly textured graytones and thin-lined flashbacks that have a spooky, ghostly atmosphere), the characters cleanly defined and clearly delineated, figures making spatial sense as they interact physically, and everything moving dynamically in a gracefully violent dance. It's something to marvel at, but the action moves so propulsively, it's hard to stop turning pages long enough to take it all in. 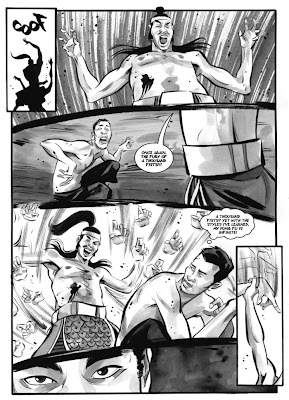 But occasionally, one has to stop and stare at the imagery McLeod creates, especially the meticulously detailed settings like a marshy wasteland that resembles a skeletal arm and hand from above, or a giant Buddha statue that is the scene of a massive battle, with hundreds of combatants swarming from the statue's base to its head. There's always something new to see here, and more exciting action to be had. Characters live and die, new fighting styles are discovered and developed, all manner of weapons are used to draw blood, and quests of personal fulfillment and world-affecting import are waged. This is an amazing comic, full of just about everything one could ask for in a martial arts adventure story. McLeod has raised the bar for kung fu on the page, such that this is now the standard anyone hoping to follow in his footsteps is going to have to live up to. If we're lucky, many will attempt the task. Let the new age of kung fu comics begin!
Posted by Unknown at 12:00 PM